The wins just keep on coming for the Schitt's Creek cast.

While it's been over a year since the Rose family swept at the 2020 Emmy Awards, these past few weeks have proved quite fortuitous for the cast members. Earlier this month, Dan Levy (David) and his father, Eugene Levy (Johnny), both became ﻿New York Times ﻿bestsellers when their ﻿Schitt's Creek ﻿tie-in book, Best Wishes, Warmest Regards: The Story of Schitt's Creek, climbed into the NYT nonfiction list. Meanwhile, Sarah Levy (Twyla) recently got married and gifted fans with a few gorgeous photos from her wedding.

Now, it looks Catherine O'Hara has a reason to celebrate. The actress who filled the iconic role of Moira Rose just got recognized with a Governor General's Performing Arts Award. This prize is meant to recognize performers for their “outstanding lifetime contribution to Canada’s cultural life.” At the ceremony, O'Hara was recognized alongside other major celebs, like Ryan Reynolds.

To celebrate the moment, the ceremony included a special performance from Noah Reid, who portrayed Patrick on the series. O'Hara's co-star did a cover of Joni Mitchell's classic song, “A Case of You,” and the actress is seen crying while she watches the performance.

The video was shared by the National Arts Centre in Canada, along with a caption that said, “Catherine O’Hara cries as Noah Reid sings 'A Case Of You.' During the @ggpaa_pggas. Watch now on @cbcgem. #ggawards #schittscreek.”

In the video, Reid also adds a humorous element by donning a variety of wigs throughout the clip, recalling the many bold wigs that O'Hara wore during Schitt's Creek.

The recognition was celebrated by one of O'Hara's other co-stars, Dan Levy, who shared the video to his own Instagram and said, “Catherine received the Governor General’s Performing Arts Award tonight. And this is how @olreid chose to honor that. Will never be able to watch this enough. Congratulations, dear Catherine!” 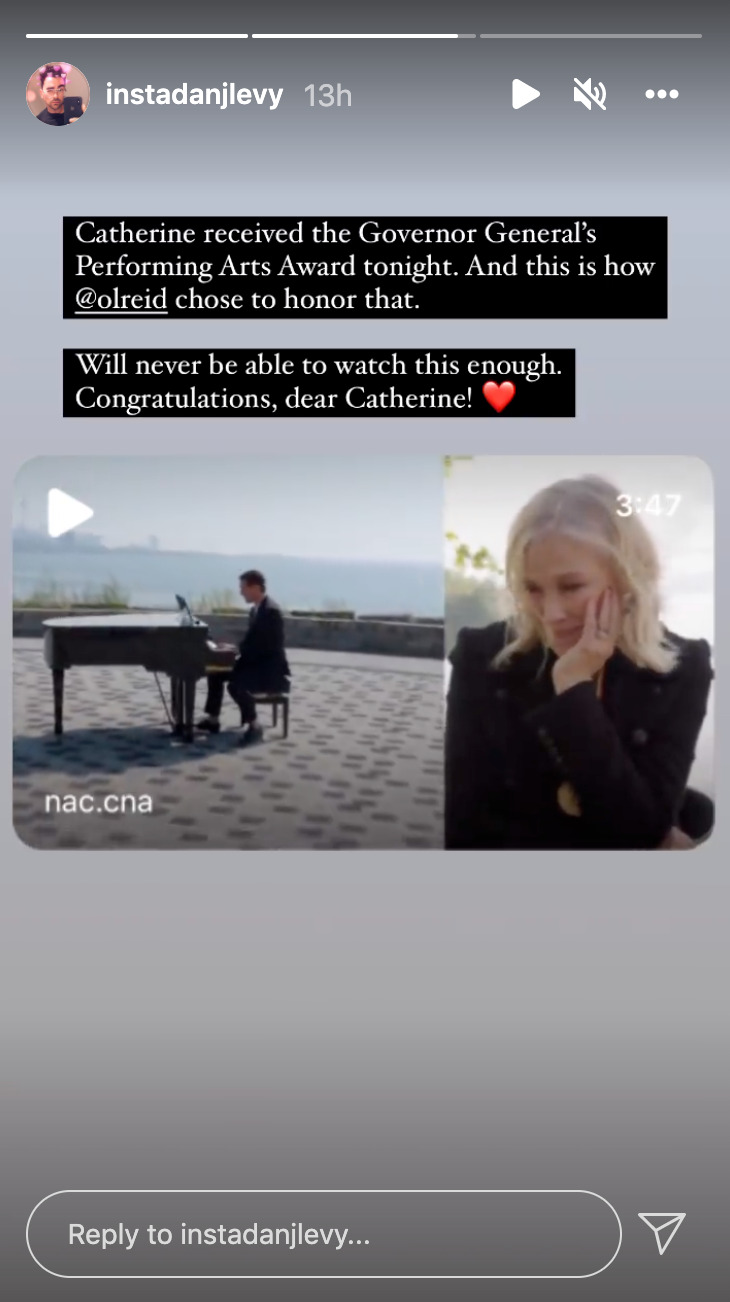