As to be expected, many of the Super Bowl commercials for 2022 include major names, with one of the most anticipated spots being a Nissan ad that features a Schitt's Creek and Marvel Cinematic Universe crossover.

Luckily for us, the clip—which features Brie Larson, Danai Gurira, Dave Bautista, Eugene Levy and Catherine O'Hara—has been released ahead of time, and it's like a Fast & Furious movie all in the span of a minute. And to get more deets on the making of this major collab, we sat down with Larson to talk about her experience filming it.

While the Captain Marvel actress revealed how fun it was to work on the clip, she said there was one star who she was especially excited to collaborate with: Eugene Levy.

“It was unbelievable. I have been such a fan of [Levy] since I was a kid,” Larson confessed. She also divulged that similar to his iconic Schitt's Creek character, Johnny Rose, Levy was always dressed to the nines while on set, and he even helped to craft the look for the character he plays.

“He's so kind, so funny and a really hard worker,” Larson said. “I just loved how passionate he was about [the commercial], from what kind of suit he would be wearing to what his hair and facial hair was gonna look like, I mean, he just put a lot of thought into this character arc that you see in the commercial.” 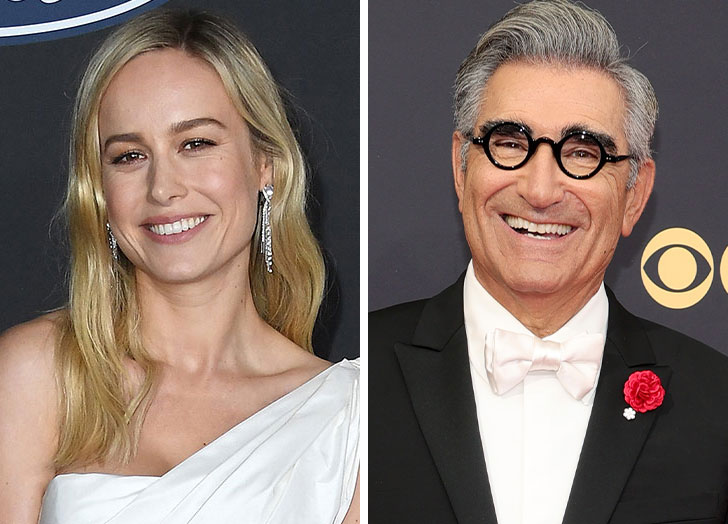 The 32-year-old actress felt honored to work with the timeless comedian, saying, “It's one of those surreal moments where it feels like somebody that's lived in your TV your whole life is suddenly three-dimensional in front of you.”

Along with Levy, Larson also got to work with another Schitt's Creek star, Catherine O'Hara, and when asked if she was a fan of the show, Larson said, “Yes! Of course.”

Two iconic worlds combined. This ad is just one of many that we'll be looking forward to when the Super Bowl airs this Sunday, February 13.

﻿Want all the latest entertainment news sent right to your inbox? Subscribe here.﻿