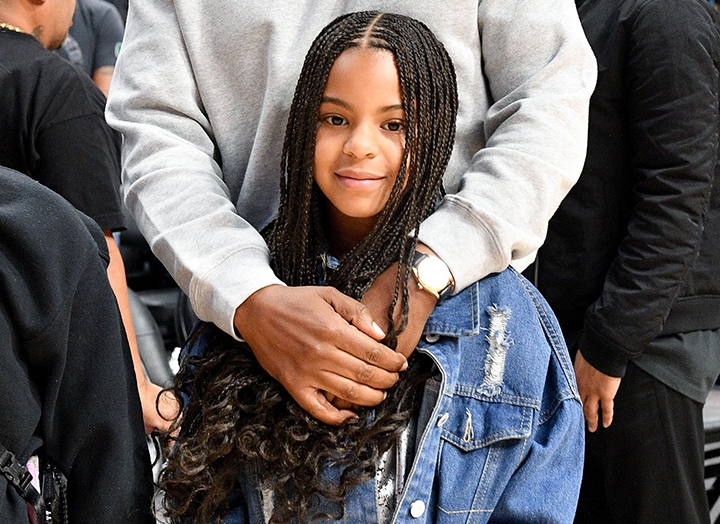 Blue Ivy Carter’s list of accomplishments is more than impressive. She’s mastered the cat-eye, become an award-winning songwriter, landed a spot as one of the trendiest kids in Hollywood and she’s not even nine years old. Meanwhile, we were collecting American Girl Dolls and watching Mary Kate & Ashley movies at her age. Now, she’s adding another accolade to that list: a BET Award.

On Sunday, the oldest child of Beyoncé and Jay-Z won the BET Her Award (alongside Wizkid and SAINt JHN) for her part in Beyoncé's “Brown Skin Girl,” which the 8-year-old helped write alongside her mother and which landed on the Billboard Hot 100 charts. The award recognizes neo soul and traditional R&B artists.

“Brown Skin Girl” is from Beyoncé's compilation album The Lion King: The Gift that was released last July in conjunction with the Disney movie, in which Beyoncé voices the lioness Nala. In the catchy and empowering tune, Blue Ivy harmonizes with her mom and even drops a little solo at the close of the song, proving she definitely has her parents’ musical genes.

Congrats, Blue Ivy! We see quite the successful career ahead of you.

news
by Dara Katz
From a Quartz Roller to Abundance Candles, These Are Best Crystal Gifts for Each Zodiac Sign
news
by Greta Heggeness
Kelly Ripa’s Surprise ‘Live’ Guest Co-Host Is a Very Famous Face
news
by Karelle Mckay
Sofía Vergara Dons Sheer Corset (and Shows Off Her Impressive Shoe Collection) in New IG Pic
news
by Karelle Mckay
Prince Harry Dressed Up as This Superhero to Surprise Kids with a Special Message
news
by Joel Calfee
Lindsay Lohan Shocked the Internet with Her ‘Pilk and Cookies’ Video (So, Of Course, We Tried It Out)
news
by Nakeisha Campbell
Priyanka Chopra Stuns in Yellow Swimsuit During Dubai Getaway