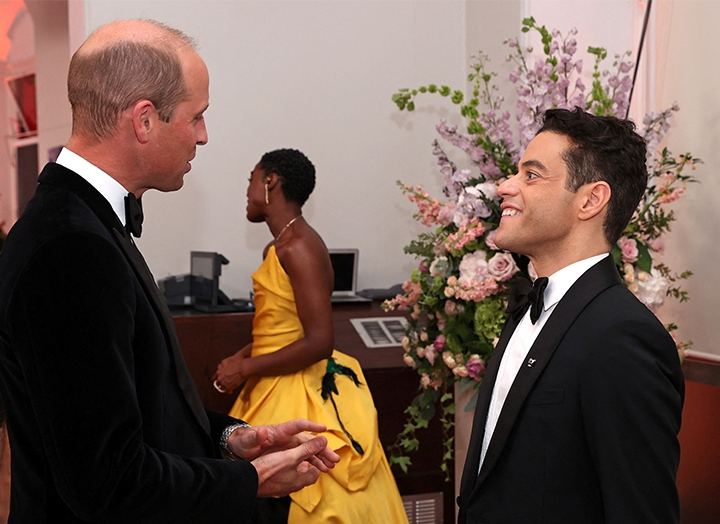 It’s a rare occasion when our favorite members of the royal family collide with Hollywood actors on the red carpet. However, that’s exactly what happened last month when both Prince William and Rami Malek attended the London premiere of the latest Bond film.

On September 28, the Duke of Cambridge and his wife, Kate Middleton, stepped out for the London premiere of the 25th James Bond movie, No Time to Die. When the duo arrived, they immediately met up with fellow royals Prince Charles and Camilla Parker Bowles. Of course, being that it was a major movie premiere, they weren’t the only famous faces in attendance. Stars included Daniel Craig (duh), Léa Seydoux, Lashana Lynch, Ana de Armas, Billie Eilish and Malek.

Unfortunately, since our invite must’ve gotten lost in the mail, we don't know what happened inside the walls of London's Royal Albert Hall. Lucky for us, Malek sat directly behind the Duke and Duchess of Cambridge for the viewing and has spilled all of the details.

During his recent visit to E! News' Daily Pop, the Bohemian Rhapsody star opened up about his favorite part of the event: reuniting with the British royals. “Meeting the royals, of course, it was rad. I have to say that,” Malek revealed on the October 4 episode. “I met William—Prince William, Your Royal Highness Prince William—Princess Kate and Prince Charles, of course, at the BAFTAs and to see them again, it was fun, like meeting old friends actually.”

According to the 40-year-old actor, William appeared to be a big fan of the action flick. He continued, “I sat right behind them in the royal box. I was watching Prince William's reaction. You can see a lot from what someone's body language was doing. I think they loved the film. That was the impression I got."

If only there was video footage of that moment.﻿