Meghan Markle and Prince Harry may not officially be royals anymore, but it’s clear they are still thinking like Queen Elizabeth. In fact, the Duke and Duchess of Sussex and Her Majesty decided to share brand-new official portraits in the same week.

On Friday, the Sussexes revealed a new black-and-white portrait of themselves (the first since stepping down from the royal fam) in celebration of their special edition of TIME100 Talks, a virtual event that will include activists, online creators and experts as they discuss how to create better online communities. 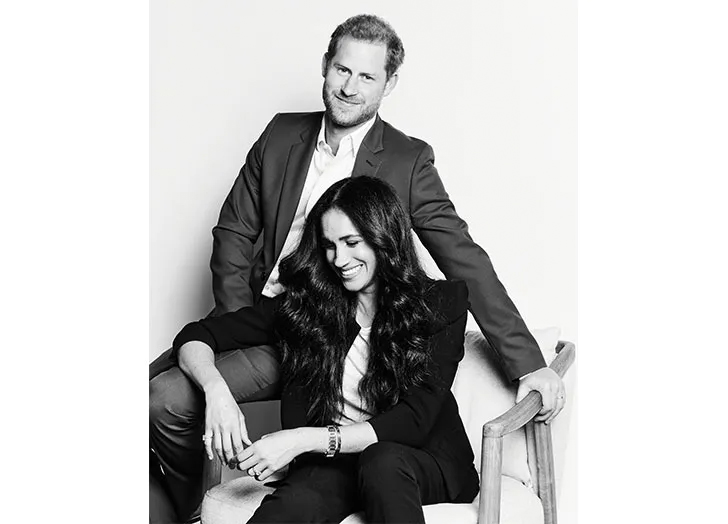 The snap shows Markle resting her arm on Harry's lap (and is it us or does this pose look awfully similar to their official engagement photos?). Shot at their family home in Montecito California, the photo was taken earlier this month by photographer Matt Sayles.

Around the exact same time, the Canadian government released an elegant portrait of the monarch (her first in months) which was reportedly taken last year at Windsor Castle. Royal photographer Chris Jackson also shared the stunning photograph on his official Instagram account, providing some background in the caption.

“It was an incredible honor to have the opportunity to photograph HM Queen Elizabeth II on behalf of the Canadian Government for her official Canadian Portrait that has been released today,” he wrote alongside the photo. “I’ve been lucky enough to have visited Canada many times now with members of the Royal Family and have the fondest memories of the people I’ve met and the incredible, vast and beautiful country that I’ve been privileged to get to know a small part of over the years.”

According to Jackson, the queen is wearing her Canadian insignia as Sovereign of the Order of Canada and the Order of Military Merit. She is also sporting “The King George VI Victorian Suite,” a diamond and blue sapphire necklace and earrings that were given to her by her father King George VI as a wedding present in 1947. “The jewels date back to circa 1850; the matching tiara and bracelet were added to the suite in 1963,” he continued. “The queen wore the sapphire suite in Canada during the 1990 Royal Tour.”

Two official portraits in one week? Although it seems out of the ordinary, it’s likely just a coincidence that the portraits were released so close to one another.

Either way, we’re happy to have them.