Who is Anna Sorokin (AKA Anna Delvey)? Is she a clever con artist who craved wealth and power, or an aspiring entrepreneur who simply got caught up in New York's lavish social scene?

Netflix's new limited series, Inventing Anna, explores this very question with a fictionalized retelling of the true story, where Sorokin, a Russian-born immigrant, posed as a wealthy German heiress and scammed her way through a life of luxury in New York. Helmed by Grey’s Anatomy creator Shonda Rhimes, the series unfolds through the lens of a reporter who's determined to crack the case, and it boasts a star-studded cast, including Scandal alums Katie Lowes and Jeffrey Perry, Julia Garner, Anna Chlumsky and Laverne Cox. But this story isn't merely a biographical account.

Inventing Anna also touches on themes like betrayal and workplace ostracism, and it manages to weave in some timely commentary about the media's response to the #MeToo movement. But most importantly, it paints a more nuanced portrait of the faux heiress.

If you've seen any of Rhimes's shows, then you already know that she his a knack for creating multi-faceted and compelling female characters. Thankfully, Inventing Anna is no exception. The pilot starts off with a flashy montage of Delvey making headlines and getting arrested—complete with a voice-over by the scam queen herself (Garner, not the real Anna). And as one news anchor reports on her misdeeds and multiple charges, including three counts of grand larceny in the second degree and theft of services, she insists, "I did nothing wrong. I work for my success. I earn my accomplishments." Which of course begs the question, what exactly was Anna after?

This is where Manhattan magazine's Vivian (Chlumsky), who appears to be a disgraced journalist, comes in (more on her brilliant performance later). With the encouragement of her colleagues, she works up the nerve to pitch this story idea and immediately gets shut down, but it doesn't stop her from pursuing it, because she knows this could lead to a huge cover story. Without telling her boss, she heads off to meet Anna (Garner) in jail, who's immediately turned off because she expected an official media visit and V.I.P. treatment. She carries herself with confidence and has no filter, which would explain the comical one-liners ("Are you pregnant or are you just so very, very fat?"). But judging by her brief exchange with Vivian, it's still tricky to tell who the real Anna is. One moment, she comes off as a shallow opportunist who only cares about money and her reputation. But for a split second, as she gets emotional and starts to tell Vivian her side of the story (She reveals, "I didn't do anything wrong. This whole thing is some kind of misunderstanding."), you can't help but wonder: Did she really have a different motive? Or is she just playing the victim? 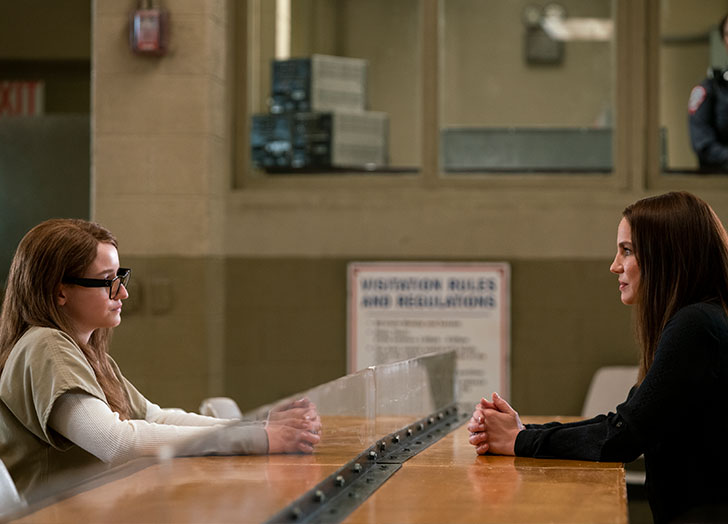 The first episode briefly sheds light on all the conflicting evidence from different sources, which only makes Anna's story more confusing. One acquaintance reveals that she's part of a wealthy German family that deals with antiques. Another former BFF says that she's a Russian with a filthy-rich father. And an art dealer reveals that her family owns an impressionist painting worth $42 million. To be fair, it feels like more than enough to discredit Anna as a greedy, wannabe socialite, but it still doesn't fully address the question of why she went to such lengths to carry out this elaborate scheme. Did she have a vision that went beyond tricking New York's elite and getting thousands of likes on Instagram? Was it as simple as pretending for personal gain, or was she intentional about exposing the flaws in the system? And more importantly, did she ever intend to pay her victims back?

When Vivian asks her about her conflicting stories on the second visit, Anna masterfully deflects her questions by turning her attention to Vivian's mediocre image ("Your feet are too fat for heels...") and, once again, her casual approach to the interview ("V.I.P is always better, Vivian. You just have to be willing to do the work"). But this only adds to the complexity of her character and makes you want to really understand her. Her ability to stay poised and lie with such ease suggests that you can't really know when she's telling the truth. And the fact that she has the smarts to scam banks, private jet companies, hotels and wealthy friends at just 26 years old speaks volumes about her potential. So yes, it's easy to assume that she is driven by vanity and her hunger for fame (she admits to the latter), but somehow, this only feels like a small part of the puzzle.

Aside from Garner's spot-on portrayal of the swindler, Chlumsky also stands out as the passionate journalist (and expectant mom) who just can't resist a good scoop. Her response to her assigned Wall Street #MeToo story feels like a direct criticism of how the media has handled the #MeToo movement, since she defiantly calls her boss out for trying to use terrified victims as clickbait. So not surprisingly, she pours all of her energy into this new story that no one seems to be talking about, even with the odds stacked against her. But it's not just her treatment of this case that's intriguing, it's her refreshingly honest depiction of a frustrated journalist who has to deal with an unsupportive boss, an incredibly tight deadline, a mysterious case that breeds more questions than answers and the pressure to save her reputation—all while dealing with pregnancy hormones.

We see that frustration finally manifest when she has a breakdown during her sonogram appointment, where she repeatedly yells profanity after learning that she's having a girl. In one of her best scenes, she tells her husband, "If you tell me my joy at having a daughter is supposed to make up for the loss of my career, the loss of the thing that lights up my brain, I swear to God I will smother you in your sleep." (Major kudos to her husband for being patient with her in this scene.)

Although this only covers the first episode, it lays a pretty solid foundation and sets fans up for what will (hopefully) be a wild ride—one that we certainly intend to enjoy from start to finish.

Shonda Rhimes strikes gold once again by exploring how the infamous Anna Delvey managed to steal the hearts (and money) of those in New York's high society. With spot-on commentary and stellar performances all around, this eye-opening series will make you reconsider all the headlines you’ve read about the swindler.