The 13 Best Canned Chicken Noodle Soups, Whether You Like ’Em Meaty, Creamy or Vegan

Sure, canned chicken noodle soup is the elixir to end all colds and winter blues. But it’s also so much more than that. We consider it one of the easiest office lunches of all time, a low-maintenance, kid-friendly meal and a timeless last-minute dinner for busy weeknights. But which ones are the tastiest? We tested a slew of ’em to figure out which reigned supreme. Read on for the 13 best canned chicken noodle soups, along with some of our favorite instant and jarred varieties. (There are even a few chicken-less options for vegans and vegetarians.)

The Best Canned Chicken Noodle Soups, at a Glance

Before we get into our top picks, here’s how we determined the best canned chicken noodle soups for every need. 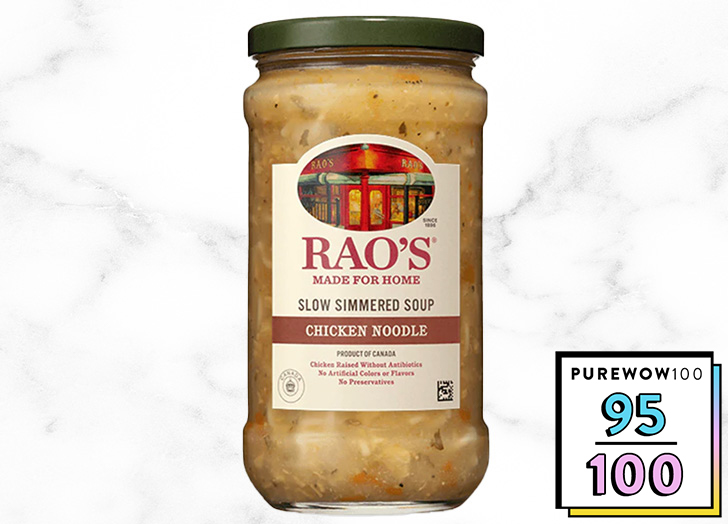 This brand is beloved for its tomato sauce, but we’d argue their chicken noodle soup rivals it in deliciousness. Made with antibiotic-free chicken and without artificial colors, flavors and preservatives, the soup tastes like even your Nonna would be impressed. Garlic, extra-virgin olive oil, Italian seasonings and Parmesan cheese in the mix make the broth savory, flavorful and unlike its competitors in the best way.

Our one critique is that most of the chicken was sort of shredded throughout the soup instead of in large pieces, although the texture was just right in the best way. We’d say it also strikes the ideal soup-to-stuff ratio, meaning you’ll get pieces of veggies, pasta and chicken in every bite, along with a dose of cheesy, impeccably seasoned broth. Rao’s is a bit pricier than others on this list (it’s about identical to Whole Foods’ and Pacific’s soups, but contains one less serving, according to the label), but once you taste it, you’ll see it’s well worth the extra cents. 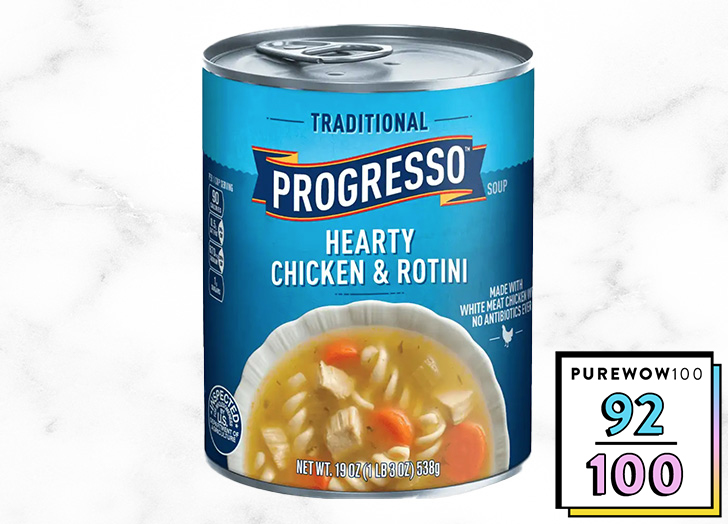 Loaded with white meat chicken, garlic powder and egg yolk for thickening, Progresso’s offering is as cozy as it is satisfying. It was a little brothier than we’d hoped (though it’s silky and pleasantly fatty), but the texture was pretty solid. The large, vibrant pieces of carrot are tender but not mushy, while the chicken is bountiful and in sizable chunks. The real star is the rotini though; the tight, curled noodles stay fairly firm, offering a more toothsome bite than looser egg noodles. Another perk? Progresso is a big brand, so it’s one of the most affordable picks on our list. 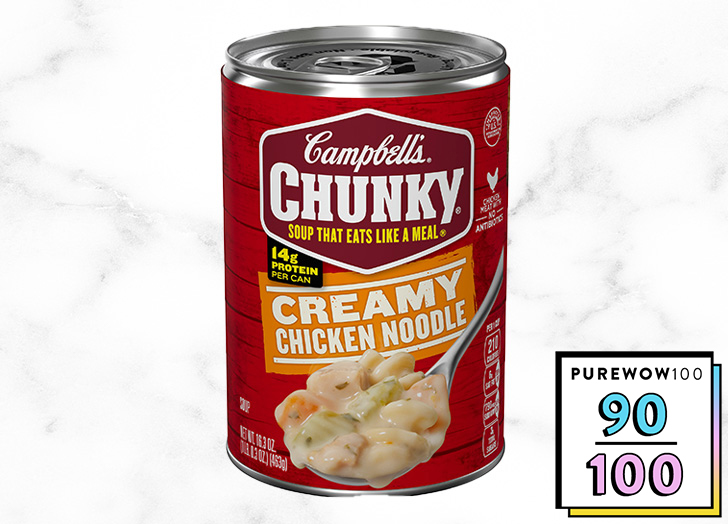 This soul-soothing soup from Campbell’s is just the antidote for a long, exhausting day. It’s made with an extra thick broth that’s doubly comforting, thanks to a dash of cream. The soup—loaded with carrots, chicken, celery and egg noodles—boasts 15 grams of protein per can (although that’s technically two servings). The broth texture is just as creamy as you’d hope, sort of like a chowder. We appreciated the rustic size of the noodles and vegetables but felt there could have been more chicken. 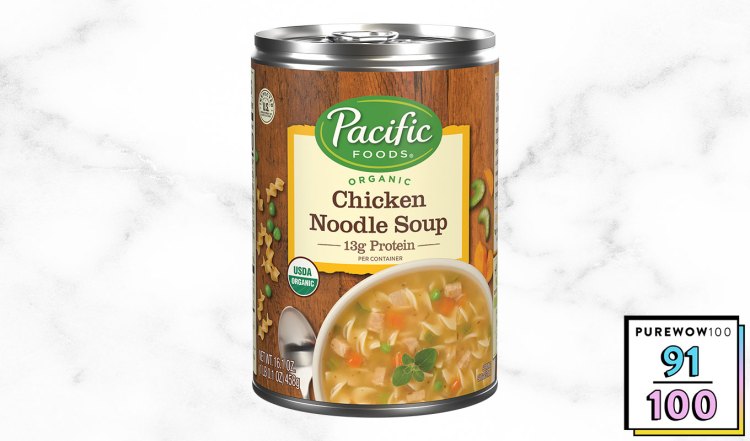 Organic chicken, produce and egg noodles come together in a savory broth that’s classically spiced and soothing. In other words, if you had a bad day and are craving something from Mom’s magic kitchen, Pacific’s offering should hold you over. Our main complaint is that we wish the chicken pieces were bigger and less uniform, but the noodles are wholesome and tender without being mushy. We also feel like the unique addition of green peas not only offers another textural element, but it also makes the soup feel homier. 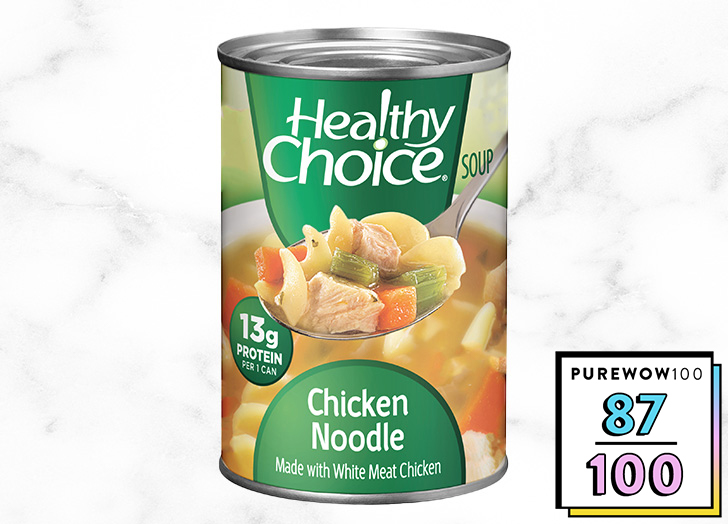 Some other soups on our list may be slightly lower in calories per serving than Healthy Choice’s offering, but this one is significantly lower in sodium than them all. It’s also low in fat and boasts solid amounts of protein and potassium (7 grams and 15 percent of your daily recommended, respectively), along with 1 gram of fiber per serving. Our main issue is that it’s mostly broth; while the vegetables are decently sized and the noodles have a nice texture, there simply isn’t enough of either, if you ask us. As for the chicken, there were only a few sizeable chunks, and a lot of it was sort of shredded in tiny pieces. 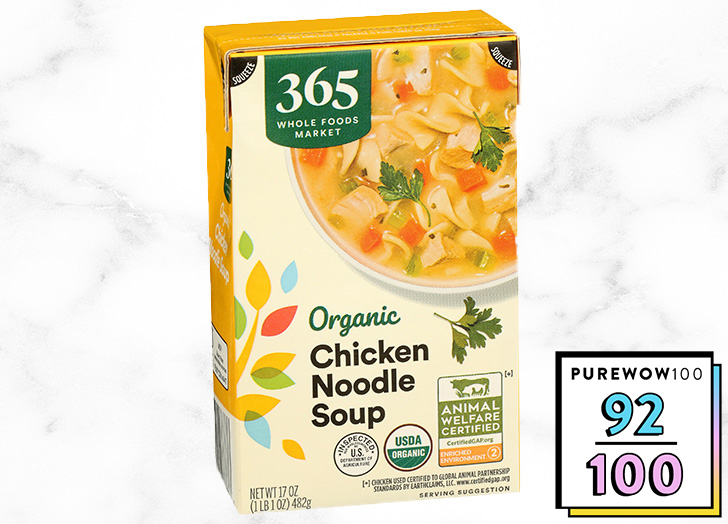 Ingredients don’t get much simpler than Whole Foods’ chicken noodle soup. We’re talking water, organic carrots and celery, organic egg noodles, organic chicken meat and stock and a slew of organic seasonings, like turmeric, onion powder, garlic powder and white pepper. The broth is well seasoned and savory, so it's guaranteed to satisfy your chicken noodle soup craving. The only downside? We thought there was way too much broth, and we wish that there were more significant pieces of chicken throughout (though the texture of both the noodles and the meat was enjoyable). 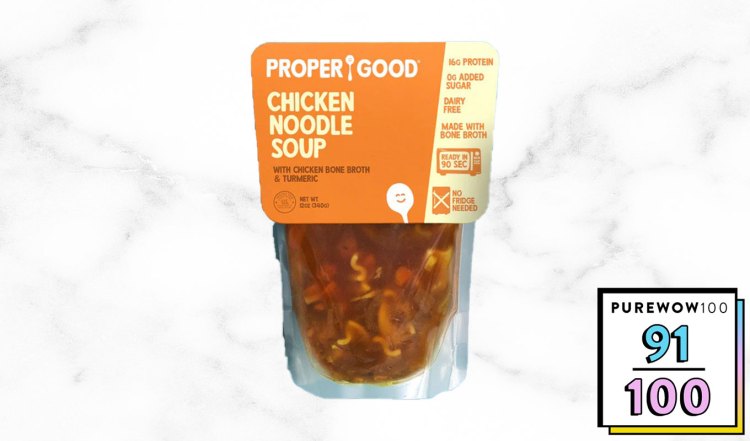 Thanks to an organic chicken bone broth base and white meat chicken breast, this soup is rich in protein (16 grams per serving) and collagen alike. Turmeric and ginger give the broth a uniquely warm flavor and fragrant aroma, while egg noodles, carrots and onion keep it classic. The texture of the pasta and veggies is just right, but the chicken was a tad dry and sparse. Shelf-stable and ready in 90 seconds, the soup is part of Proper Good's subscription program. Build a six- or 12-pack of soups, overnight oats, chilis and more to be sent straight to your doorstep. 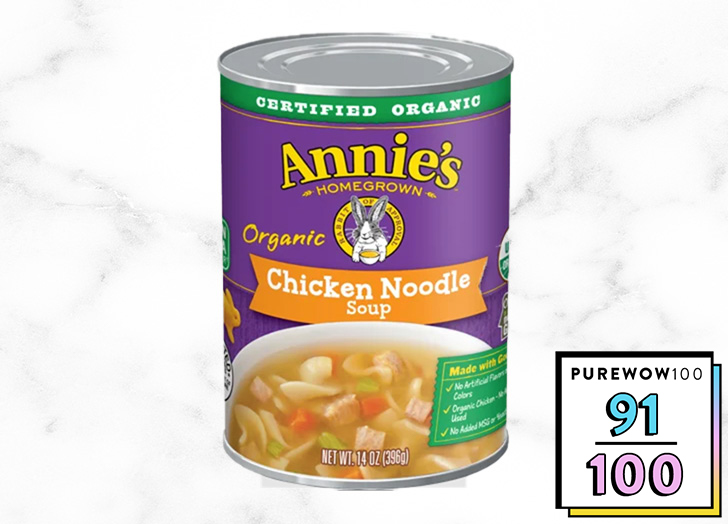 When it comes to store-bought soup for the kids, lean on this beloved bunny-bearing brand. Each can is packed with lots of soft pasta (aka your picky eater’s favorite part) and easy-to-chew, bite-size pieces of chicken. The broth and meat were a tad on the bland side, but that’s part of what makes it such a safe bet for little ones. We’ll also note that it’s a bit more expensive than other organic options on this list, despite not being the tastiest of them all. Nevertheless, it’ll be an easy home run with your fam if you’re pressed for time. Tell them they can have Bunny Grahams for dessert if they clean their bowls. 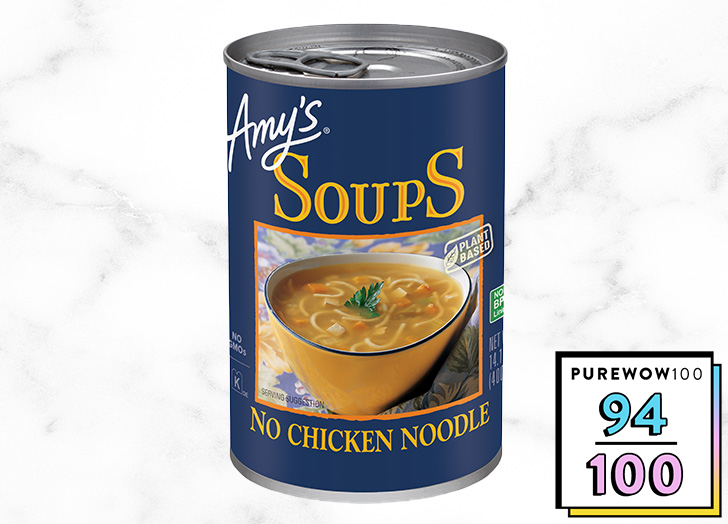 Organic? Check. Plant-based? Check. Loaded with semolina noodles, quality produce and satiating tofu? You bet. Amy’s is a stellar alternative for those seeking the comfort of chicken noodle soup minus the meat. And thanks to soy, each can contains 9 grams of satisfying protein. The broth is pleasantly oniony and the ratio of diced carrots, celery and leeks is spot on. The noodles were less al dente than we'd like, but the tofu pieces act as a chewy, toothsome foil. It’s also pretty darn affordable, given the ingredients, at 23 cents per ounce. 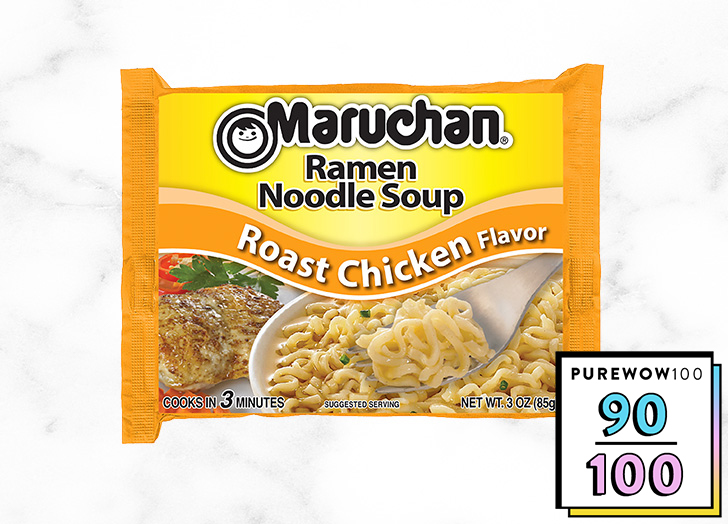 You won’t find any chicken or vegetable pieces here, but the ramen still delivers plenty of savory flavor, courtesy of a seasoning packet made with MSG, chicken fat, dehydrated soy sauce, dehydrated vegetables, powdered cooked chicken and spices. It’s a little fussier to prepare, since you’ll ideally need to use the stove to cook it (although we managed to prep plenty of ramen noodles in the microwave in our college days), but we love that they’re easy to zhuzh up with vegetables, hot sauce, tofu or fresh chicken. When cooked according to package instructions, the noodles are long, hearty and toothsome, but if you’re all about chunky soup with lots of stuff in it, you’ll want to supplement add-ins of your choice. 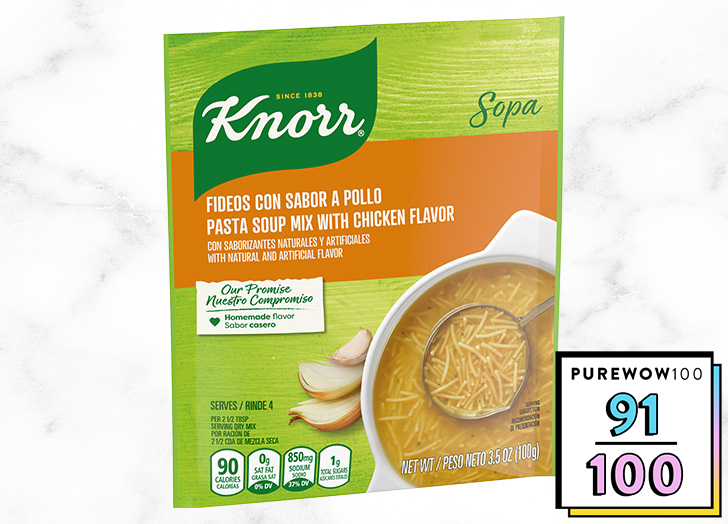 Instant soups are great to have on hand for last-minute meals, especially if you’re feeding a crowd. (Canned soups usually contain up to two servings, while powdered soups typically make between four and six servings per packet.) Our go-to is Knorr’s chicken-flavored soup mix. The pasta is toasted, which offers the broth a dose of warm, unexpected earthiness and nuttiness. Onion powder, egg and powdered cooked chicken in the seasoning mix deliver cozy, savory flavor without the help of vegetables or chicken pieces. Despite this pick not having as much “stuff” as other options on our list, the noodles are plentiful and make this pick a great choice for pasta lovers (and lazy cooks). 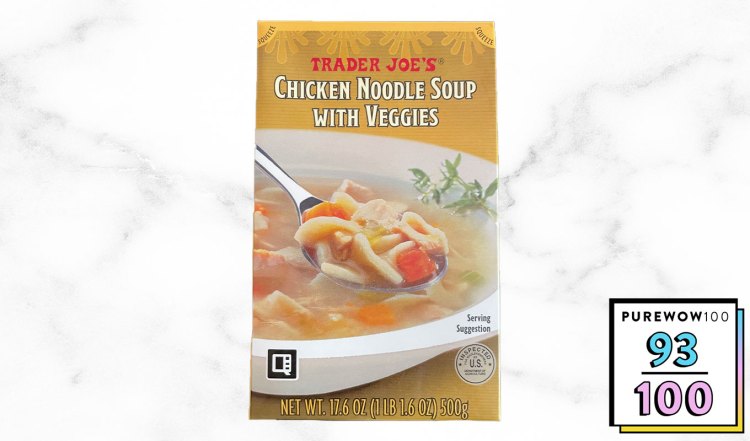 Often, when you're shopping for a supermarket bargain, you get what you pay for. That's not so with this shelf-stable pick from TJ's. It's almost as cheap as the most affordable pick on our list, but you wouldn't know it from the taste or ingredients. While the flavor is a bit bland (we'd add a dash of salt, personally), the soup-to-stuff ratio is ideal, and the texture is pretty solid too. But we wish the chicken pieces were bigger and more plentiful. 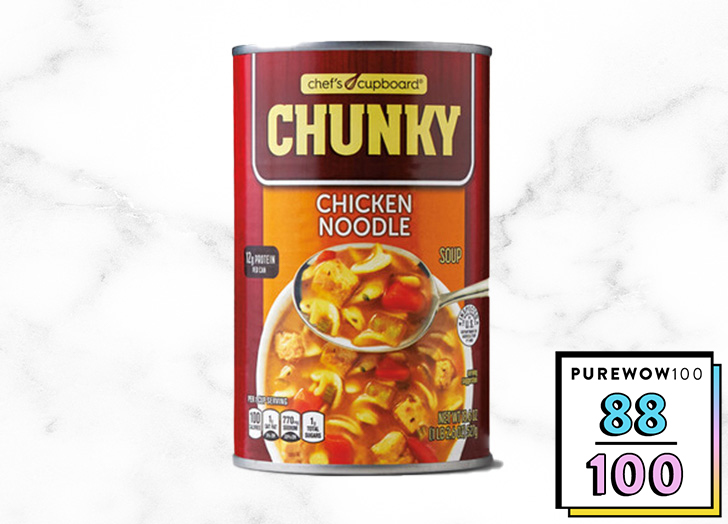 This soup from ALDI costs about 9 cents per ounce, or about 84 cents per serving. Does it get cheaper than that? We think not. At 15 grams of protein per can plus 2 grams of fiber, it’s sure to keep you full until dinnertime (or dessert). It’s packed with large egg noodles, decent-sized chunks of chicken and pieces of carrot and celery that we wish were a tad bigger. As for the flavor, the broth has unexpected nuance but something about the taste of the chicken sort of put us off. But if you’re looking for a bargain, this one can’t be topped.

We Taste-Tested 18 of the Best Hot Dog Brands. The Results, from ‘Meh’ to ‘Seconds, Please’