When she's not transfixing us with her performances, Zendaya loves to captivate us with her outfits, and her Paris Fashion Week attire was no exception.

The Euphoria star attended the Valentino Womenswear Spring/Summer 2023 show, where she sat front row and wowed everyone in a sheer catsuit from the host brand. The look, styled by the 26-year-old's frequent stylist, Law Roach, was part Catwoman, part Britney Spears’s “Toxic” music video.

Zendaya showed off the ensemble on Instagram, where she posted a pair of photos from the event and captioned it, “The Valentino girl.”

In the photos, snapped by Tomás Herold, we can see that the Spider-Man: No Way Home star is sporting a see-through bodysuit that's adorned with Maison Valentino's signature “V.” Underneath, the actress donned a pair of black booty shorts, and she also wore metallic silver stilettos and dangly black earrings. To round it out, Zendaya sported a black blazer that was stitched with the same design as the catsuit.

The Emmy Award winner tagged Valentino's creative director, Pierpaolo Piccioli, as well as her makeup artist, Sheika Daley (who used Lancôme products on the superstar). Zendaya also tagged hairstylist Taije Simon, who provided her with that slicked-back 'do. 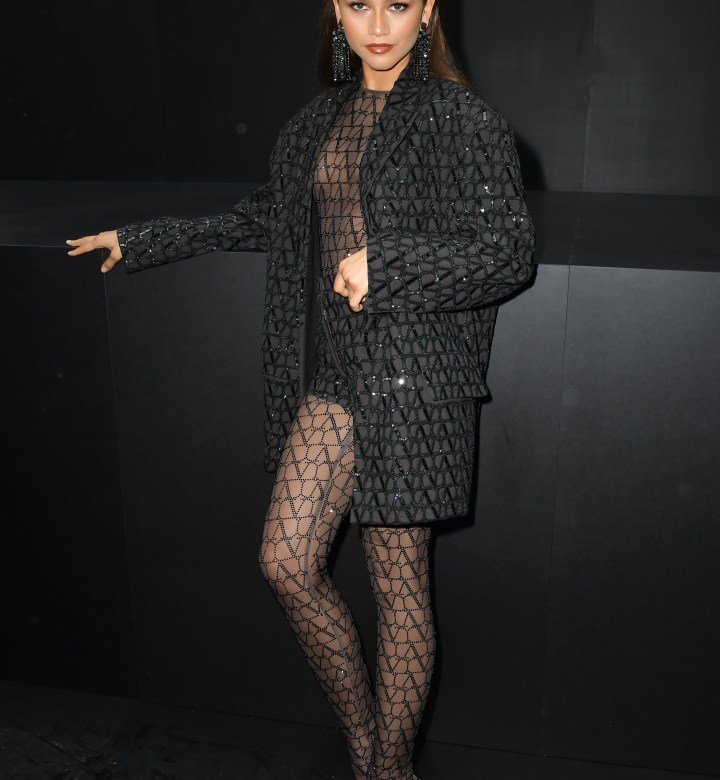 Fellow celebs were obsessed with the outfit, like singer Moses Sumney, who commented, “Stunning.” Meanwhile, designer Harris Reed (who's outfitted some of our other favorite stars, like Beyoncé and Lil Nas X), called her an “ICON.” Kerry Washington added, “SHEESH,” and West Side Story lead Rachel Zegler said, “Gorg!!!!!”

It turns out Zendaya's show-stopping look was actually part of the new Valentino collection, which was noted on the label's official Instagram. They posted a video of the actress and wrote, “@zendaya - the #ValentinoDiVas and face of the Maison - attended the #UnboxingValentino show this week in an outfit from the collection. Her full Toile Iconographe look, which would later be unveiled on the runway, was styled by @luxurylaw with #VALENTINOGARAVANI heels and jewelry.”

The Greatest Showman star is a frequent wearer of Valentino, and she has been spotted in the brand on a number of important occasions.

Take for instance, last month's Emmy Awards, where Zendaya absolutely glowed in a chic black gown from the Italian luxury fashion house. Not only did she look fab, but Zendaya ended up taking home her second award for Outstanding Lead Actress in a Drama Series (making history as the youngest recipient to ever do so).

Could she be any more glamorous?

Stay up-to-date on all the latest celebrity fashion stories by subscribing here.