By Katherine Gillen
Average (0)
Salty, savory and tangy, this pasta is ready for fall. 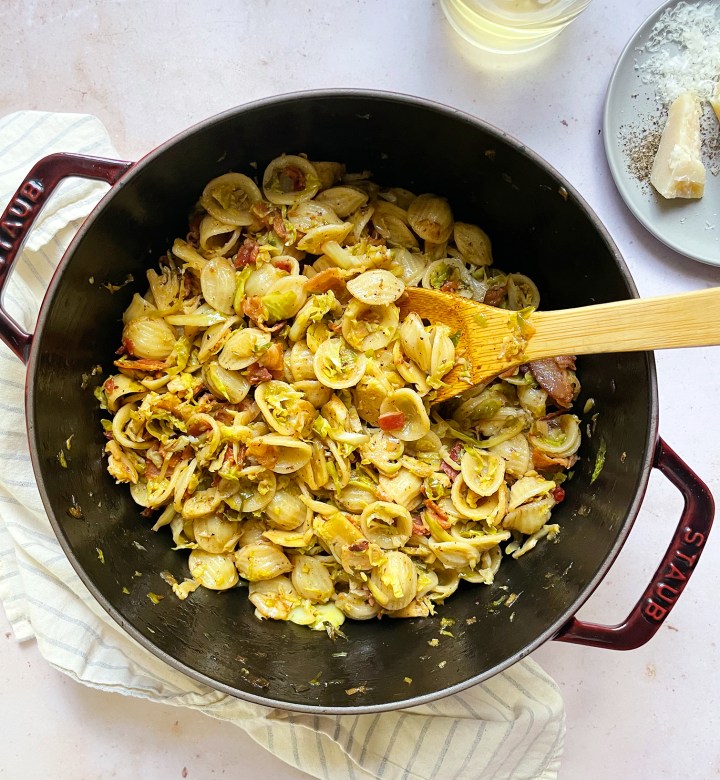 The minute we sense so much as a whisper of crispness in the air, we go into fall mode. Out with the corn and tomatoes; in with the root vegetables and hardy greens. This recipe for Brussels sprouts and bacon orecchiette is first on our list of fall pastas to make. It’s salty from the bacon, savory from shallot, garlic and those sprouts, plus it has a bit of tang from a secret ingredient. (Spoiler: It’s apple cider vinegar.)

Oh, and did we mention it’s ready in 30 minutes?

1. In a large Dutch oven over medium-low heat, cook the bacon until crisp, 8 to 10 minutes. Using a slotted spoon, transfer to a paper-towel-lined plate and set aside.

2. Drain all but 2 tablespoons of the bacon fat from the Dutch oven and return to medium heat. Add the shallot and onion, and cook until soft and aromatic, about 5 minutes. Season with salt and pepper.

3. Add the Brussels sprouts and cook until soft and beginning to caramelized, 5 to 7 minutes. Deglaze the pot with the vinegar, stirring up any brown bits from the bottom. Return the bacon to the pot.

4. Meanwhile, bring a large pot of generously salted water to a boil. Cook the pasta until al dente or according to the package directions. Reserve about 1 cup of pasta water before draining.

5. Add the pasta to the Dutch oven and about ¼ cup of the reserved pasta water, stirring and adding pasta water as needed until a glossy sauce forms. Stir in the butter. Taste and adjust the seasoning as desired. Serve with lots of grated Parmesan.