Katy Perry has taken her VMAs "red carpet look" to a whole new level. And no, we're not talking about glam makeup or a stunning new hairstyle. We're talking maternity wear and breast pumps.

Just five days after the new mom welcomed her daughter, Daisy Dove Bloom, she shared the most relatable post-birth selfie on her Instagram Story, making sure to credit the inspiration for her look. 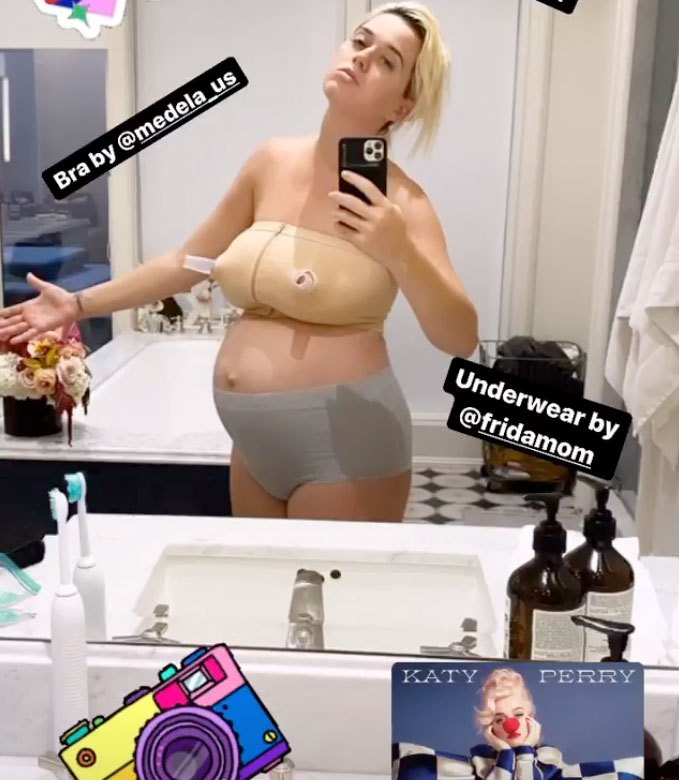 Like every mom right after they've given birth, the "Roar" singer, 35, is seen without makeup and with disheveled hair as she snaps a photo in her bathroom mirror. She also sports a nursing bra and maternity underwear, including the captions, "Hair and makeup by: @exhaustion," "Underwear by @Fridamom" and "Bra by @medela_us."

In honor of the awards show, Perry also added a VMAs sticker and camera gif, making sure to play a snippet of her new song, "Not The End of The World."

The singer released her latest album Smile on August 28, just two days after she welcomed her daughter with her fiancé, Orlando Bloom. The parents, who are both Goodwill Ambassadors for UNICEF, announced her arrival through the organization's Instagram account. They shared a sweet photo of Daisy Dove's hand and said, "We are floating with love and wonder from the safe and healthy arrival of our daughter. ﻿But we know we’re the lucky ones and not everyone can have a birthing experience as peaceful as ours was.”

In an effort to help expecting mothers get access to healthcare, the couple encouraged their fans to make donations to the charity. They added, "In celebration of the heart we know our daughter already has, we have set up a donation page to celebrate DDB’s arrival. By supporting them, you are supporting a safe start to life and reimagining a healthier world for every child. We hope your [heart] can bloom with generosity."