Some people say vanilla is boring…but we say it’s understated and underrated. (Chic.) To prove our point, we did what any sane person would and set out to find the absolute best vanilla ice cream on the market. (It’s a tough job but someone has to do it.) After painstakingly tasting a dozen pints, we’re relieved to say we not only made it out alive but also landed on the following ranking.

Aside from being relatively easy to find in stores nationwide (or available for shipping online), we based our rankings on the following factors:

On a side note, we were also sent a sample of Ripple’s Vanilla Plant Based Frozen Dessert, which we didn’t include in our ranking since it’s dairy-free (but yeah, we tasted it—more on that soon). We wanted to include Ben & Jerry’s vanilla ice cream but were unable to find a pint even after searching in three different stores. 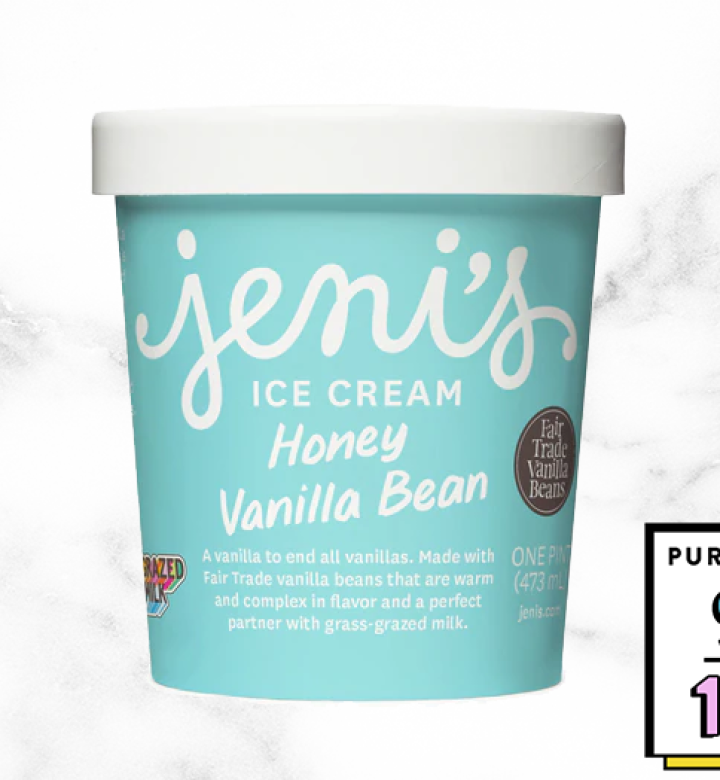 Let’s just say that given the chance, we would order a scoop of this vanilla ice cream and never look back. It has a noticeable (but not overpowering) vanilla flavor, notes of honey and a hint of salt to keep it from being cloying. The ingredient list is short and recognizable, the vanilla is fair trade, and since it contains no eggs, it’s creamy without being overly rich or eggy. While it’s definitely on the pricier side, it’s worth the splurge. This vanilla is as interesting as any specialty flavor with five bajillion mix-ins. 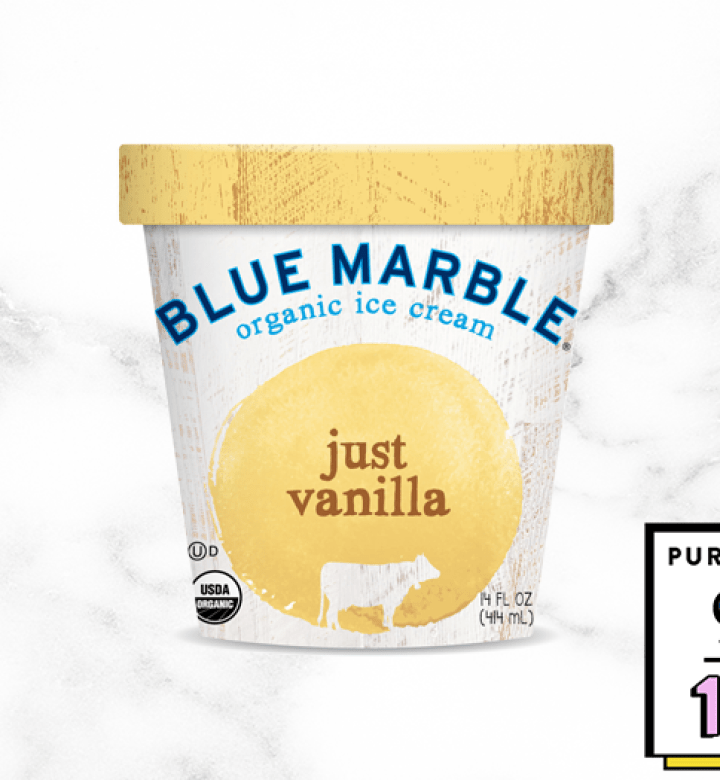 Blue Marble’s Just Vanilla pint contains a mere six ingredients, and they’re all organic. Luckily, the flavor and texture are just as high quality. We found this ice cream to have a creamy, classic vanilla flavor—not too floral, but not bland either. It tasted fancy enough to serve at a dinner party alongside a plate of chocolate chip cookies or even on its own; just be prepared to spill your secret when everyone asks for the brand. 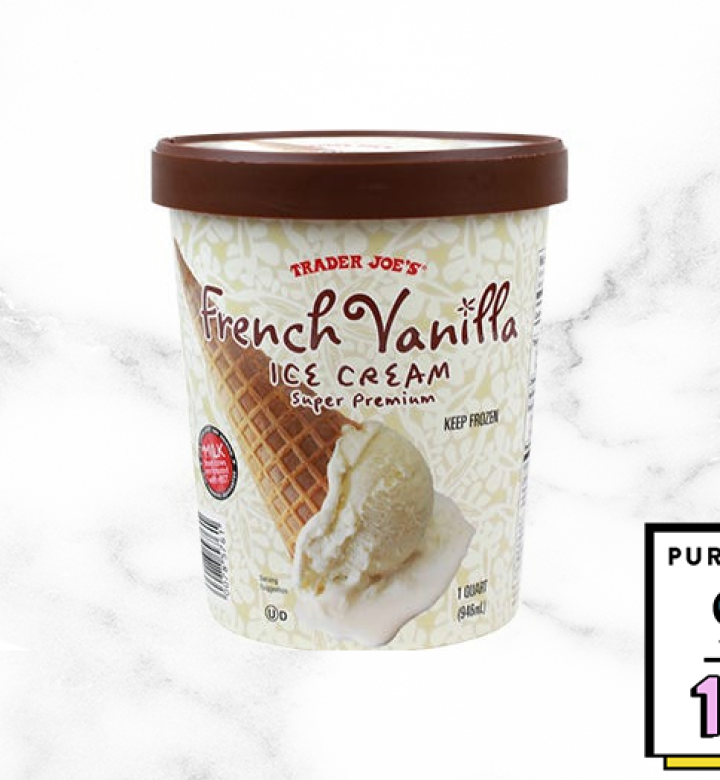 Our grocery store boyfriend almost never lets us down, so we weren’t too surprised to fall for this super premium ice cream. Its ingredient list is short, it has a smooth, creamy texture and a nice vanilla flavor that’s anything but plain. Oh, and it costs about $4 for a quart at our neighborhood TJ’s. How’s that for a steal? If you don’t live close to a Trader Joe’s, don’t sweat it…but if you do, it’s worth going out of your way for. 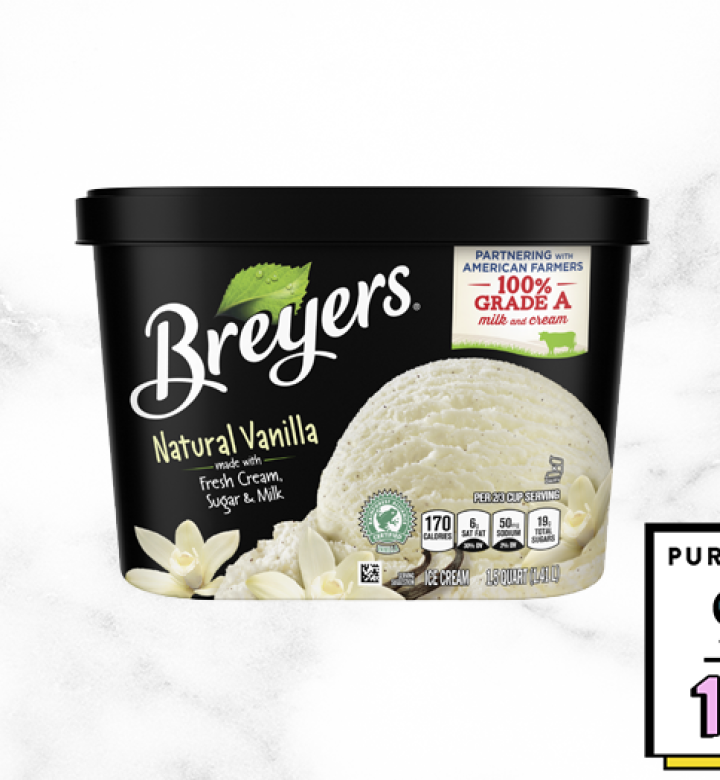 If our childhood memory served us right, Breyer’s would be kind of meh and better served as an afterthought alongside a giant piece of blueberry pie. But happily, we were incorrect. While the texture is much fluffier than a super-premium ice cream (that’s thanks to a lower fat content), the flavor was clean, pure vanilla. And considering a quart costs about $4, you get a whole lot of bang for your buck. We’d still prefer pairing this with another dessert before eating it on its own, but it’s not like we’d say *no* to a scoop or two. 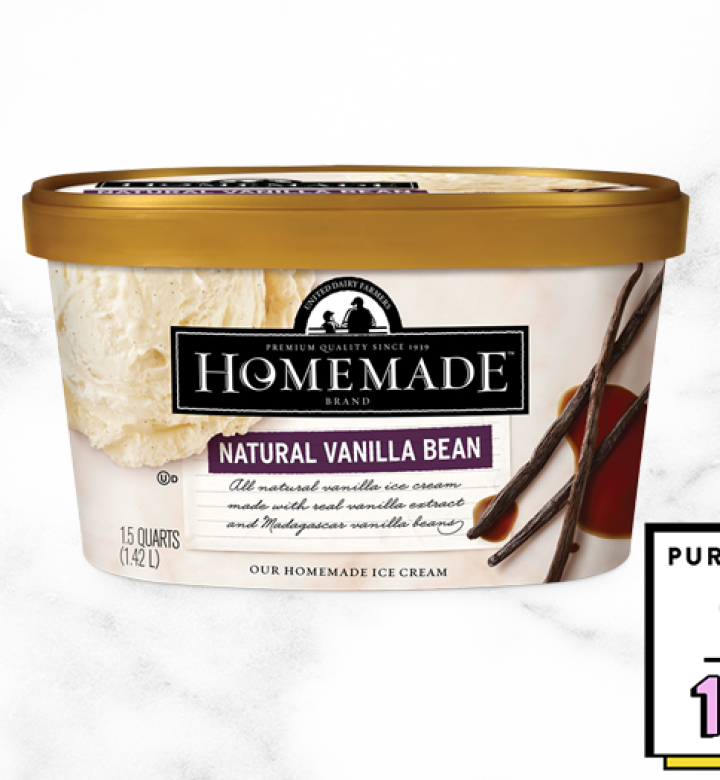 When we peeled back the lid on this quart, we were greeted by the sight of vanilla bean flecks—a good sign. The texture of Homemade Brand is a good balance between airy and dense, so it’s not too rich to serve à la mode but not chintzy either. The milky flavor almost reminds us of a sweet cream ice cream more than pure vanilla, but it’s pleasingly sweet and doesn’t taste artificial. (Psst: You’ll find this one easily in the Midwest.) 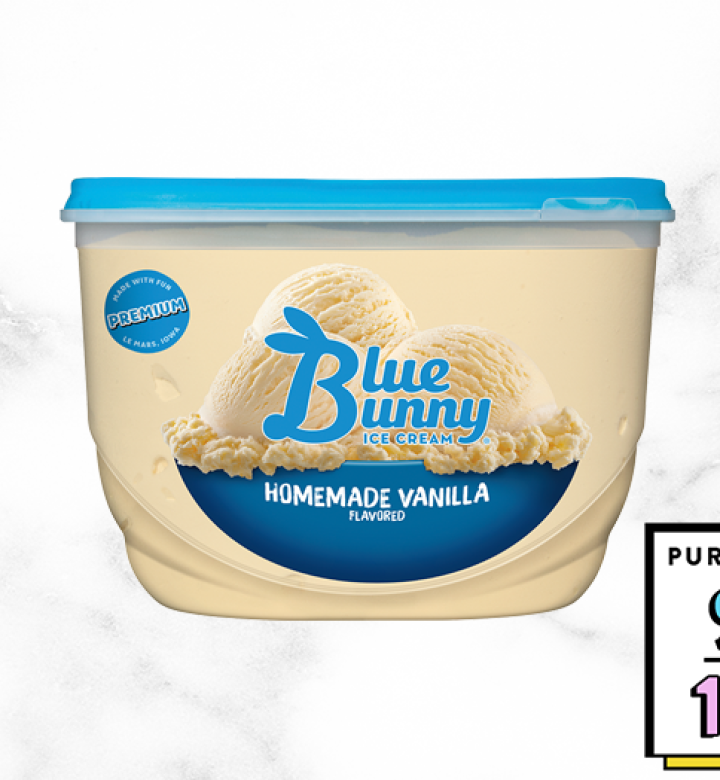 On first taste, Blue Bunny’s regular vanilla (they also have a vanilla bean flavor) is creamy but not too heavy, with a lot of vanilla flavor that tastes pretty authentic. It scoops very easily and has no iciness, a major plus. For the low price, we would buy a quart of this without any qualms (and we think it would make a mean root beer float), but we wouldn’t choose it over Breyer’s, which we thought tasted more classically vanilla-y. 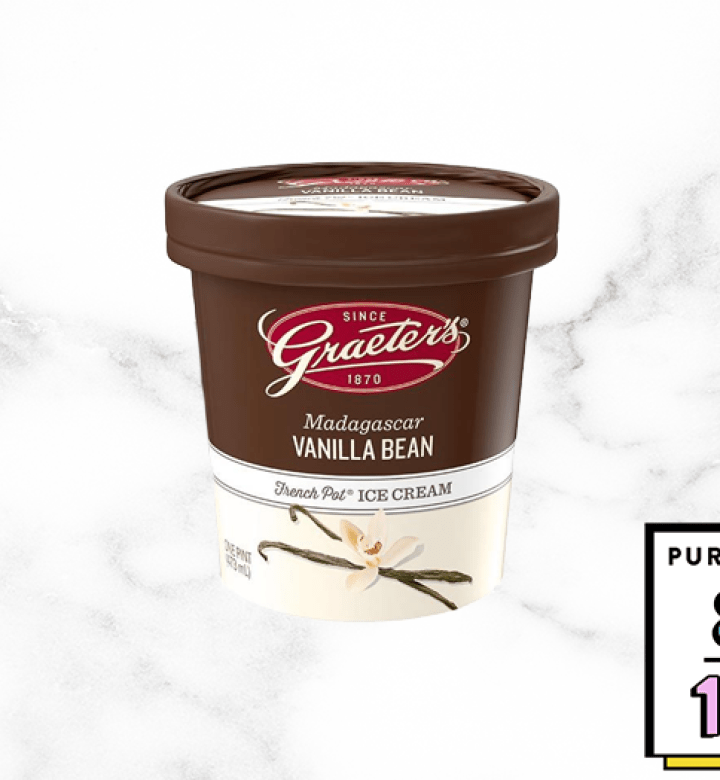 Some vanilla ice cream tastes sweet and nostalgic…like birthday cake or marshmallows. This vanilla ice cream, on the other hand, is totally grown up. It’s the most floral pint we tasted, and while that’s not necessarily a bad thing (it makes sense, since vanilla comes from orchid flowers), it’s not the ice cream we would grab unless we felt ~fancy~. The texture is exceptionally dense and creamy, but we would seek out other flavors of this brand—which, BTW, is stocked at Whole Foods—before choosing vanilla. And by that we mean black raspberry chocolate chip. 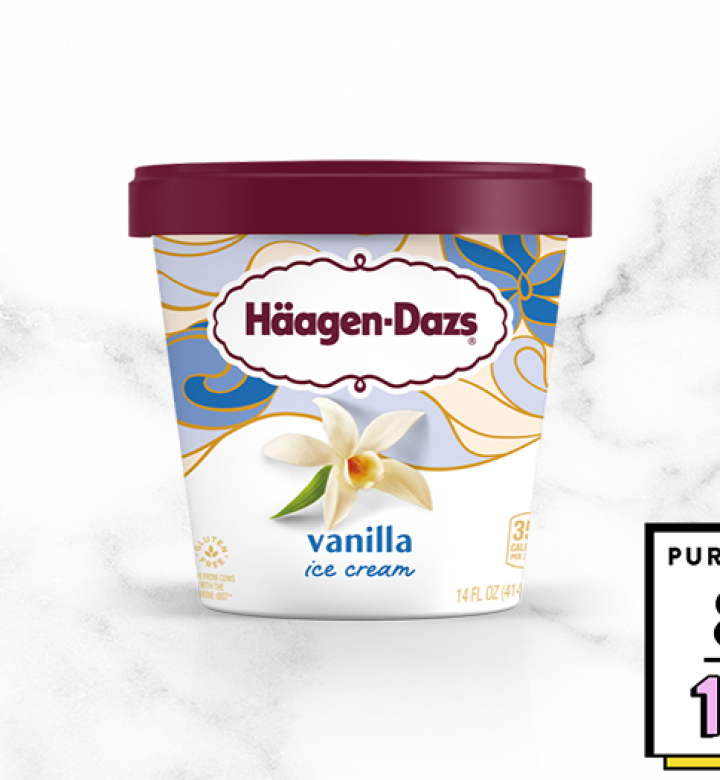 The Ina Garten Approved One

Listen, we know Ina Garten fills her six chest-freezers exclusively with Häagen-Dazs vanilla. And while it’s certainly creamy and luxurious, we just didn’t get enough vanilla vibes to give it the same endorsement. The flavor is eggy—like a custard—rather than milky, which does wonders for texture but obscures the vanilla flavor we want. But then again, would we turn it down? No. 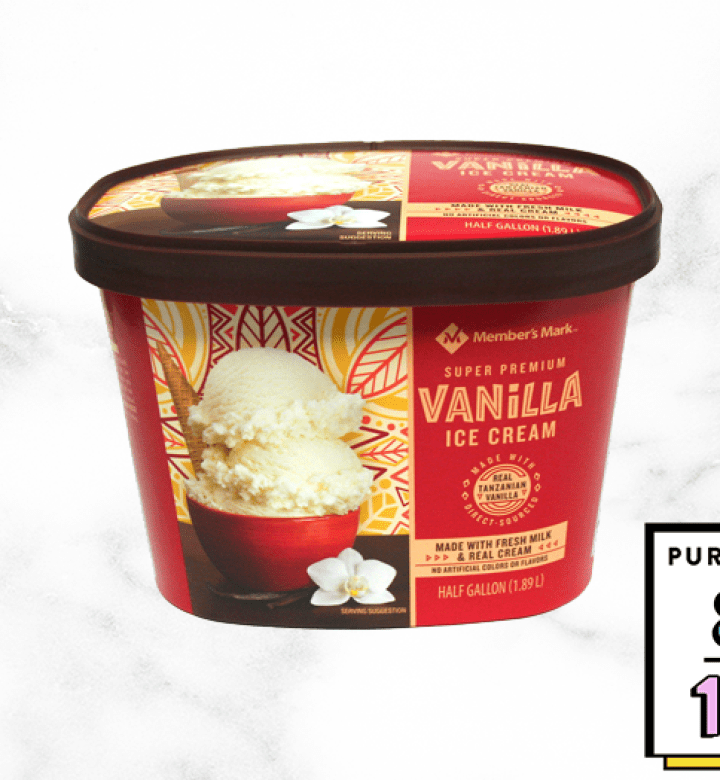 Without even scooping into this pint, we had a feeling it would be the richest ice cream we tasted. It’s a creamy yellow color with a smooth texture and no sign of ice crystals. When we dipped in, we were impressed by the custardy texture and extremely buttery texture, but not so much by the presence of vanilla. If you’re looking for frozen custard instead of ice cream, Member’s Mark is a solid choice, but it was more egg-flavored than we were hoping for. 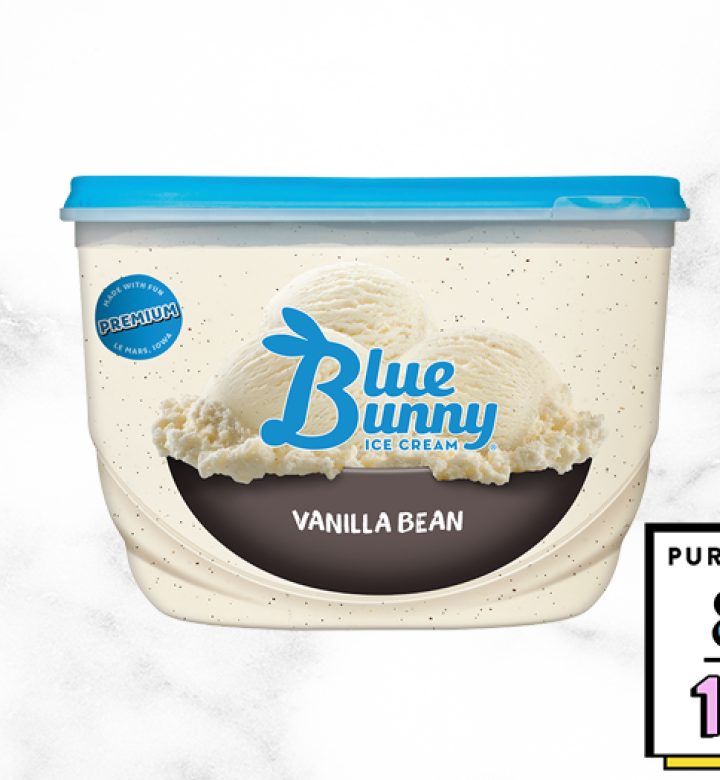 Best for Kids and Crowds

We preferred the recognizable ingredient list of this vanilla bean to Blue Bunny’s regular vanilla ice cream (which comes with a few stabilizers), but the taste was way too eggy to edge out the competition, and the texture wasn’t quite as creamy. We’d be fine serving this to a gaggle of kids at a birthday party, or for a backyard get-together. 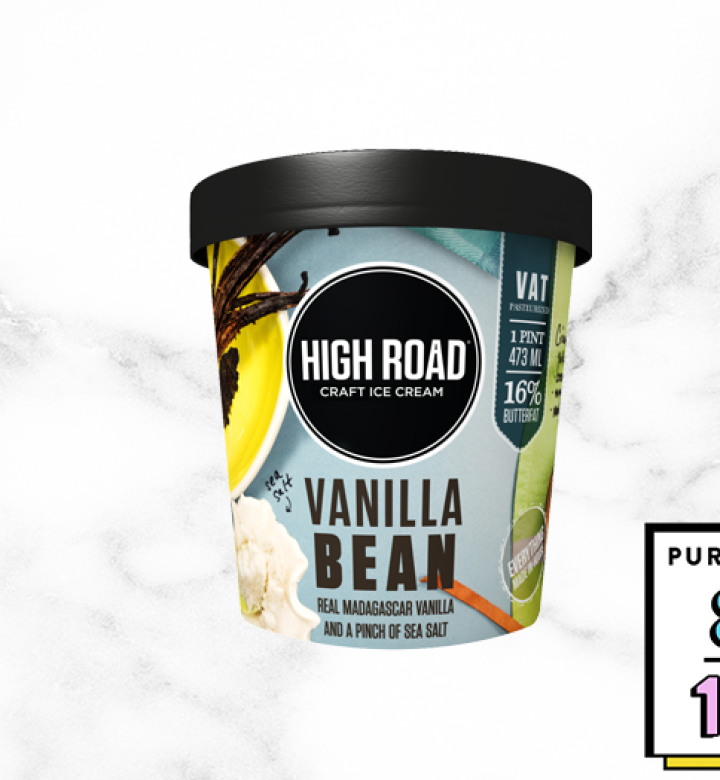 A theme among the premium ice creams we tasted? The more eggs, the creamier and denser the scoop. Unfortunately for High Road, that meant less vanilla flavor than we expected from a top shelf brand. The texture was luxurious, and the flavor was certainly rich, but not as clean as we want in a vanilla ice cream. 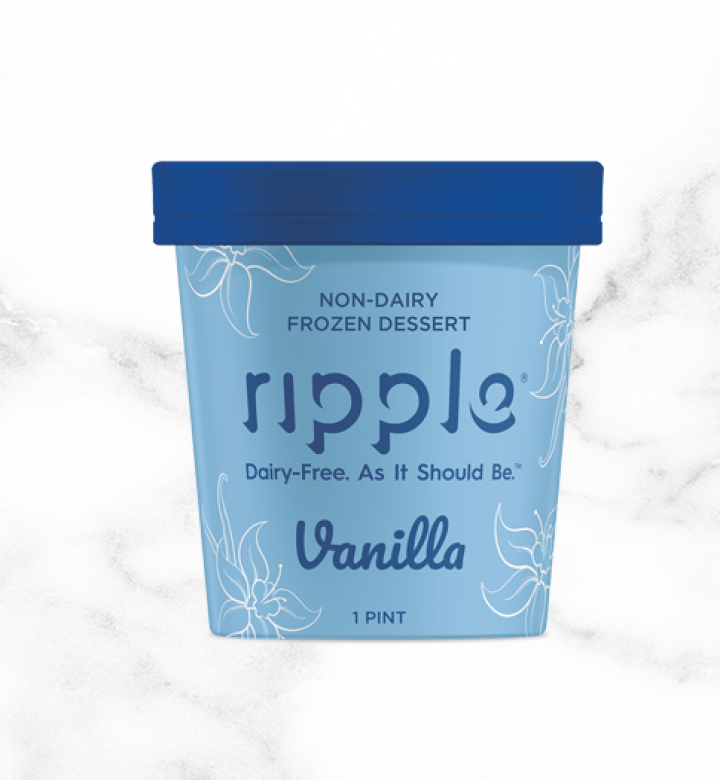 We couldn’t fairly include Ripple—a plant-based brand—in our ranking. (It’s in a category of its own…and it’s pretty hard to compare pea-protein-based ice cream to actually dairy.) But that didn’t mean we couldn’t taste it…and we were pleasantly surprised. While the texture wasn’t as creamy or melt-in-your-mouth as a regular ice cream, the vanilla flavor was really good. If you’re vegan or don’t eat dairy, this is a plant-based option that doesn’t disappoint.

How to Make 3-Ingredient Cookies and Cream Ice Cream

This article reflects prices and availability at publication that may change﻿ or vary by location.