It's no secret that Prince Harry and his wife, Meghan Markle, are quite close to royal cousins, Princesses Beatrice and Eugenie. In fact, it seems like the York sisters are the relatives that the Sussexes have remained closest with since stepping back from the royal family and moving to the United States.

But Harry's bond with his cousins is hardly anything new. In a rare throwback video, we see that Prince Harry and Princess Beatrice have been tight since the latter was still in diapers.

In a rare throwback video posted by fan account @thelooksroyal on Instagram, the pair can be seen having a playful squabble. Baby Beatrice, while in the hands of mom, Sarah Ferguson, tries to swipe at her big cousin's head. Harry attempts to playfully retaliate before Princess Diana intervenes.

The little tiff barely lasts though as moments later, Prince Harry is seen joyfully dancing with the then 2-year-old princess as the marching band drums on. Though the moment is super cute, it looks like it wasn't exactly in line with royal protocol as Princess Diana once again steps in to steady the party of two. 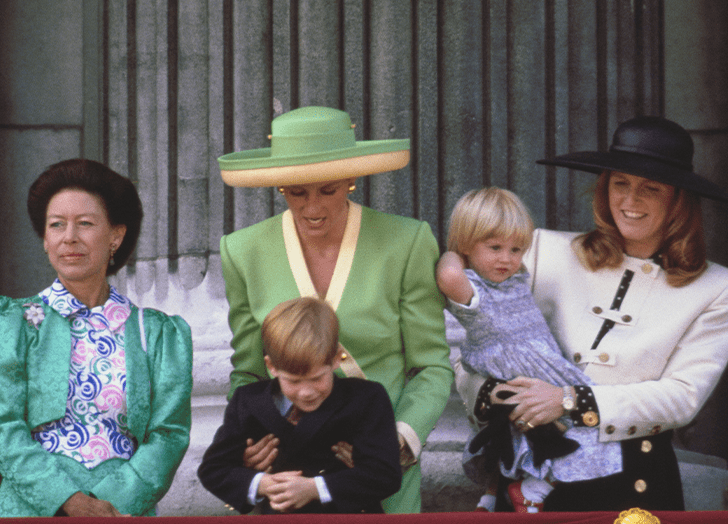 The adorable video was captured while members of the royal family were commemorating the 50th anniversary of the Battle of Britain in 1990. Also in attendance on the Buckingham Palace balcony was of course, Queen Elizabeth, as well as Princess Margaret, Prince Edward and his wife Katharine, Duchess of Kent.

Fast forward 20+ years, and we wonder if these two get down on the dance floor at secret royal bashes. We wouldn’t be surprised if they did!