The Star-Stuffed ‘Don’t Look Up’ Is Bleak and Topical, But Also Falls Somewhat Short

Right now, so many of us are looking for lightness and escapism in our entertainment. It makes sense that Schitt's Creek swept the 2020 Emmys and Ted Lasso did the same this past September. When the pandemic struck, life felt so bleak that the last thing viewers wanted was to see the tough aspects of their lives reflected on screen.

For this reason, the new movie Don't Look Up can be a difficult watch, because it often hits too close to home. However, this seems to be the intention.

The star-studded movie—which includes A-listers like Leonardo DiCaprio, Meryl Streep, Jennifer Lawrence and more—follows the story of two astronomers (DiCaprio and Lawrence) who discover that a comet is flying toward Earth and will wipe out the planet. As these scientists scramble to get their government (and the world) to respond, the results are often frustrating and nerve-wracking.

﻿Don't Look Up﻿—which drops in theaters today and hits Netflix on December 24— is not merely a doomsday flick. The movie is overflowing with themes and social commentary. But while many of these ideas pack a punch, the film, in many ways, also feels limited. 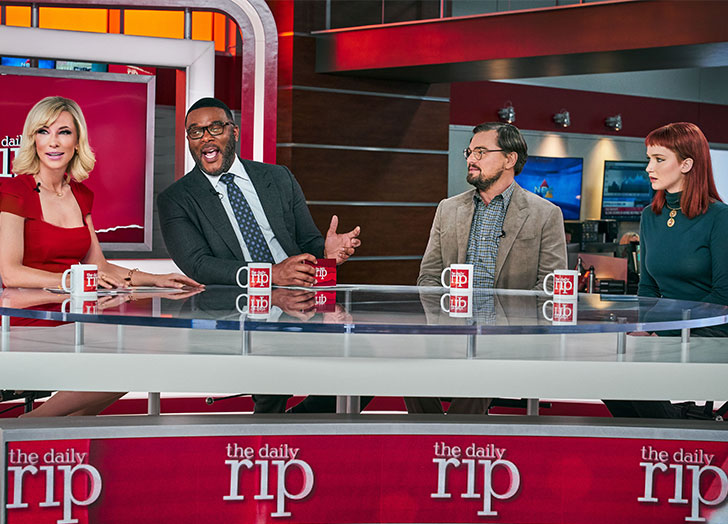 The director, producer and screenwriter of the film, Adam McKay (The Big Short, Step Brothers), holds nothing back in his lacerating script. The movie digs into consumerism, capitalism, sexism, racism, the media and more at almost a breakneck speed. As Lawrence and DiCaprio try to save the world, they're met with underhanded politicians, image-obsessed talk show hosts and volatile civilians.

Sometimes, it feels as if McKay is giving an all-too-obvious wink (think Jessica Walter in Arrested Development) with his social commentary. Although the movie centers on a comet, it's clear the director is trying to allude to climate change. But when government officials care more about their image and making money than they do the safety of the people, we see obvious parallels to works like Veep, which have similarly (and more expertly) dissected the political world.

However, there is also nuance to McKay’s writing. Lawrence's character could be considered the center of the film, and her arc is particularly compelling. Because she is the one who discovered the life-altering comet, the asteroid is ultimately named after her. However, her public persona is damaged after she loses control during a television appearance because no one is heeding their warning. Soon, she is labeled as “emotional” and “crazy” and her distraught expression is transformed into a meme. This moment is all too real as we've seen many women treated the same way within the world of politics, entertainment and science.

In many ways, Don't Look Up ﻿is a criticism of the media (and social media), highlighting how the press picks and chooses what they cover. In two different instances, Lawrence and DiCaprio each argue that the news of the comet cannot be sugarcoated. McKay seems to be making a meta commentary with this repeated message. While some elements of the film are delivered with comedy, in the end, viewers are left feeling uneasy. McKay is scared for the future of our planet and he’s not going to hide it. 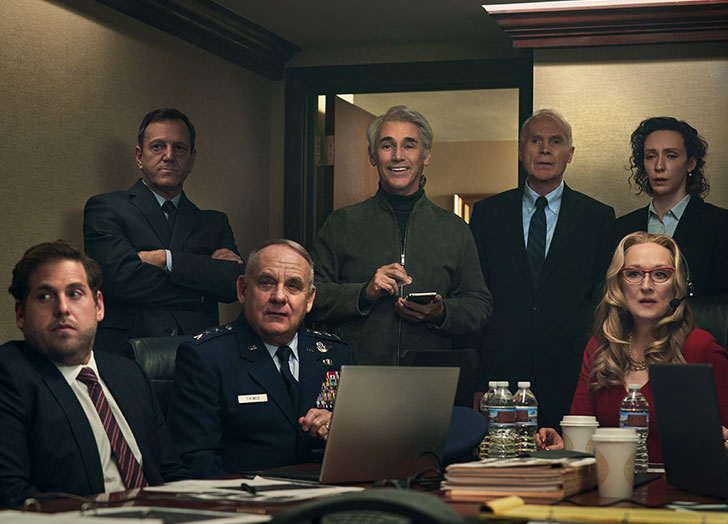 Meryl Streep has a terrific turn as the flippant, chain-smoking President of the United States and Jonah Hill is equally comical as her rotten, doting son. And in a refreshing move, the political affiliation of this family is never revealed. However, the President's followers who “don't look up” and debate whether there even is a comet are depicted as rednecks. This tired stereotyping of one group of people in the U.S. fails to acknowledge the fact that it’s never just one demographic that challenges science. McKay could have depicted this divide (especially in our current vaccine age) in a better way.

Meanwhile, with so many stars included (we haven’t even mentioned Cate Blanchett, Rob Morgan, Timotheé Chalamet or Tyler Perry), it is hard for many of these terrific actors (in devoted performances) to really have room to shine, or for their characters to be fully developed.

In the end, ﻿Don't Look Up ﻿has some important messages to relay, and it sticks with you long after the closing minutes. But often, its bevy of stars (and ideas) are not given enough attention because there is so much going on at one time. We have to respect what director McKay is trying to do here, and hope that stories like this lead to less corporate greed and more thoughtfulness and unity in our society. But after watching Don't Look Up, it leaves viewers with the feeling that the road to a better future is almost impossible.