Your Look Inside 'The Zone: Britney Spears' Pop-Up (Rated on a Scale of 1 to 5 Pythons)

A new Britney Spears interactive exhibit called The Zone: Britney Spears just popped up on West Third Street. It’s like a Britney Spears museum, really, with 30,000 square feet of elaborate rooms riffing on the themes of several of her videos in roughly chronological order (from 1998’s seminal smash “...Baby One More Time” through 2007’s paparazzi-skewering “Piece of Me”). Since the whole shebang is located in an out-of-business Kmart painted Pepto-Bismol pink, next to a discount Dress Barn—and because Spears has lately been the subject of street protests decrying her father’s conservatorship over her business affairs—we weren’t expecting a lot. And we weren’t expecting it to be worth the pretty steep admission price of $65 a head for the approximately 75-minute walk-through.

But hey, it’s Britney, bitch. This experience was done “with her blessing,” according to co-creator Jeff Delson, who said the project involved two years of planning and three months of building. Spears herself is endorsing the project in Instagram posts sandwiched between her delightfully wackadoo videos of bikini yoga workouts, so if it’s good enough for Brit, you better believe we were going to check it out. Here’s what you can expect from the experience, rated from one to five pythons. 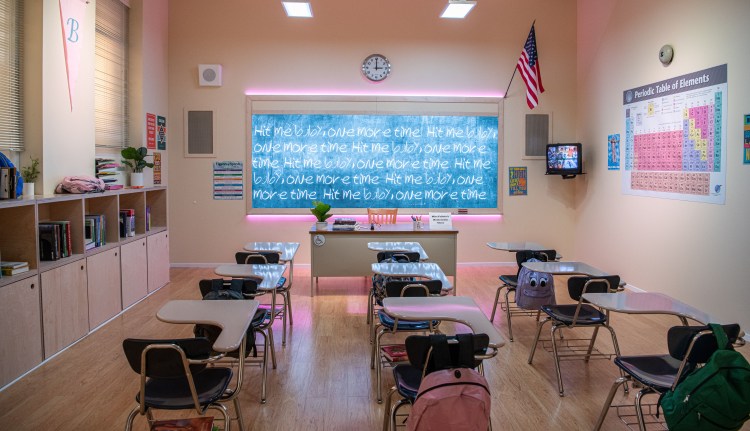 1. The Britney Museum Has All The Tech

As soon as you walk in, you’re led into the classroom from “...Baby One More Time,” which has 15 desks—meaning only 14 other people will be in your group, preventing the experience from being too crowded to enjoy. An actor dressed up like the teacher from the video tells us we’ll be encouraged to dance, take photos and use our RFID (radio-frequency identification) bracelets to scan monitors at six checkpoints throughout the exhibit, which will send photos taken of you sent to an app you have downloaded on your phone. Honestly, though, I had a hard time paying attention to the speech, because I kept giggling and bopping my head to the baseline of Britney’s ode to teen sexuality/lechery. 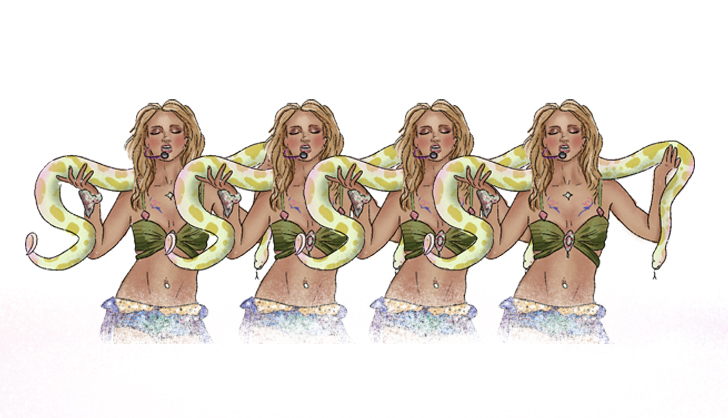 Props to the pink neon and American flag, but nah to the inspirational quote poster from Henry Ford. 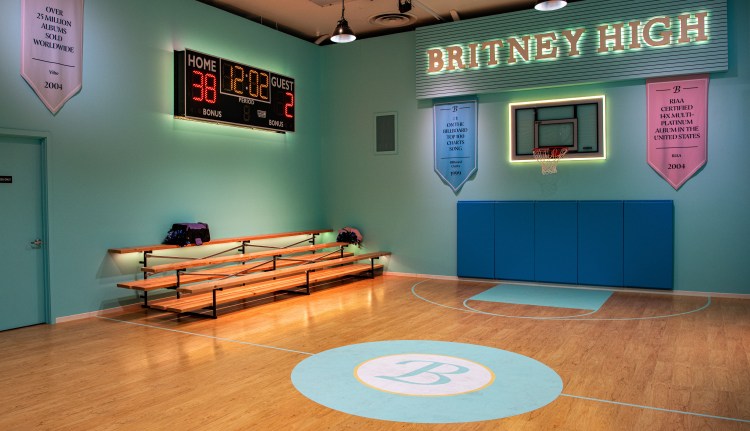 2. You Can Reach Out To Brit-brit

The exhibit’s next room: the gymnasium! I am still bopping and grinning, borne aloft on some sort of cocktail of pop music and nostalgia, when I face a row of lockers with pads of stationery emblazoned with our star’s name and instructions to “1. Write Britney a Note. 2. Find Britney’s Locker. 3. Insert Your Note.” I asked a staffer if Spears would actually see these notes, but she didn’t know. Then I decided that maybe just the act of writing a note is, in some vision board kind of way, going to create the change I want to see in the world. Like, “Thanks for the lifetime of music, Britney, and I wish for a million dollars.”

I noticed pink basketballs stacked on a wall and moved to shoot a basket with one, but soon learned they were glued down. Still, there’s that pop song and a video feed. 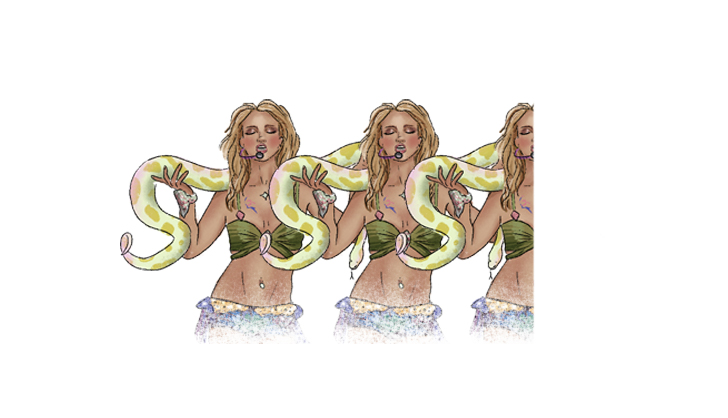 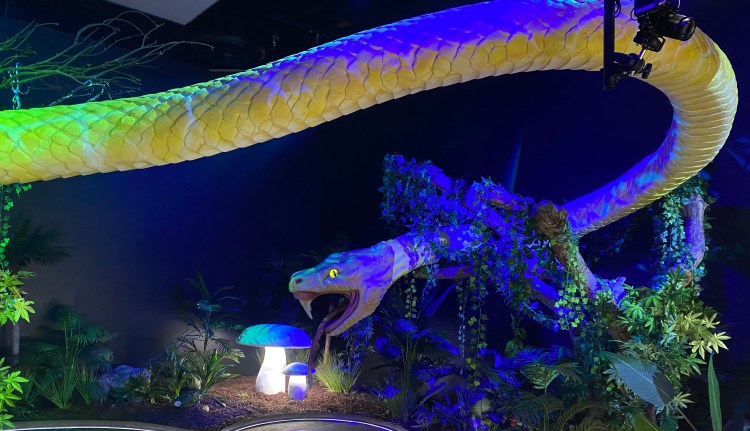 3. There Is So Much Posing Potential

Another room has a giant snake in a tropical jungle dotted with giant psychedelic mushrooms. It’s at about this time I’m glad that the Britney museum is open from 10 a.m. to 10 p.m. daily (except Tuesday), since this room is practically begging for some sort of edibles/ayahuasca/Bud Light Seltzer enhancement. As you might expect, “I’m a Slave 4 U” is played on a loop, and Spears’s VMAs performance, where she draped an albino Burmese python over her shoulders, is projected onto nifty smoke screens and makes you feel super inspired to dance and pose. And you can use your electronic wristband to take a photo of yourself draped in a pretty good-looking fake snake. 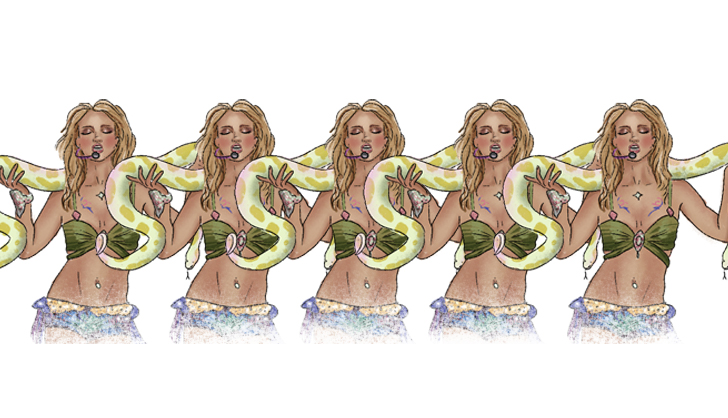 Britney, is that a snake in your museum or are you just glad to see me?

4. Did We Mention There’s Dancing?

Each area has enough room to dance, which is surprisingly difficult to resist doing with all the video feeds, piped-in music and props (a hat, cane and that big stuffed snake). Want to wow your social media feeds? Watch a few videos at home before you go, then totally let loose in Britneyland.

Almost perfect, but where is the on-site choreographer? 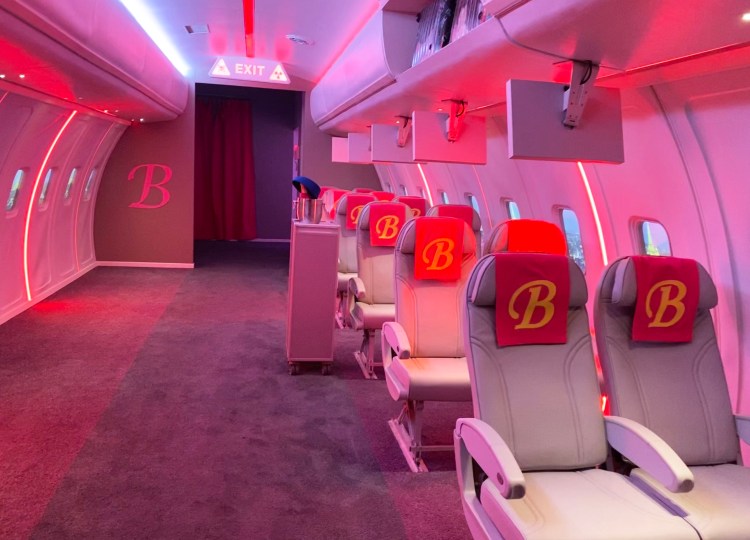 5. There Are Easter Eggs

The sets are surprisingly layered. The “Toxic” plane setup, for example, not only has the bar cart that our heroine pushes down the aisle in the video, but also features images of Las Vegas visible in the plane windows (the site of Spears’s years-long residency) and, on your way out, a pink wall phone rings randomly for a secret message. (OK, you got us: It’s Spears’s voice announcing, “It’s Britney, bitch.”)

You can wear the pillbox hat just like Stewardess Spears! But a point deduction because the bar cart is bolted to the floor, so there will be no Spears-style prancing down the aisle, my good man. 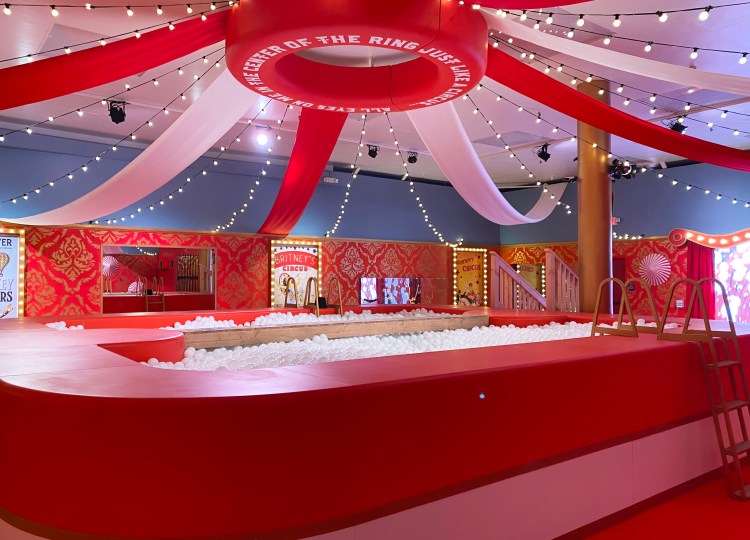 In the center of the room is a ball pit so massive, you had better not wear any loose items when you jump into it, because they will fall off and you will never find them. The ring-toss wall and Zoltar the Great fortune-telling machine are fun gateway drugs to work up the nerve to jump into the pit.

Props to the lion tamer’s cage stage set, beloved by your humble reporter and Busy Philipps. 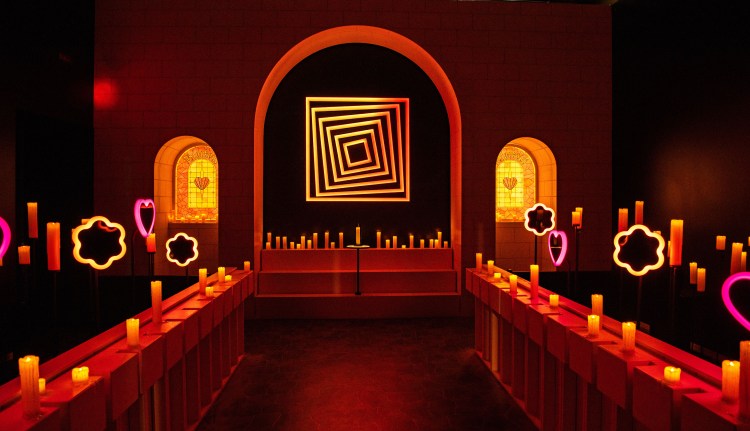 For her album Blackout, there is a darkened chapel lit by artificial candles and neon hearts. When you kneel on one of two padded footstools, stained-glass windows beam the most perfect light, like the Juno filter on Instagram. And the main candle on the altar? Make a wish and blow it out—the entire room is bathed in darkness.

Because the spiritual vibe inspires all the deep emotional feelings about this pop star's travails. Also, the stained-glass window filter is sooooo flattering. 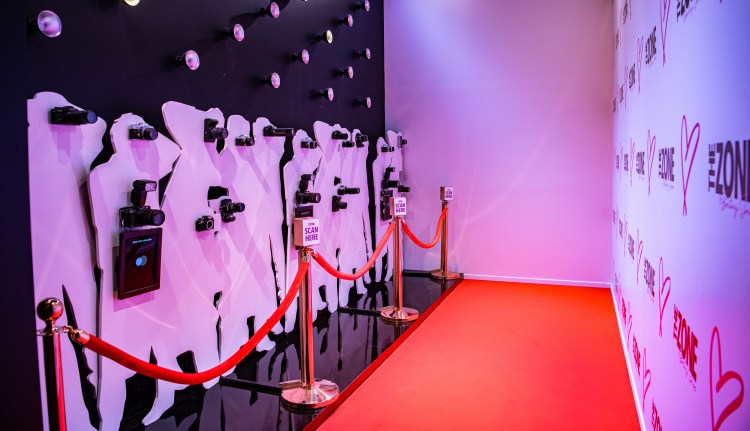 8. There’s Only A Hint Of The Troubled Years

Truth: When we first heard about a Britney Spears interactive exhibit, we wondered if there would be a head-shaving station or a wedding chapel where your nuptials would automatically expire after 55 hours. But this entire journey is a shade-free celebration, with no mention of orders of protection, lawsuits or divorce. However, in a nod to Spears’s “Piece of Me” electro hit song and video, there’s a Black Mirror–ish line of faceless photographers with camera lenses jutting out. You walk the red carpet just like Britney herself and they snap, snap, snap... 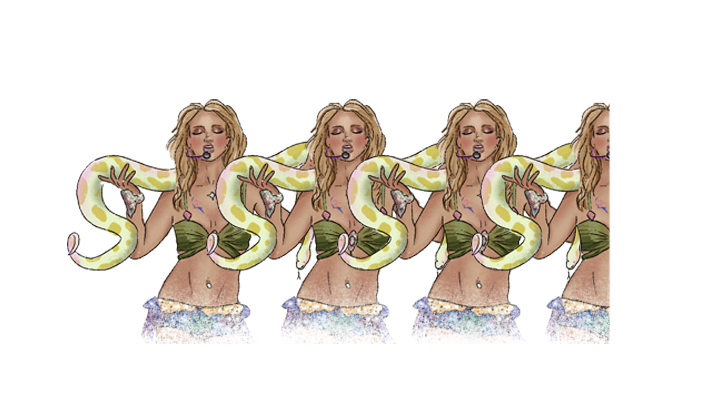 Photograher phalanx or firing squad? You be the judge. 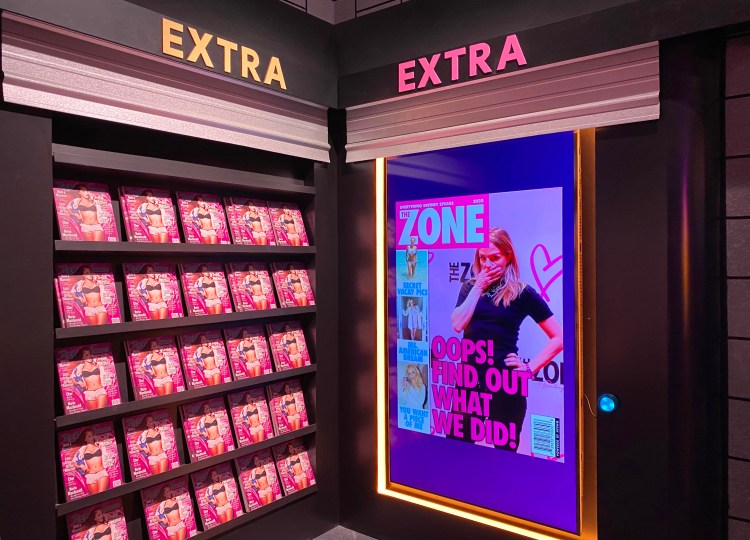 ...And all of a sudden, your image is plastered on a tabloid magazine cover, next to an entire newsstand of Britney covers. So meta, so social media ready.

Um, no one warned us we were going to be projected onto a five-foot-tall billboard. Ah, the pressures of being in the public eye. 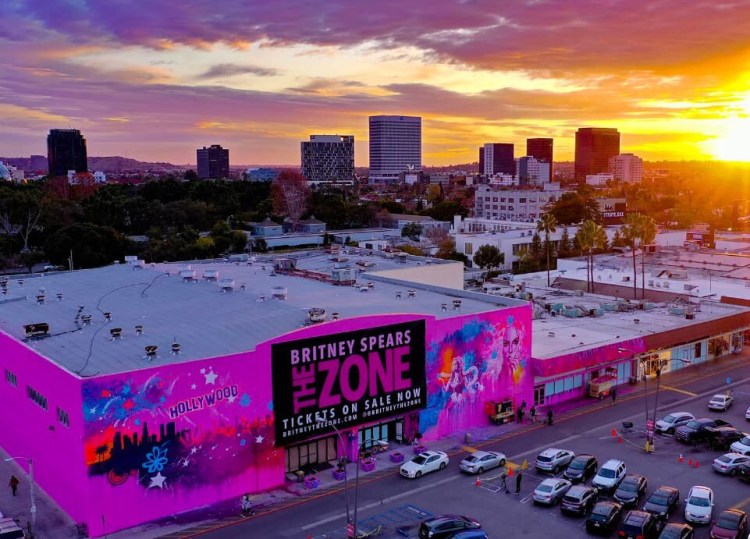 10. Make Time For The Merch

At the end of the tour, stans get access to a room of commemorative beach towels, notebooks and other Britney-emblazoned items available only to The Zone: Britney Spears survivors guests. However, the lobby of the building is filled with a Target juniors’ section worth of sweats, shirts and coin purses, anchored by vitrines filled with costumes worn by the Qween herself (including the flight attendant outfit from “Toxic”!). Presumably, the merch is where the organizers are making all their money, since the company is a self-described “retail merchandiser.” So...there’s a lot going on here, both music industry–wise and pop star fan worship–wise. All in all, criticizing this experience is too easy, since it’s obviously silly and sentimental. But hey, it’s also fun and a great excuse to dance and sing a little with a friend (and do bring a friend—preferably your Instagram husband—to take some righteous snaps).

We giggled, we shimmied, we conquered our usual defense of snark and had fun. (We’re coming for you in 20 years, Billie Eilish!)