If you came of age in the ’90s or early 2000s, then you likely remember Blockbuster, the mega video rental chain that offered customers the opportunity to rent DVDs, VHS tapes and video games for a cheap price, long before on-demand rentals and streaming services were available right at our fingertips.

And if you do recall these stores, then you probably also remember that visiting Blockbuster was an experience. To this day, it's easy to picture the stark blue and yellow walls, the aisles of endless titles and the candy right by the checkout that made you feel like you were at the theater. This memory is especially nostalgic because Blockbuster doesn't exist anymore—well, except for its one remaining location in Bend, Oregon. And this last remaining store (and the feeling of nostalgia) is where Netflix's new fictional workplace comedy series, Blockbuster, lives.

Blockbuster follows a group of employees as they try to keep this last establishment alive (and keep their jobs in the process). Of course, with Netflix producing the series, there is an obvious sense of irony, and the show succeeds thanks to its tongue-in-cheek sensibilities, as well as its winning cast. Keep reading for our full review.

When the show kicks off, we see store manager Timmy Yoon (Randall Park) being told that his Blockbuster is the last one in business, and we soon discover that Timmy has loved the store (and worked there) since he was a teenager, so he feels a duty to protect it. Thus, the first episode sees him try to host a fundraiser, but of course, hijinks ensue, like one might expect in other workplace comedies, such as The Office or Abbott Elementary.

In addition to Park, Blockbuster features a roster of notable names. Brooklyn Nine-Nine's Melissa Fumero plays Eliza, a recently-divorced employee who has been a longtime crush of Timmy's. Crush actor Tyler Alvarez plays Carlos, who dreams of being a director and spends time goofing off with his friend, Hannah (played by Devil in Ohio star Madeleine Arthur). Then, we have the snarky, but whip-smart teenager, Kayla (Kamaia Fairburn), her father, Percy (J. B. Smoove) and the scene-stealing Connie (Olga Merediz).

Despite this impressive cast list, the first episode of Blockbuster is not always laugh-out-loud funny, but it does offer memorable one-liners and loads of pop culture references. Meanwhile, it also leans into its nostalgia and the concept is sweet, with the argument that our consumption of media should be a social experience, not one we experience by ourselves with our tiny individual screens. 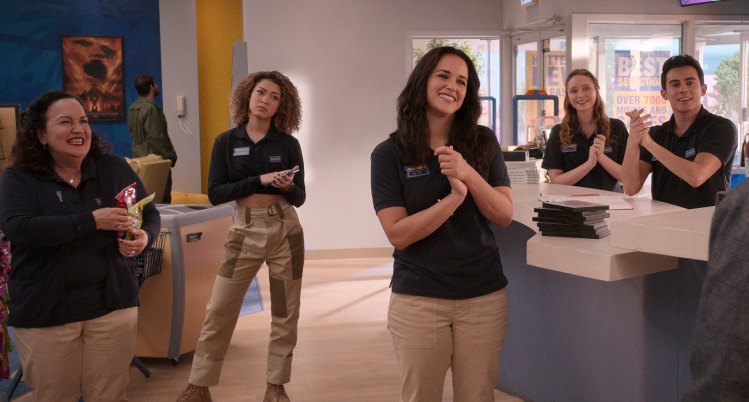 And although Blockbuster isn't necessarily gut-busting, it offers an intriguing set-up (and let's not forget that classic comedies like The Office and Parks and Recreation had averagely-reviewed first seasons before achieving critical acclaim).

Perhaps the most intriguing aspect of Blockbuster is its meta commentary. Due to the fact that the real-life Blockbuster lost steam due to the popularity of Netflix, the irony of the streaming service developing this show is obvious. Heck, they even make references to Netflix shows within the series.

It's especially interesting to see Netflix explore this narrative as they recently saw a downturn in subscribers alongside increased competition from other platforms. At one point in the first episode, Timmy even rallies the crew by saying that they must keep their rental store alive as a small business, to which Eliza comically points out that Blockbuster was once a huge corporation centered around movies that killed the success of indie films. With this moment, Netflix demonstrates that they know their success is precarious. 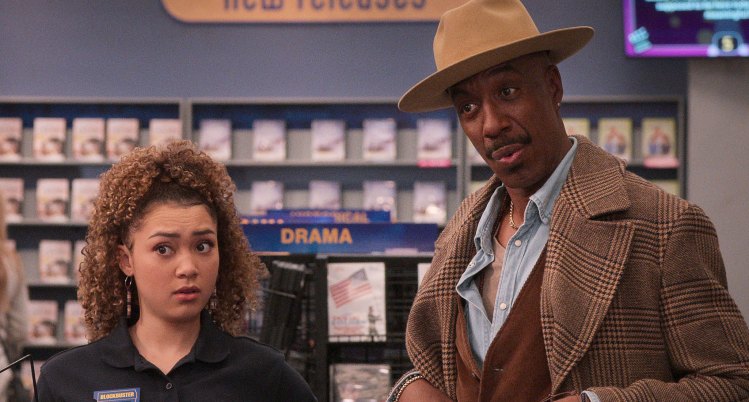 PureWow Rating: 3 out of 5 Stars

Blockbuster may not always be heavy on the laughs, but it boasts a strong cast and an intriguing setup, which gives us hope for future seasons. Meanwhile, viewers who remember the days of visiting Blockbuster rental stores will love the nostalgic aspect, and they will further appreciate the winking moments the show provides.