I Don’t Know Who Needs to Hear This, But Getting COVID Is Not a Moral Failing 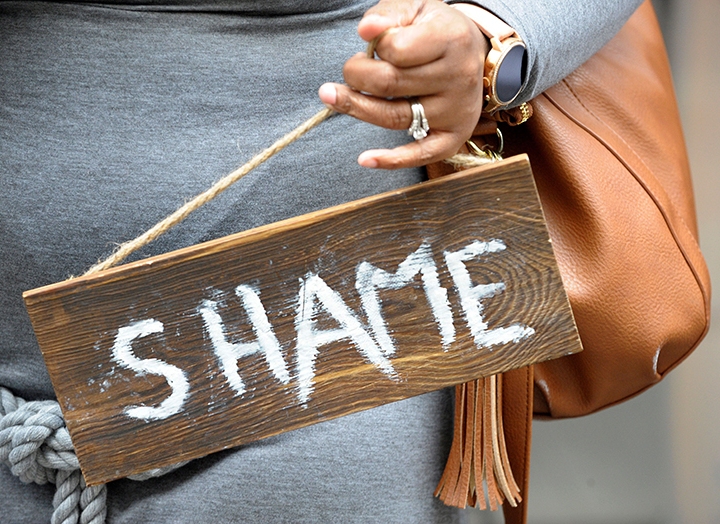 About a month ago, I was having a quiet night in when I got a text that’s all-too-familiar these days: A friend I had been with two days earlier tested positive for COVID. Neither she nor I had any symptoms, but I immediately got to work trying to schedule an appointment for a test (a nearly impossible task, I’ll add). As I did so, I was overcome with anxiety. Was I anxious that I would start feeling ill? No. I was anxious that if I did test positive, it would feel shameful. How will I tell the people I’ve seen since I was exposed? I should’ve known better than to go to that birthday brunch. The anxiety persisted for the next couple of days until both a rapid and PCR test came back negative. But the whole experience got me thinking: Why is it that, for many of us, testing positive at this point in the pandemic still feels like a moral failure?

After all, at the start of the pandemic, the messaging was clear: Stay home, do your part and you’ll save lives. The inverse of that, of course, is that if you go out, you’ll put lives in danger. (The logic was flawed, as many people literally had no choice but to go out and do their jobs, but that’s another story.)

I know this internal struggle first-hand, as I tested positive for COVID back in April 2020 (I guess you could say I was an early adopter). But in hindsight, I almost feel lucky that I got it so early on because at the time, there wasn’t this sense of “this is my fault,” “I haven’t done a good enough job” or even “I deserve this.” Pretty much everything was closed—save for the grocery store and pharmacy—and I wasn’t seeing anyone except for the three people I was quarantining with, making it easy to chalk it up to catching a highly contagious virus during a pandemic.

The component of shame seemed to arise as the world began to creep open (prematurely, many now agree) and lots of folks—myself included—began to judge others for their choices. Maybe we turned our noses up at the “wusses” eating indoors while we shivered over a plate of already-cold Bolognese beneath a barely working heater. Maybe we took to our group chats to lambast a mutual acquaintance for posting photos of her trip to Florida. Maybe we even felt smugly superior when we double-masked before venturing into CVS.

But this original messaging and subsequent morality-policing, while perhaps helpful at the start of the pandemic, stigmatized getting COVID to such an extreme extent that we haven’t been able to readjust as the situation evolves. Like 67 percent of all Americans ages 5 and up, I’ve received both doses of the vaccine. I got my booster shot as soon as I possibly could, I wear my KN95 masks constantly and I’m careful not to be in crowded spaces unmasked. And yet my biggest concern in my two days after exposure was other people judging me for being…careless.

Freelance writer Emma Singer, whose daughter tested positive three days into the 2021 school year, describes a similar sense of guilt. “The worst part of having my kid get COVID was the unanticipated and intense run-in with shame,” she writes. “See, as soon as it became apparent that no one in my family would become gravely ill from the virus, the social implications started to sink in. For starters, an entire first grade class had just shut down and gone remote after only two days of school—a crushing disappointment for kids and parents alike, plus a massive headache for the teacher and administrators. And it was our fault.”

Shehan Fisher, a psychologist and assistant professor of psychiatry and behavioral sciences at Northwestern University Feinberg School of Medicine, talked to Northwestern Now about how he helps those with breakthrough cases understand. “I try to ground them in reality to focus on the fact that they know they followed the recommendations and didn’t do anything reckless,” Fisher says. “The guilt isn’t a sign of a true mistake made, but an emotional experience based on social pressure. I try to help them accept they can’t control how others think…I try to encourage people to be kind to others because all of us are at risk, and all of us could make some choice that allows us to contract COVID, even if we engage in a conservative approach.”

All this said, it’s natural for a positive diagnosis to spur many emotions, not the least of which is shame. So if you are still struggling with fears that you’ve somehow failed, try these four methods for reality checking yourself.

Let’s say you have a friend who works at a grocery store. She has no option for remote work. She’s fully vaccinated and boosted and always wears a mask. Still, she tests positive. You would never judge her, right? Heck, at this point we all know scores of people who have contracted Omicron, and, for the most part, our instinct is compassion, not outrage. Try to extend that generosity to yourself, too.

2. Take All the Precautions You Can

There are, of course, people who don’t take COVID seriously, and don’t care how or if their actions affect others. But that’s not you. According to Peg O’Connor, Ph.D., a Professor who specializes in moral philosophy, “There is a cruel irony here, I think. It is people who are so concerned with ‘Doing the Right Thing’ and meeting all their moral responsibilities who are most likely to feel like moral failures. Many will then try even harder, which creates more opportunities to feel like a failure.” This means it’s crucial to remind yourself that you’ve taken all the precautions you can, and a breakthrough case doesn’t signify that you’ve failed or done the wrong thing. When we say ‘all the precautions you can,’ we mean:

The good news is, the CDC has made it clear that fully vaccinated people who experience breakthrough infections are less likely to develop serious illness than those who are unvaccinated and get COVID-19. Still, if you’re feeling ashamed that you got a breakthrough case, that can contribute to your stress and anxiety levels, which can have all sorts of adverse physical effects, from diminished sleep quality to frequent headaches. Rather than wracking your brain for what you could’ve done differently, focus on self-care and regulating your stress levels.

4. Be Aware of Who You’re Following on Social Media

We’ve established that getting COVID isn’t a moral failing. That said, there are still people continuing to play the blame and shame game, particularly on social media. If you’ve noticed your great aunt or former neighbor posting judgmental screeds to their Instagram stories or Twitter feeds, go ahead and mute or unfollow them. After all, the last thing you need while you’re getting over COVID is to have someone shouting in your face—even digitally.