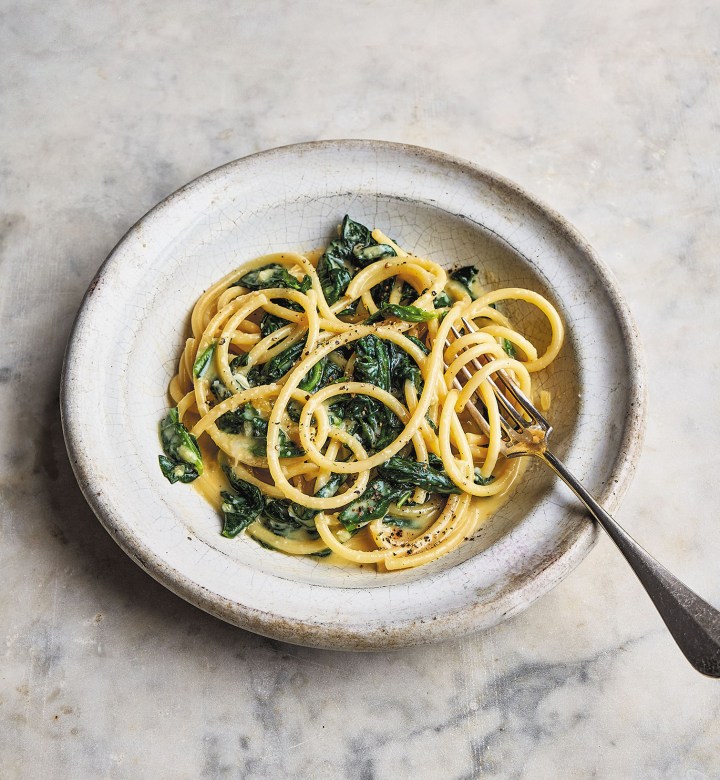 You want pasta and you want it now. Enter Mark Bittman’s recipe for spinach carbonara, from his newly revised edition of How to Cook Everything Fast. It’s less than ten ingredients, ready in 25 minutes and vegetarian to boot.

“With the richness of eggs and Parmesan and the fresh bite of lightly cooked spinach,” he writes, “this recipe offers a hearty meatless alternative to more traditional pasta carbonara.” (FYI, that’s here too, along with a few other tasty variations—scroll all the way down for those.)

Chef’s tip: According to Bittman, you can replace the spinach with escarole, kale, mustard greens, chard or broccoli rabe. Just cut the ones with large leaves and stems crosswise into ribbons and cook a little longer if necessary.

1. Bring a large pot of water to a boil and salt it.

2. Add 3 tablespoons olive oil to a large skillet over low heat. Trim off any thick stems from the spinach.

3. Increase the heat to medium-high. Cook the spinach, adding a handful at a time and stirring between batches, until the leaves are just wilted, about 5 minutes. Meanwhile, peel and chop the garlic, adding them to the skillet as soon as you can (they’ll cook with the spinach). When the spinach is tender, turn off the heat.

4. When the water boils, add the pasta and cook, stirring occasionally. Start tasting for doneness after 5 minutes.

5. Meanwhile, crack the eggs into a large bowl. Add the Parmesan cheese; season with salt and lots of pepper. Whisk with a fork to combine.

6. When the pasta is tender but not mushy, drain it, reserving about 1 cup cooking water. Add the pasta to the spinach and pour in the egg mixture. Toss, adding a splash of cooking water if you want to make it saucier. Taste and adjust the seasoning, and serve.

More Traditional Pasta Carbonara: Omit the spinach. Instead, cook 8 ounces chopped guanciale (similar to other cured pork cuts, only this one comes from the jowls and is a special treat), pancetta or bacon in the olive oil until crisp. Drain off some of the fat if you like—or not. Keep the garlic and proceed as directed.

Pasta with Asparagus and Eggs: Use cut pasta here, like orecchiette or fusilli. Substitute 1 pound asparagus for the spinach; trim and slice it on the diagonal into 1-inch pieces; chop the garlic at the same time, before cooking in Step 3. Start tasting after 3 minutes to catch the pasta one stage before your desired degree of doneness; then proceed.

Pasta with Mushrooms and Eggs: Instead of the spinach, trim and thinly slice 1 pound cremini mushrooms. Cook them in the olive oil until they’re tender and begin to dry out, 10 to 15 minutes. Add the garlic and cook for a minute more before proceeding.