Fellow royal fans: Let’s all send our best wishes to Prince George because he is turning nine years old today. The birthday messages have already started pouring in all across social media. And, of course, Queen Elizabeth had to post a special birthday tribute to her great-grandson.

The monarch posted a snapshot of them standing side-by-side on the royal family’s Instagram Story. The photo (taken at the queen’s Platinum Jubliee) shows the pair smiling at each other on the Buckingham Palace balcony. “Happy 9th birthday, Prince George,” the message read, alongside a cake emoji. 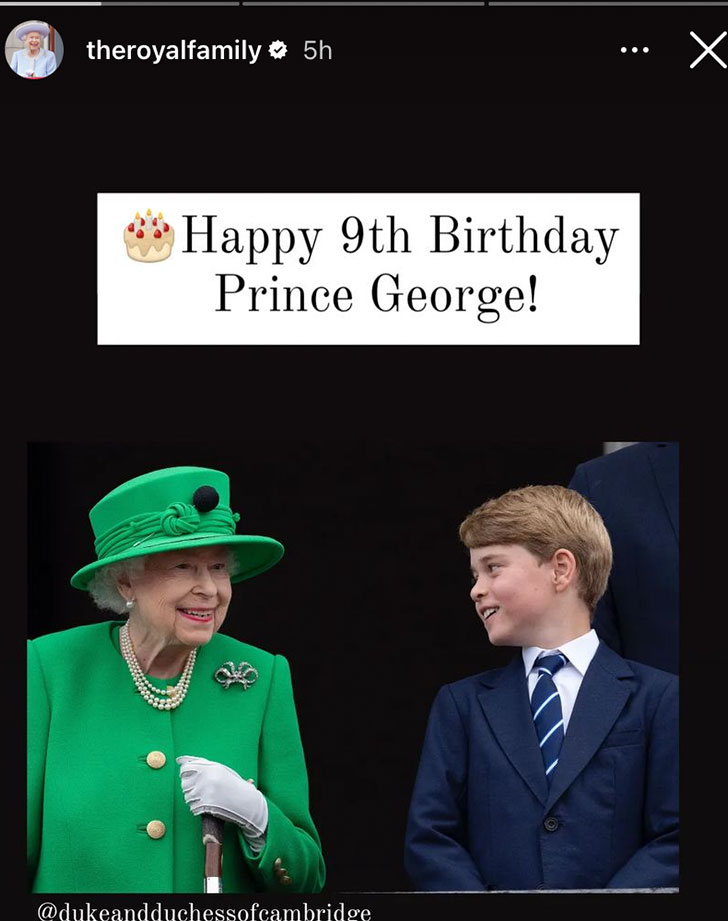 The queen could’ve easily posted a picture of the young royal surrounded by other members of the royal family. ﻿(Or she could’ve simply reposted his new bday portrait—more on that below.) Instead, she chose to share an intimate ﻿and meaningful snapshot of the two of them, further showing their close-knit bond as ﻿great-grandmother and great-grandson.

They both seem to be having a joyful time together (judging by their big smiles), making the post that much more special ﻿and revealing just how fond they are of one another.

Her Majesty also reposted the new birthday portrait of Prince George on the account’s IG Story. The never-before-seen photo was posted by his parents’—Kate Middleton and Prince William—joint account.

The young royal smiled for the camera and donned a blue collared shirt. He practically looked like a young Prince William in the photo, even down to the blonde hair. The caption read, “Prince George is turning 9!”