Yes, Baby Lilibet Is in the Royal Line of Succession—Here’s Where She Falls

Earlier this weekend, Queen Elizabeth II finally got to meet one of her youngest great-grandchildren (and her namesake), Lilibet “Lili” Diana Mountbatten-Windsor, during an exciting celebration of the queen's Platinum Jubilee. And in case you were wondering, Lilibet is on the list of Queen Elizabeth's successors.

Almost two months after she was born on June 4, 2021, Meghan Markle and Prince Harry’s youngest child was added to the British line of succession on the official website of the royal family. We had assumed baby Lili was going to get a spot in line, ﻿but we couldn't be positive considering her parents are no longer senior members of the royal family.﻿

However, since they let Archie keep his place, it makes sense that the same would go for his sister. Harry is sixth in line after Prince Charles, Prince William, Prince George, Princess Charlotte and Prince Louis, and his son Archie Harrison Mountbatten-Windsor is seventh.

Meanwhile, Baby Sussex falls right after her older brother and is eighth in line. The previous holder of that position, the Duke of York, has been pushed back one place as was the rest of the lineup. 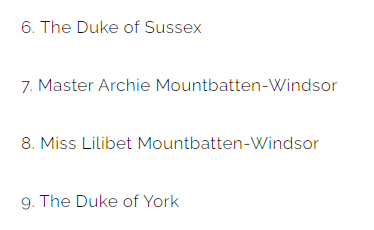 Whatever the reason was for the delay (the royal gang is very busy after all), we’re just happy to know Lili’s name is on the list. (Now if only we could see some pictures from her meeting with Queen Elizabeth.)

WHAT DOES THE OFFICIAL ROYAL FAMILY WEBSITE HAVE TO SAY ABOUT BABY ARCHIE? YOU’D BE SURPRISED