The Gossip Girl alum and husband Ryan Reynolds showed up together at the exclusive screening for the new Netflix sci-fi film. Lively donned a colorful Atelier Versace pastel dress with a high-leg slit.

The 34-year-old actress accessorized the look with circular purple earrings, an array of multi-colored beaded bracelets and light blue heels with a detailed jewel strap extended across the toe. She tied the look together with a high slicked-back ponytail. 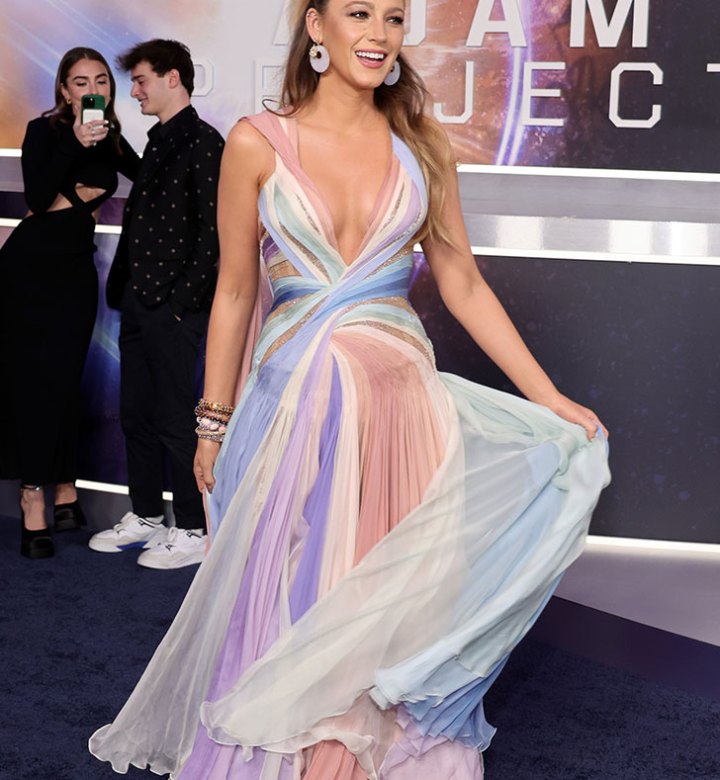 Lively attended the premiere to support her husband’s new movie. Reynolds, who produced and starred in the upcoming film, portrays a time-traveling fighter pilot named Adam Reed. After accidentally crash-landing in the year 2022, he teams up with his 12-year-old self to save the future. The ensemble cast also features notable names like Mark Ruffalo, Jennifer Garner, Zoe Saldana and more.

The celebrity couple recently made headlines for pleading to help the people of Ukraine amidst Russian troops invading the country. This past Saturday, the Deadpool actor released an official statement on Twitter that read: “In 48 hours, countless Ukrainians were forced to flee their homes to neighboring countries. They need protection. When you donate, we’ll match it up to $1,000,000, creating double the support. http://unrefugees.org/SupportUkraine.”

In a follow-up tweet, Lively shared the same link and wrote, “@VancityReynolds & I are doubling every $donated to @UNRefugeeAgency up to $1,000,000 click below if you can join us @UNRefugeeAgency is on the ground providing lifesaving aid, & working with neighboring countries to ensure protection for the 50,000+ who were just forced to flee.”

Love seeing Blake slay the red carpet while making important and impactful moves in the world.