15 Types of Nuts to Nosh on Between Meals

It’s no secret that nuts can provide a much-needed energy boost at any time of day and are a saving grace when late afternoon hanger strikes—hence why you snack on peanuts and pistachios on the regular. But did you know that there are many more types of nuts out there just waiting to tantalize the tastebuds? Here’s a roundup of the most delicious nuts around so that you can upgrade your trail mix, pronto. 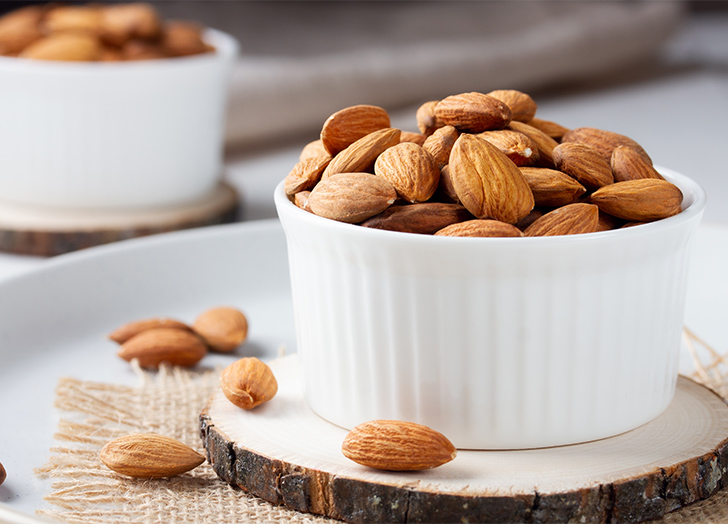 Almonds do indeed grow on almond trees, which makes it sound like they fit the definition of a tree nut. Surprisingly, though, these common nuts aren’t actually nuts at all, but rather seeds of a fruit. Now that we’ve blown your mind, let’s just agree to call almonds nuts and move onto more practical matters. For starters, almonds are an excellent source of protein, magnesium, vitamin E and healthy fats. These nutrient-dense little nuggets also boast a mild, and subtly sweet flavor that works well in savory and dessert dishes alike. Sprinkle them on salads and vegetable sides for a crunchy topping, grind them up to make a tasty breading for chicken and fish, or snack on them by the handful—it’s not hard to find a way to enjoy this versatile nut. 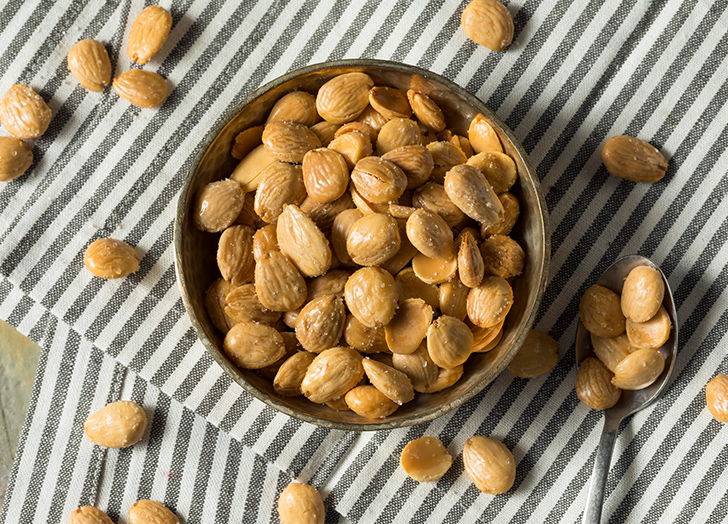 Not your ordinary almond—Marcona almonds, a special type imported from Spain, are prized for their extra sweet and buttery flavor as well as their soft, moist texture. They have a higher fat content and paler color than the ordinary California almond and are often tossed in olive oil and roasted before being packaged and sold. The rich flavor of Marcona almonds is well-suited for all manner of dishes. That said, their higher price tag and specialty status means that you’re far more likely to see these guys hanging out on a classy cheese plate or served as a standalone snack. 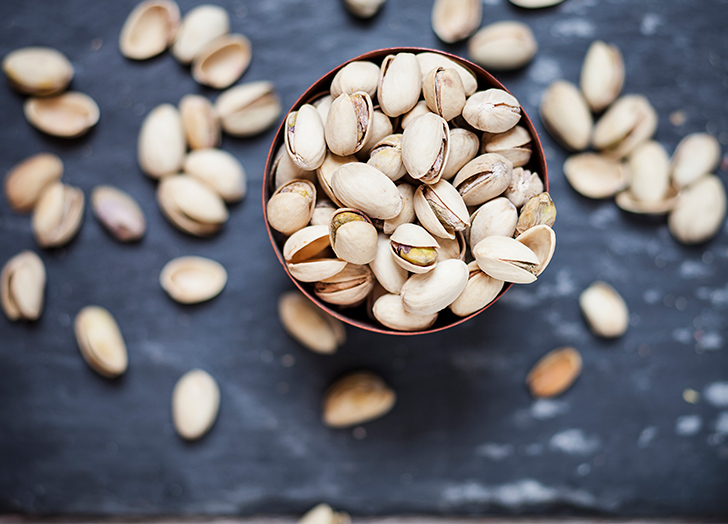 These small, green nuts are nutritional powerhouses—serving up an impressive amount of protein, fiber and healthy fat, along with a whole host of other nutrients. You can expect to find this nut nestled inside an inedible cream-colored shell, which must be pried apart and discarded prior to consumption. (Hint: If the shell hasn’t already started to split open, the nut isn’t ready to eat.) The task of shelling pistachios is well worth the effort, though, because the meat within boasts a particularly rich and buttery flavor that makes everything from seafood and meat to cake and ice cream more delicious. 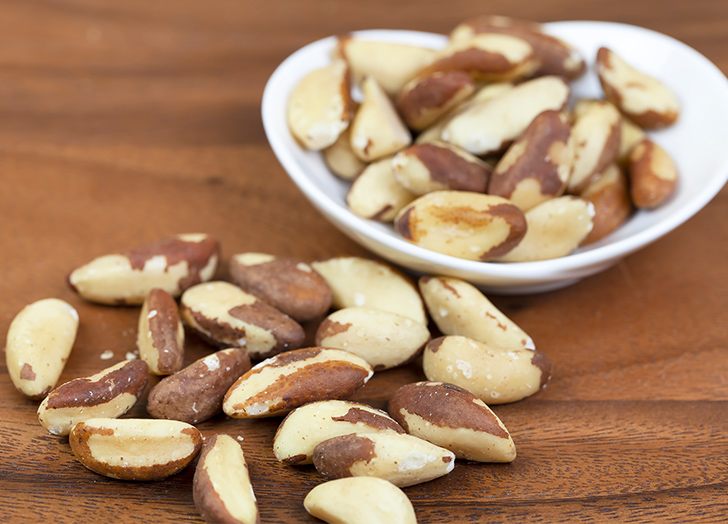 These relatively large “nuts” are the edible seeds of the Brazil nut tree—one of the largest trees native to the Amazon rainforest—and they’re widely consumed both for their smooth, subtle flavor and the health benefits they provide. For starters, brazil nuts are high in fat and contain more selenium—a mineral that has a significant impact on thyroid and immune health, among other things—than any other type of nut; they’re also an excellent and antioxidant-rich source of energy. To reap their health rewards, eat Brazil nuts raw or blanched—and feel free to experiment with using them in baked goods, too. 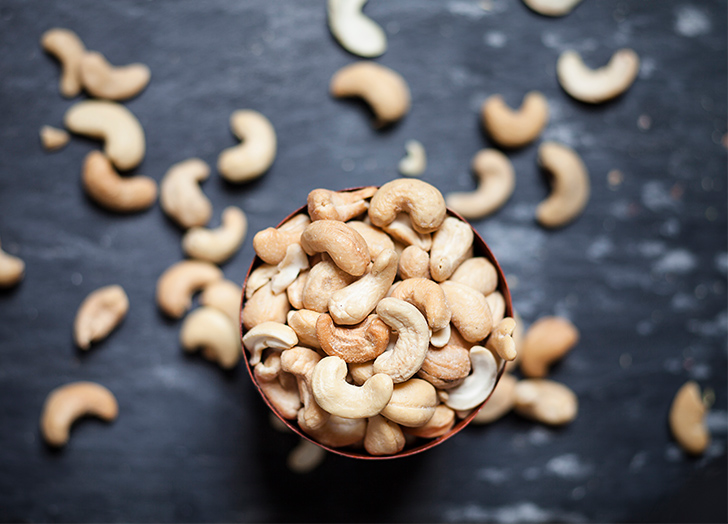 Cashews are pale-colored, elbow-shaped nuts—seeds, to be precise—that come from the fruit of a tropical evergreen tree by the same name. Thanks to their sweet and creamy flavor profile, cashews are a pleasantly crunchy addition to savory dishes such as stir-fries and curries, and have even become a mainstay of the dairy alternative scene. Of course, you can always count on a handful of salted cashews to serve as a satisfying nosh as well. 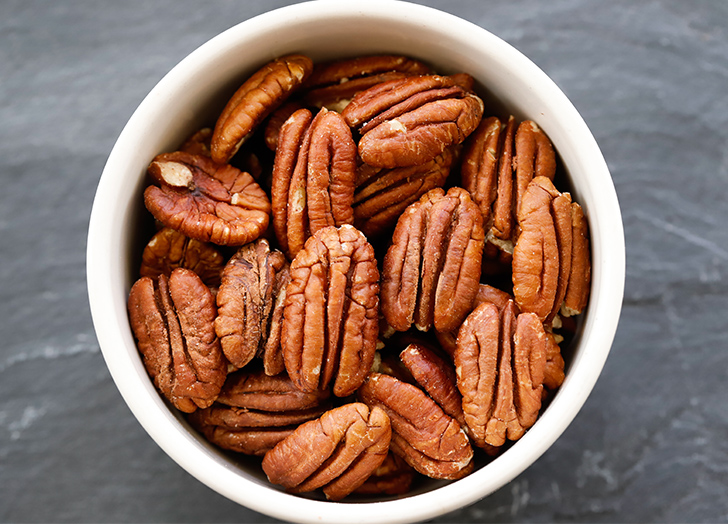 Large, oblong and prune-ish in appearance, pecans are a type of nut you’ll often encounter in baked goods and desserts. Indeed, that delicious caramelized crust on top of your sticky bun is pecan, the satisfying crunch in your ice cream is pecan, and that slice of pecan pie is, er, obviously pecan. As you might’ve guessed, pecans have a naturally sweet and buttery flavor that lends itself to such treats, but what might surprise you is that they’re a lot healthier than the desserts you often find them in. In fact, pecans are an excellent source of the minerals (potassium, calcium and magnesium) that play a key role in regulating blood pressure. They’re also a particularly oily nut, which isn’t such a bad thing, since the fat found in pecans is the healthy, monounsaturated kind. 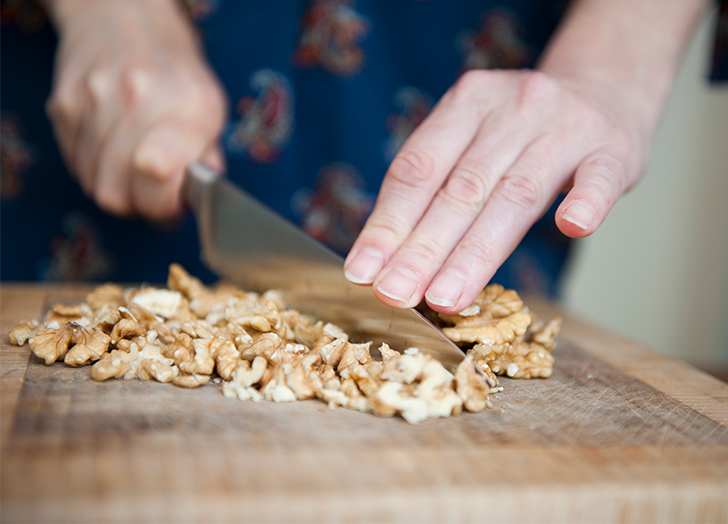 Walnuts are waxy, wavy and sort of weird looking nuts with a soft, crumbly texture and just a bit of crunch. You can add them to baked goods like chocolate chip cookies and banana bread, puree them with basil for a budget-friendly (but delicious) alternative to pine nut pesto, or use them as a salad garnish. No matter how you choose to enjoy this versatile nut, you’re sure to benefit from its fiber, healthy fat and mineral content. 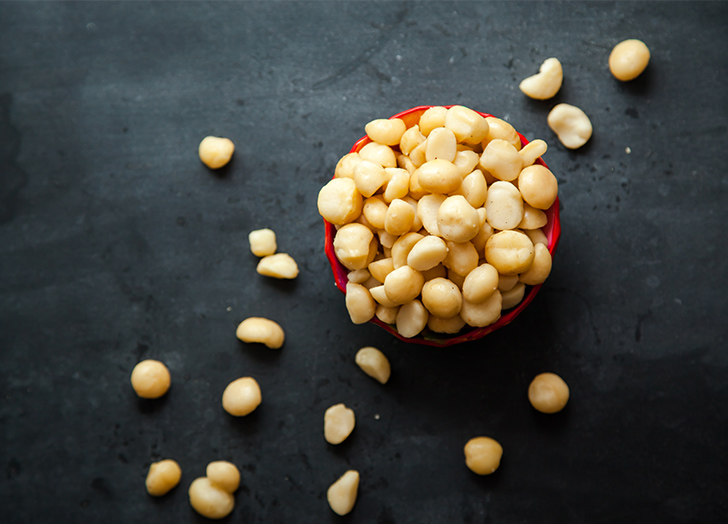 This Australian native looks like a chickpea, tastes like butter and is thought to aid weight loss and improve metabolic health—primarily because of its generous fiber and protein content. That’s right, this high calorie nut is more likely to curb your appetite than ruin your waistline, assuming you get your macadamia fix from more than just white chocolate chip cookies, that is. (Hint: You can add these guys to salads, and even puree them into soups.) 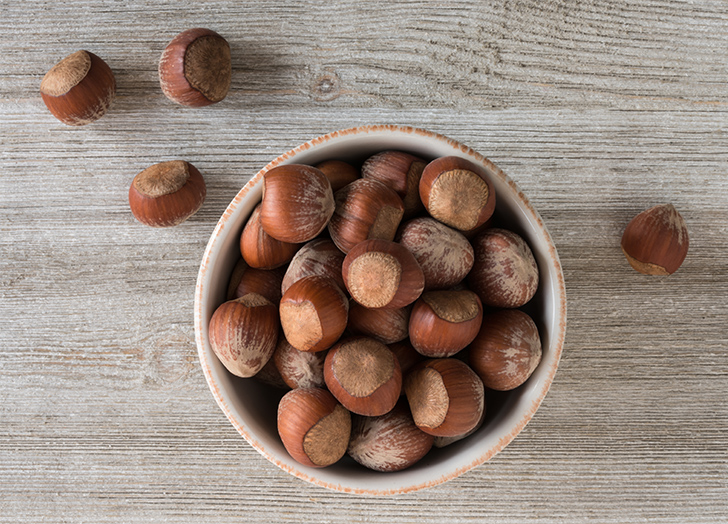 These pale-colored nuts are small, round and covered with a dark brown, flaky skin that falls away upon cooking. They also have a nutty and divinely creamy quality that pairs beautifully with chocolate…but if you’ve ever tasted Nutella, you already know that. What you might not know, however, is that when roasted, hazelnuts take on a deeper, earthier flavor that’s just right for snacking (with or without chocolate). 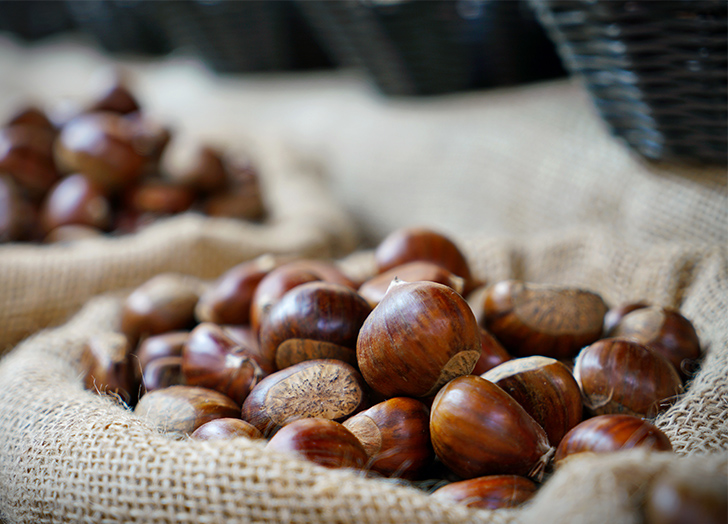 Take a cue from the Christmas carol and always roast your chestnuts: These beasts are decidedly bitter when raw, but once roasted—be it on an open fire or in your oven— and removed of their hard shells, they become soft, buttery and oh-so delicious. In fact, a roasted chestnut is so tender a morsel you might even mistake it for a bite of baked sweet potato. 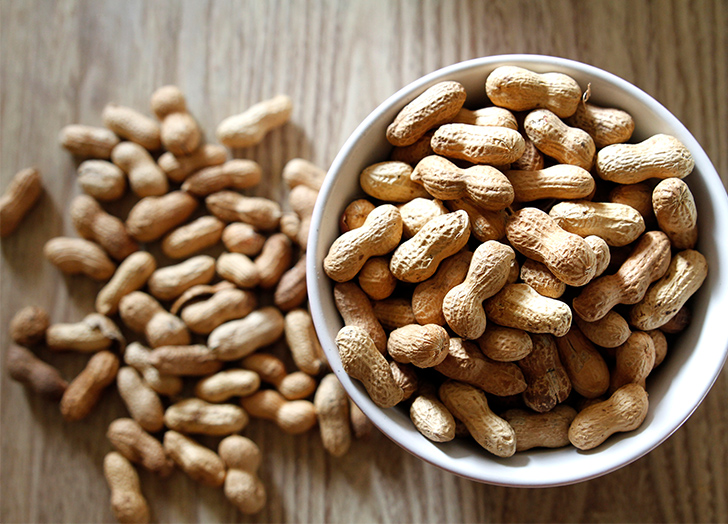 You munch them on airplanes and spread them on a sandwich (with jelly, of course). Yep, we’re talking about peanuts—the ubiquitous nut, also known as a goober, that goes from bland when raw to magical when roasted. Indeed, the nuts within these figure eight-shaped shells are nothing to write home about until they meet some heat and develop a slightly sweet, smoky flavor that goes down easily in everything from trail mix to pad Thai. 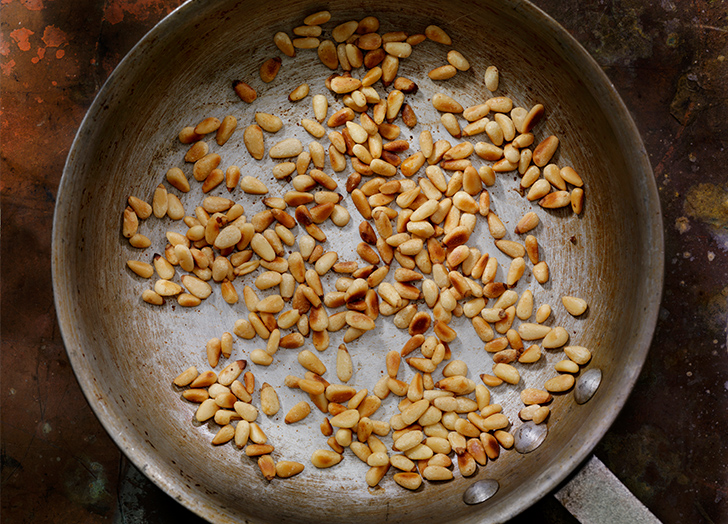 Pine nuts, or pignoli, are ivory, teardrop-shaped nuts with a distinctly creamy, soft texture and a flavor that’s remarkably buttery and mild. The small size and delicate nutty taste of pine nuts also makes them ideal for tossing into pastas, salads, pilafs and just about any other savory dish that might benefit from a subtle crunch. Of course, they’re also the star ingredient in any recipe for classic pesto sauce. 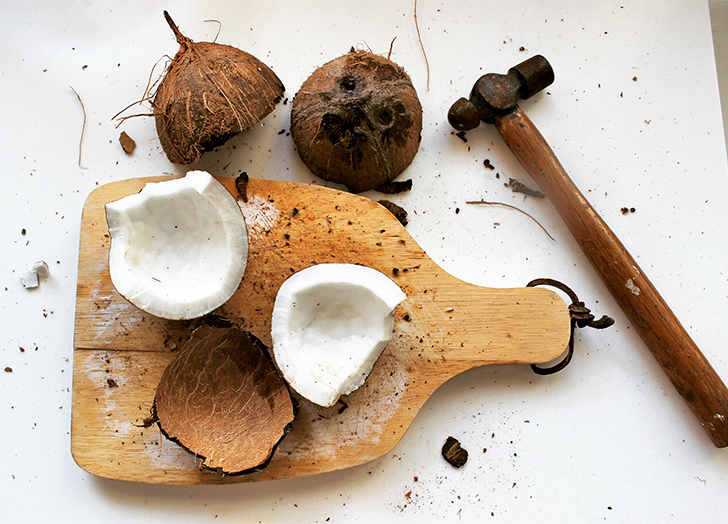 The coconut is by far the largest tree nut on our list, and also your favorite one if you like piña coladas and dancing in the rain (sorry, we had to). It’s also not entirely clear whether coconut is actually a nut, a fruit or both, but we don’t need to get into the nitty gritty of it. The most important thing to know about the coconut is that it has a hard shell on the outside and creamy, sweet meat within. As such, coconut is commonly used in desserts and main courses alike—particularly in Southeast Asian cuisine where it’s a key ingredient in curries, soups and other savory dishes. 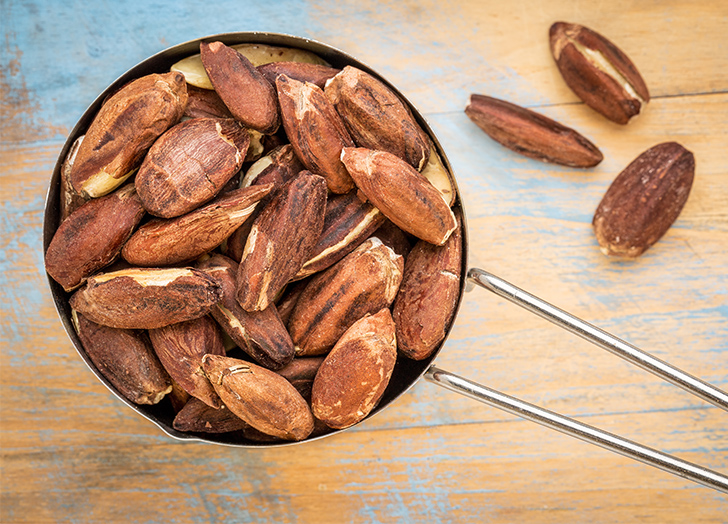 Pili nuts look like petite almonds and have a mild and creamy flavor, much like pine nuts—and, just like pine nuts, they’re particularly tasty when lightly toasted. Send your pili nuts into the oven for a few minutes until they turn golden brown and use them to garnish salads and add texture to pastas. Alternatively, you can just toss them with olive oil and salt for a protein-rich snack that’s loaded with calcium and potassium, to boot. 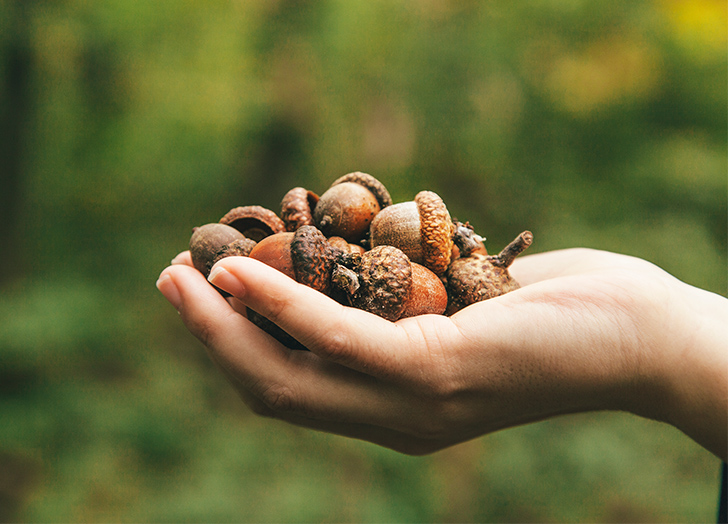 Oak trees produce acorns, and everyone knows that squirrels love them—but few people realize that humans can eat them, too. Well, if foraging is your jam, we’ve got good news for you: Acorns are indeed edible for us two-legged folk—and quite nutritious, in fact, provided you prepare them safely. Before you get too excited, we should tell you that eating a raw acorn might cause you some discomfort. These guys are loaded with gut-irritating tannins that might make your bowels revolt. Fortunately, you can easily remove most of the tannins by cracking open an acorn and soaking the inner nut in warm water for several hours. Once that’s done, they’re ready to roast (or dry and turn into flour if you’re feeling fancy).

Are Cashews Healthy? Because We’re Nuts for Them