How to Cook Bacon in the Oven, AKA the Simple, Hassle-Free Method That Delivers Perfect Results Every Time 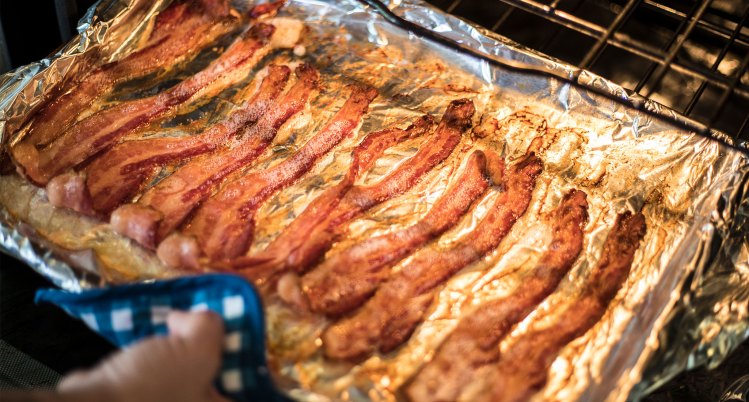 It’s common knowledge that perfectly cooked bacon makes everything better…and if you’re accustomed to making it on the stove, you probably also know that those glorious strips of pork can become burnt and bitter in the blink of an eye. The good news is that our guide on how to cook bacon in the oven solves this problem—you know, so you never have to start your day off with a disappointing breakfast and a messy stovetop again.

Why Should You Cook Bacon in the Oven?

The oven-frying method of cooking bacon is a serious game-changer. For starters, you don’t have to hover over the stove, flipping, rearranging and babysitting your bacon until it’s done. The heat is also more evenly distributed in the oven, which makes it much easier to cook the strips of bacon to perfection every time (i.e., without the common stovetop issue of uneven heating). Finally, the oven method won’t turn your stovetop into a grease-splattered eyesore, and that’s pretty neat. (Right?)

Your oven should be preheated to a toasty 400℉ before you send the bacon inside. (And don’t be tempted to slide your pork strips in before the oven has finished preheating—you want your cooker to be nice and hot.)

Line a large baking sheet with aluminum foil. This will prevent the bacon from sticking and make clean-up a breeze.

Step 3: Lay the Bacon Out on the Pan

Separate the strips of bacon and arrange them on the pan, so that they’re close but not touching. Erin Clarke, the cookbook author and blogger behind Well Plated by Erin, recommends putting a wire rack that has been greased with cooking spray on top of the lined baking sheet and placing the strips of bacon on that for an extra crispy finished product.

Put the pan of bacon on the center rack of the 400℉ oven and leave it to cook (without flipping) for roughly 10 to 20 minutes, depending on how thick the cut. That said, the best way to ensure the bacon is crisped to your liking is to start checking on it at the 10-minute mark, since ovens and personal preferences vary.

Ah, can you smell that? Carefully remove the perfectly cooked bacon from the oven and pat yourself on the back. Then, use a pair of tongs to transfer the bacon to a paper towel-lined plate. (The paper towel is there to absorb the excess grease.) When the bacon is cool enough to touch, it’s time to dig in.

What Should You Do with Leftover Bacon Grease?

It’s truly a blessing that all that bacon fat isn’t coating the surface of your stovetop…but it didn’t just disappear into thin air. Indeed, when the cooking process is complete, you’ll find a pool of grease on the foil-lined baking sheet. Once the bacon grease has cooled completely, you have two options: You can either wrap it up in the foil and throw it in the trash, or carefully transfer it to a jar and store it in the fridge for three to six months (or in the freezer forever). But while we’re counting blessings, it’s probably worth mentioning that leftover bacon grease is basically a gift from the gods—namely because, when used as a cooking oil, that leftover fat boasts a high smoking point and loads of umami flavor, to boot. In other words, we strongly suggest you save your bacon fat in the fridge so you can use it to roast veggies and fry everything from eggs to grilled cheese sandwiches.

How to Store Cooked Bacon

Now that you know how easy it is to prepare perfectly crisped bacon in the oven, you’re probably tempted to make more than you can eat in one go. Fortunately, this is a perfectly reasonable thing to do—provided you know how to store cooked bacon for future use, that is. Per the food safety experts at StillTasty.com, cooked strips of bacon should be tightly wrapped in plastic wrap or aluminum foil, sealed in an airtight container and then stored in the refrigerator or freezer, where they will stay fresh for up to five days or three months, respectively.

How to Use Cooked Bacon

We touched on this already, but there’s basically no wrong way to use bacon. Once cooked to your liking, store your leftover bacon according to the guidelines above and use it to make a decadent pasta carbonara, or crumble it up and add it to soups and salads for a tasty, salty garnish. Still in need of inspiration? Just check out the recipes below.

How to Keep Bacon Warm All Breakfast Long

25 Gluten-Free Halloween Treats That Are So Good, It’s Scary