How Long Does Bacon Last in the Fridge? 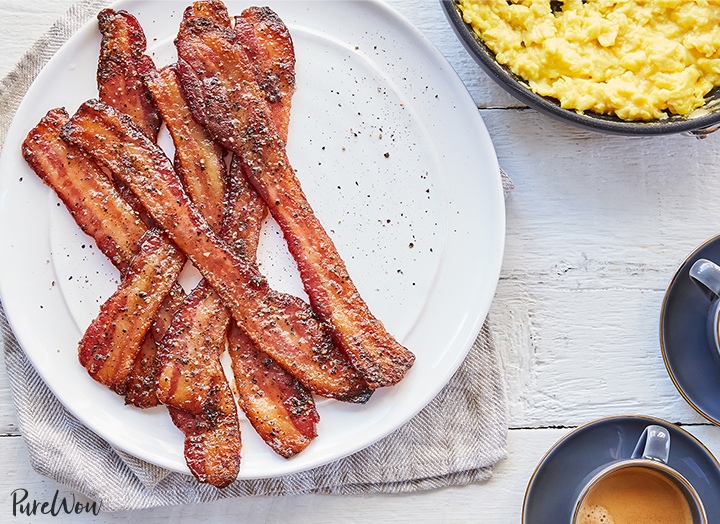 If bacon is a part of your diet, we don’t need to tell you how delicious it is. This salty indulgence tastes divine whether it is served up alongside scrambled eggs, sprinkled on a salad, or stuffed in a sandwich. Unless, of course, the bacon went bad before it met the skillet. So how long does bacon last in the fridge? We have the answer, plus some additional tips on how to double-check for freshness so you can enjoy this prized pork product at peak quality every time.

How Long Does Bacon Last in the Fridge?

Before we can answer this question, it’s important to note that freshness guidelines for bacon are entirely dependent on proper storage. In other words, if you don’t treat your bacon right to begin with, it will go bad in the blink of an eye. To store your bacon properly and extend its lifespan, it must be promptly refrigerated and kept at a consistent temperature of 40ºF or below, whether cooked or raw. In these conditions, the Food Safety Inspection Service (FSIS) says that raw bacon will remain fresh for seven days—but the trick is knowing when to start counting. Here are the guidelines to keep in mind:

What About Dry-Cured Bacon?

The above guidelines apply to the standard, mass-produced bacon that’s most often sold in the United States (think Oscar Mayer). That said, some types of bacon (i.e., dry-cured) will stay fresh in the fridge for longer. Per the experts at Fleishers Butchery, generic bacon, the kind with the seven-day rule, is almost always wet-cured—a quicker curing process that involves either injecting liquid curing agents into the meat or brining it in a curing solution. Dry-curing, on the other hand, is a more time-consuming process in which the pork is rubbed with a combination of dry curing agents (often celery salt) and hung to dry.

So what does it mean if your bacon says it’s ‘uncured’? Probably not what you think. Uncured bacon is not a thing: In reality, all bacon has been cured using one of the methods described above. However, because of a labeling loophole in the FDA’s definition of curing, companies can still use the rather misleading term to refer to their dry-cured product—a popular, but pricey item often found at whole food stores or at butcher shops in slab form. In other words, if the bacon you brought home from the store claims to be ‘uncured’ or nitrite-free, what the package means to say is that it has been dry-cured with celery salt—an ingredient that contains naturally-occurring nitrite. (FYI: Per the Washington Post, there’s no evidence that dry-cured bacon is any “healthier” or has less nitrite than mass-produced bacon.)

If you’re unsure what kind of bacon you’re working with, just check the label and you’ll know whether it has been dry-cured or not.

The relevant distinction between dry-cured and wet-cured bacon is that the dry-cured stuff lasts slightly longer in the fridge. According to the FSIS, if the label says nitrite-free, and the dry-cured bacon has not been opened, it will stay fresh for up to three weeks in the refrigerator. Bonus: If you’re buying dry-cured, slab bacon from a local butcher, your (untouched) hunk of meat will be safe to eat for anywhere from four to six weeks in the fridge.

Confused? You’re not alone. Your best bet when it comes to bacon is to just stick with the seven-day rule regardless of the curing process and you’ll be in the clear. Better yet, freeze your bacon and you’ll get months of enjoyment out of every package you bring home.

How Long Does Bacon Last in the Freezer?

So you bought more bacon at the store than you can devour in a single week. (No judgment.) Fortunately, there’s a solution that doesn’t require a bacon binge—just pop your package of bacon in the freezer and you can keep coming back to it for months. When stored in an airtight container at 0ºF or below (i.e., standard freezer temperature) bacon, raw or cooked, will stay fresh until the end of time. Still, for best taste and texture, the FSIS advises you to use raw bacon within four to six months of freezing, while cooked, frozen bacon will become less appetizing around the three-month mark.

How to Tell If Bacon Is Past Its Prime

Trust your senses when it comes to deciding whether or not your bacon has taken a turn for the worse. First, check for color: Fresh, raw bacon will be red or pink in color with white streaks of fat. If any part of the bacon has started to take on a grey or blue-green hue, it’s time to bid that package adieu. Similarly, mold spots, even when found on otherwise rosy strips of bacon, are bad news. Discoloration is an indication of late-stage spoilage, though—so even if the bacon looks normal, you should still give it a sniff before you proceed to ensure it has the mild scent you’d expect from fresh meat. If your nose detects a stale, fishy or sour odor, that bacon is a no-go.