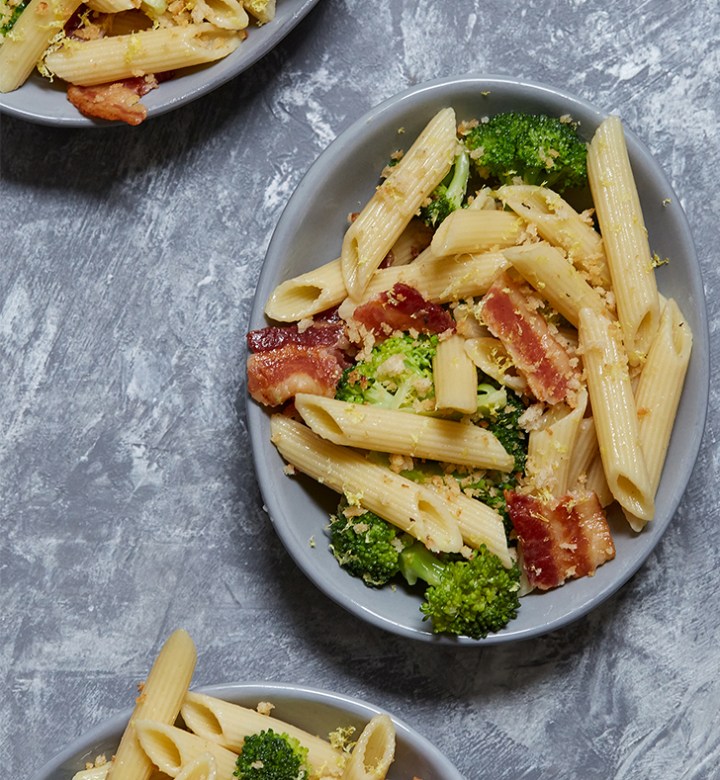 We've learned a very important lesson. Roasted broccoli, crispy bacon and hearty pasta make one helluva salad. Serve it as a side dish or a main dish—your call.

5 Fall Pasta Salad Recipes You Need in Your Life

1 pound bite-sized pasta (we use penne)

1. Heat a large skillet over medium heat. Season the bacon generously with black pepper. Add the bacon to the pan and cook, stirring occasionally, until very crisp.

2. Remove the bacon from the pan and drain on absorbent paper towels. Carefully pour ½ cup of the bacon fat into a medium bowl. Discard the remaining grease and let both the bacon and the grease cool slightly.

3. Preheat the oven to 400°F. Line a baking sheet with parchment paper.

4. Arrange the broccoli in an even layer on the baking sheet and drizzle with the olive oil. Season with salt and pepper and then roast until lightly golden and tender, 17 to 20 minutes.

5. While the broccoli roasts, whisk the cooled bacon grease with the mustard and vinegar to combine.

6. Bring a large pot of salted water to a rolling boil. Add the pasta and cook according to the package’s instructions. Drain and let cool slightly.

7. In a medium bowl, stir the bread crumbs with the lemon zest, garlic powder and cayenne to combine. Add the melted butter and toss to coat.

8. When the broccoli is tender and golden, remove the tray from the oven and sprinkle the bread-crumb mixture over the broccoli in an even layer. Return to the oven for 5 minutes more.

9. Toss the cooled pasta with the dressing to coat. Fold in the broccoli and the bacon.

10. Serve immediately or store in the refrigerator in an airtight container for up to three days.