Everything You Need to Know About the Gemini Personality

By Michaela Magliochetti
With additional reporting from
Jaime Wright 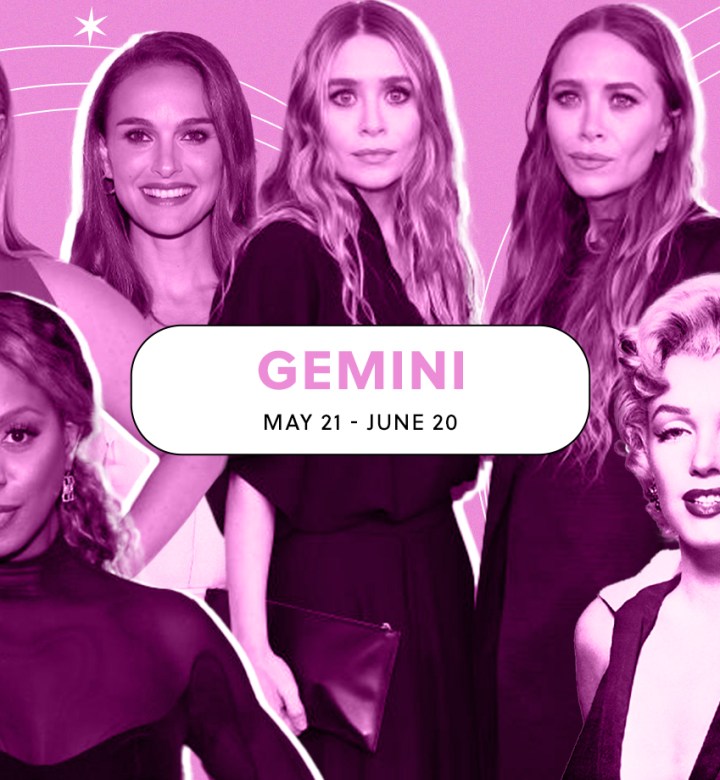 If you can’t make it through this sentence without firing up Twitter, gazing off into the clouds (wait, are those stratus or cumulus?) or wondering where you left your keys, you might be a Gemini. Sure, our flighty air-sign friends try to stay on task, but there are only 24 hours in a day (and so many possibilities). The chameleons of the zodiac are always adapting based on the situations or groups surrounding them—which makes them tougher than most signs to define. Read on to demystify the elusive Gemini personality once and for all.

Air. Like the breeze dancing around us, the mind of an air element is always on the move. For those born under air signs (Aquarius, Gemini and Libra), there’s a tendency to be lost in thought rather than committing to action. This translates to brilliant ideas on one end and anxious over thinking on the other.

Mutable. This modality is home to the most adaptable signs in the zodiac: Gemini, Virgo, Sagittarius and Pisces. Unruffled by change, they’re able to grow and transform based on their new surroundings. Find them volunteering for that six-month work trip in Japan or lining up to try that buzzy new boxing gym. Think of mutable signs as the tower of half-read books on your bedside table; they possess a curiosity and excitement for new ideas, but struggle to see projects to completion.

Mercury. It’s the fastest planet to orbit the sun, and the signs under Mercury’s rule (Gemini and Virgo) are quick-witted. The messenger planet dictates our learning style and how we communicate: Do we send blunt, decisive texts (Mercury in Aries) or pile on the heart emojis (Mercury in Pisces)? Take a peek at your Mercury placement in your chart to understand how you shape your ideas.

The twins. In Greek mythology, the constellation was said to embody the twin sons of Zeus: Castor and Pollux. We can think of the twins as a representation of Gemini’s duality. Perpetually “of two minds” about a topic, Geminis are able to see every side of a situation. The twins hold within them enough thoughts and stances for two (or more) people, so even when they’re alone, their rapid inner dialogue makes the room feel full. Two heads are better than one, right?

“Quiet.” If Gemini is able to quiet her lightning-quick thoughts, she can gain some much-needed peace and clarity. Meditation is her greatest ally. (See every sign’s one-word mantra.)

Gemini being symbolized by the twins often gives them a bad rap for having a “split personality.” But really, Geminis don’t just have two sides, they have infinite sides. So of course Walt Whitman who wrote, “Do I contradict myself? / Very well then, I contradict myself. / (I am large, I contain multitudes)” was a Gemini. Other Geminis include writers Allen Ginsberg, Dr. Cornel West, Joyce Carol Oates, Salman Rushdie, Arthur Conan Doyle and Ralph Waldo Emerson; timeless and distinct actors Nicole Kidman, Morgan Freeman and Sir Ian McKellan; Rock and Roll Hall of Famers Stevie Nicks, Bob Dylan, Prince and Paul McCartney; wordsmiths Lauryn Hill, Tupac Shakur, Notorious B.I.G. and Kendrick Lamar; mischievous and irreverent performers Helena Bonham Carter, Isadora Duncan, Gene Wilder, Isabella Rosellini and Mike Myers; icons of their time Judy Garland and Marilyn Monroe; actor activists Laverne Cox and Natalie Portman; the visionary Frank Lloyd Wright; and a few Presidents, including JFK. Geminis really can do it all.

What Are Gemini’s Best Traits?

Geminis remind us to see the world with childlike curiosity. From Jungian psychology to soap making, these intellectual thinkers have an unrelenting thirst for knowledge and new experiences. While your Sunday plans might involve melting into the nearest couch, clever Gemini will convince you to hit up the modern art museum, go rock climbing and try your hand at pottery—all before noon. These fleeting fascinations ensure there’s never a dull moment with a Gem in your life.

What Are Gemini’s Worst Traits?

Gemini wants to experience all life has to offer, but the scatterbrained twins struggle with stability and commitment. Think forgetting they’d help you move, showing up late to lunch or leaving your texts unread in favor of a thrilling political documentary. This mental disorganization reads as flakiness (or worse, apathy) to friends and family who want to count on Gemini. If she’s not careful, Gem’s erratic nature can mean losing out on deep, fulfilling partnerships.

What Are the Best Careers for Gemini?

Gemini’s frenetic energy can translate to a short attention span in the workplace, so the mercurial signs are best suited for careers with plenty of variety and mental simulation. Communication is Gemini’s greatest gift, which she can express beautifully through art, writing and speech. Poetry, videography and songwriting will showcase Gemini’s creativity, while journalism plays into the sign’s inquisitive nature. Additionally, Gemini’s sharp intellect and eternal love of learning make teaching a natural career choice.

How Is Gemini as a friend?

Effervescent and open-minded, your Gemini pal is up for any adventure (particularly if it’s a last-minute idea). And while she’ll happily go along with your skydiving plans, Gemini is just as happy discussing Eastern philosophy at a coffee shop. Since they’re able to see your perspective with such clarity, your Gemini friends are among the least judgmental in the zodiac. You’ll feel comfortable telling Gem just about anything and can expect complete acceptance in return.

How Is Gemini as a Parent?

Meet “the cool mom” of the constellations. The Gemini parent is dancing side by side with their kid on TikTok and blasting the latest Lizzo single at fourth-grade pickup. Gemini exhibits extreme tolerance with her minis. She’ll accept her kid’s every mood, phase and fantasy with an open heart. And while Gem’s lenience derives from a deep understanding of her child, she may lack the authority needed to set rigid rules and boundaries as a parent. Gemini will need to sacrifice being her kids’ BFF in order to discipline her little ones and earn their respect.

How Is Gemini as a Partner?

Despite what you may have heard (from those who’ve fallen victim to Gemini’s wandering eye), these fickle signs are, in fact, capable of long-term relationships. Gemini will charm potential partners with her wit and magnetism (look out for that mischievous smile) and will ultimately choose a partner who fascinates her. Loyalty will come easily to a Gem who meets her intellectual match. Those coupled up with the airy sign can expect lightness and spontaneity at every turn—Gemini is skilled at infusing novelty into even the longest of relationships. Just be careful not to control her: A happy Gemini is one who is free to explore her own interests without being bound to another’s schedule.

What Are Gemini’s Hidden Traits?

Gemini has long been labeled as a two-face, but her understanding of two stances shouldn’t be written off as superficiality. Just as the sign quickly absorbs the ideas of those around her, she also consumes the emotions of others. When Gemini is speaking with a friend, coworker or even a stranger, she can truly put herself in that person’s shoes. This keen understanding serves as a secret gift: empathy. This sign’s sensitivity allows her to relate so closely with friends and impart the wisdom and advice they need most.

For Gemini, 2022 has been a year that’s hard to pin down. Though there have been plenty of major shifts in schedule and routine, the impact feels less personal and more external, like friends and family are having the more important experiences and Gemini is watching from the sidelines. That being said, Geminis have definitely spent this year taking on a greater load of responsibility. With structure planet Saturn transiting their travel and higher learning sector since 2020, Geminis are going back to school, becoming mentors at work, and generally expanding their worldview. Whether they’re moving abroad or staying in their lifelong home, they’re taking their role in public much more seriously. With eclipses and the innovation planet Uranus bringing some instability to both their physical and mental health, it’s important for them to stay positive and focus on their long term goals.

The final third of the year brings Gemini’s personal expression and self care center stage as action planet Mars spends an extended period (August 20, 2022 - March 25, 2023) in their sign. This influence has Gems feeling both literally and figuratively inflamed—more irritable than usual, struggling with a rash or other skin problems and just constantly having excess energy to burn. With luck planet Jupiter moving through both their career and friendship sectors this year though, it’s necessary for them to put all that energy into pushing forward in their career and spending more time socializing. What feels like a sketch now will take more shape next year. Trust!