Your Next Weekend Escape: Toronto

We get it: The thought of traveling even farther north than the polar vortex that is New York City seems a little foolhardy. But do you know who has this winter thing figured out? Canadians. The country’s largest city is only a puddle jumper away and has loads more to offer than just subzero temperatures. Apart from its reputation for great theater and film (Toronto International Film Fest, anyone?), the culinary scene has exploded in recent years and Travel + Leisure just named the city one of the new must-see cultural destinations for 2019. Read on for our favorite places to eat, drink and explore. 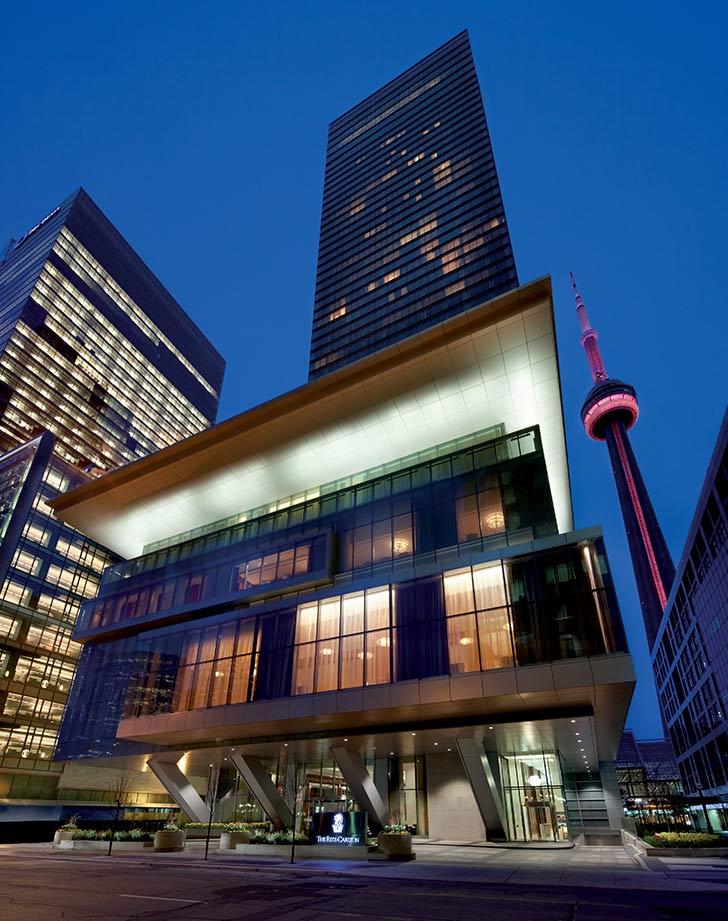 Courtesy of the Ritz-Carlton

Savvy travelers should book flights on Porter Airlines, which flies directly into Billy Bishop Toronto City Airport. The small hub is less than a ten-minute drive from the city’s downtown, which makes getting in and out an absolute breeze. Take that, JFK.

Downtown is a great launching point for your explorations. One of our favorite hotels in the area is the Ritz-Carlton, known for its oversized rooms, views of Lake Ontario and Spa My Blend by Clarins, the only location of the luxe pampering spot within the Americas. Sports fans should check out nearby Delta Hotels Toronto, which is centrally located between the Rogers Centre, where the Blue Jays baseball team plays, and the Scotiabank Arena, home to the NHL’s Maple Leafs.

Those looking for a more boutique experience will be wowed by the historic Gladstone Hotel, positioned between the buzzy neighborhoods of West Queen West and Parkdale. Each of the 37 rooms is unique and designed by a different artist. 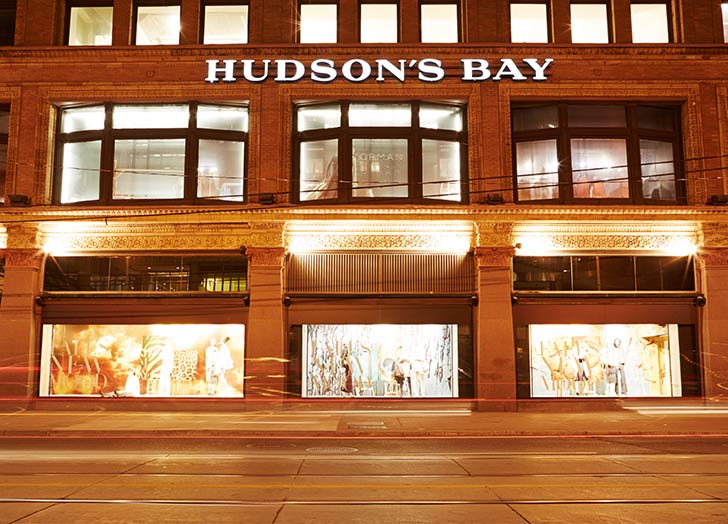 You know those adorable, primary-color-striped blankets that are on every Instagram influencer’s bed? Yeah, they probably got them at Hudson’s Bay—or simply the Bay to its fans. And since the storied department store doesn’t ship to the U.S., make sure to leave extra room in your luggage for loads of merchandise with their trademark print. In the HBC section of the store (you’ll know it when you see it), they have everything from dog sweaters to water bottles to, of course, blankets in every size and material. Don’t miss the gorgeous food hall Pusateri’s in the basement, where you can pick up loads of Squish gummies to bring home as souvenirs. They come in flavors like matcha-peach and honey-maracuja, and as of now they are not available in the states.

While luxury shoppers can occupy themselves for days with downtown’s robust offerings, like the Eaton Centre shopping mall or the high-end department store Holt Renfrew, those looking for something more unique should head to West Queen West, a neighborhood known for independent retailers and contemporary galleries. Make a beeline for the flagship of Drake General Store, which stocks amazing Canadian-themed swag like socks emblazoned with Mounties on horseback and tiny enamel raccoon pins. Green-beauty fanatics will love Helen + Hildegard, just a few doors down. The modern apothecary stocks both local and international labels; we especially love the Canadian brand Rebels Refinery’s lip balms encased in mini skulls. 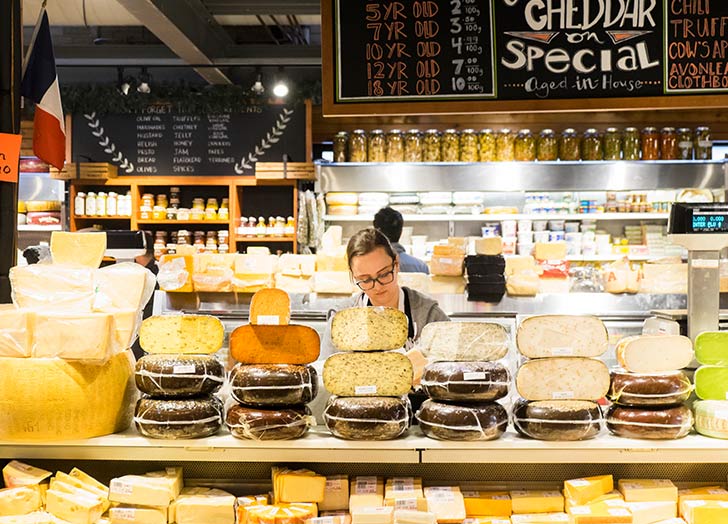 So what exactly is Canadian food? Get a delicious primer at Bannock, which bills itself as serving Canadian comfort food. Many dishes, like the smoked salmon and scrambled eggs, are served with the eponymous bannock bread, a round flatbread that’s ubiquitous up north. Pro tip: Peameal bacon, which you’ll see on many a menu, is what we Americans refer to as Canadian bacon.

Toronto’s excellent food scene is hardly just Canadian restaurants, however. The fourth-largest city in North America is known for having legendary Italian and Chinese food, plus world-class delis, barbecue spots and pastries. A spin around St. Lawrence Market (similar to New York’s Chelsea Market) is a fantastic introduction to the many cuisines that Toronto does so well— everything from traditional French croissants to (obviously) maple syrup. And if you have a sweet tooth, don’t leave without trying a sugary butter tart while in the city: It’s one of Canada’s essential desserts.

For a chic night out, book a table well in advance at Richmond Station. The seasonal menu features fresh roasted vegetables and rib-sticking pastas like cavatelli with a white-wine butter sauce. Pasta lovers will also adore the menu at TOCA, which, in addition to Italian classics, also boasts a very cool cheese cave that they’ll let you explore if you ask.

Finish off your night with “a little glass of sparkling while you think” (seriously, that’s what it’s called on the menu) at trendy wine bar Paris Paris. You’ll need time to peruse the gargantuan wine list anyway. 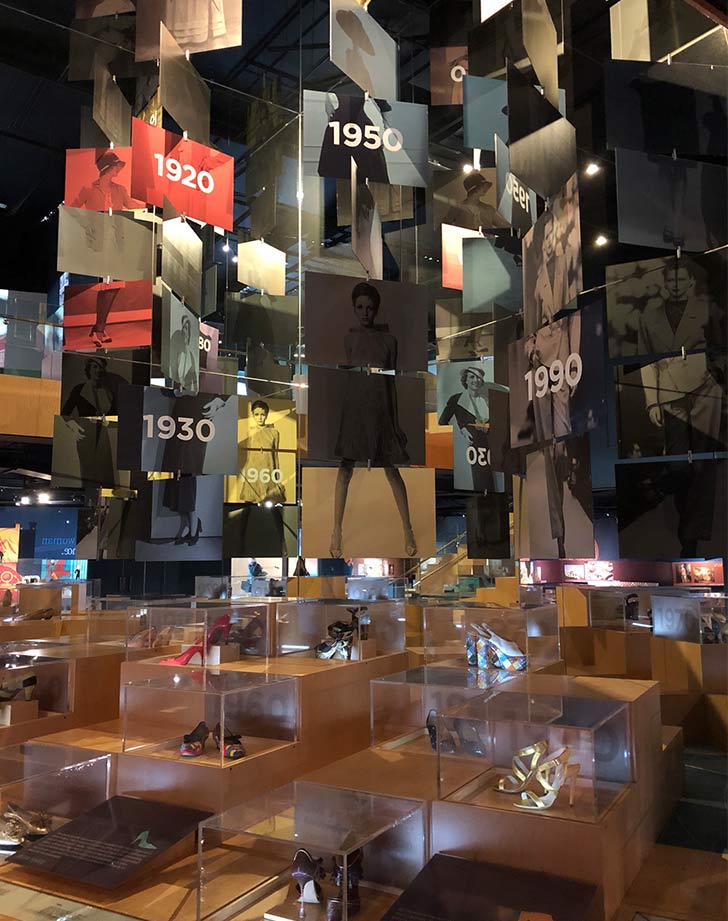 One of Toronto’s coolest urban-planning features is also one of the handiest in the cold: The PATH. This network of subterranean tunnels is more than 15 miles long and connects more thana thousand restaurants, retail shops and businesses. We’ve also never seen more coffee shops than in this underground expanse, so you won’t go un-caffeinated.

Aboveground, the city is home to an impressive number of museums, galleries and theaters. Especially exciting this year is the reopening and relocation of the Museum of Contemporary Art Toronto Canada, as well as the launch of the Toronto Biennial of Art (starting this September). Carrie Bradshaw fans should definitely make time for the Bata Shoe Museum, amultilevel space dedicated to the history and art of footwear.

Theater buffs are also in for a treat here: Many Broadway favorites like Dear Evan Hansen, The Lion King and Come from Away all have runs planned in the city for 2019. And hey, maybe it’ll be easier than trying to score tickets in New York? And, of course, there is the famed TorontoInternational Film Festival, held every year in September and guaranteed to be prime people watching for anyone who loves A-list actors. Just don’t hold your breath for former Toronto resident Meghan Markle—er, the Duchess of Sussex.

The Coziest Winter Getaways Within 3 Hours of NYC

10 Bucket-List Trips for Best Friends of Any Age