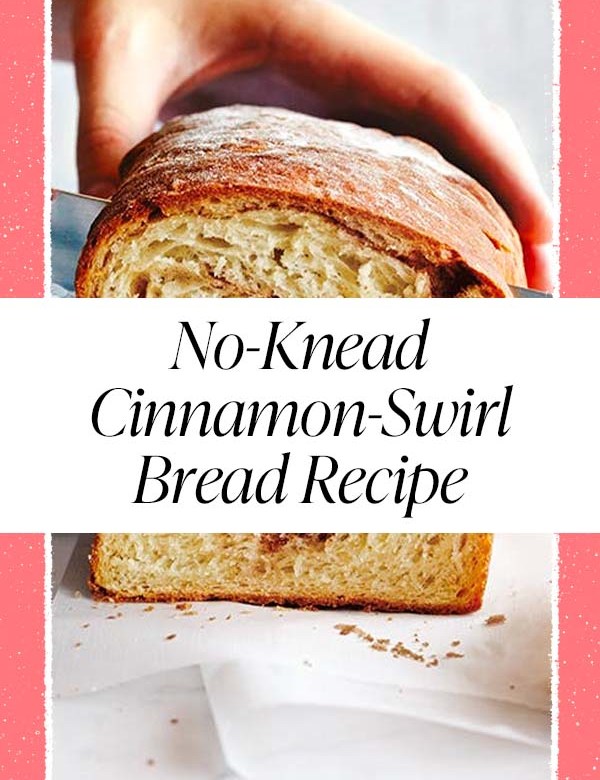 We relish the opportunity to slather softened butter onto a slice of warm, just-out-of-the-oven cinnamon-swirl bread…but the getting there is tough. Homemade bread? Not today—unless you’re talking about this no-knead cinnamon-swirl bread, courtesy of Alexandra Stafford (author of Bread Toast Crumbs and the food blog Alexandra Cooks). Yes, no knead: You read that right.

The process starts just like her ingenious peasant bread recipe, with a quick, yeast-based dough that requires almost no handling. The additional assemble couldn’t be simpler: Cinnamon sugar is tucked into the swirl of each loaf before a quick trip to the oven.

See? It’s basically already on its way to your mouth.

1. Make the Dough: In a large bowl, whisk together the flour, salt, sugar and instant yeast. In a medium bowl, combine the buttermilk, the boiling water and ½ cup water. Stir to combine, then add the flour, followed by the melted butter. Mix until the liquid is absorbed and the mixture forms a sticky dough ball. Cover the bowl with a damp tea towel or plastic wrap and set aside in a warm spot to rise until the dough has doubled in bulk, about 1½ hours.

2. Set a rack in the middle of the oven and preheat it to 375°F. Grease two 8.5-by-4.5-inch loaf pans generously with the softened butter. Using two forks, deflate the dough by releasing it from the sides of the bowl and pulling it toward the center. Rotate the bowl in quarter turns as you deflate, turning the mass into a rough ball.

3. Assemble the Bread: Dust a clean work surface with flour. Using your two forks and working them from the center out, separate the dough into two equal pieces. Use the forks to lift one portion of dough onto the clean surface. Using as much flour as necessary from the surface, dust your hands and the exterior of the dough, and shape the mass as best as you can into a ball. Repeat with the other half. Let the dough balls rest for 20 minutes without touching.

4. Dust another clean surface with flour. Transfer one round to the prepared surface and gently stretch the dough into a rough 10-by-15-inch rectangle. In a small bowl, mix the sugar with the cinnamon. Brush the dough with the egg wash. Sprinkle the dough with half of the cinnamon-sugar mix. Beginning with one short end, roll it tightly into a coil and place it in a greased loaf pan. Repeat with the remaining round. Do not cover the pans. Let the coils rise on the countertop near the oven (or another warm, draft-free spot) until the top of the dough just crowns the rim of the pans, about 10 minutes.

5. Transfer the pans to the oven and bake until the tops are golden brown and firm to the touch, 40 to 45 minutes. Remove the loaves from the oven, turn them out onto a cooling rack and cool on their sides for 20 minutes before slicing.