Need a Substitute for Butter? These 8 Options Will Work in a Pinch

They say “buttah is bettah,” and whoever they are, they’re right. It’s hard to rival the creamy, sweet, rich taste of butter, whether you’re whipping up a homemade pie crust or frying an egg. And while we try to keep our fridge stocked with the good stuff 24/7, sometimes we—gasp—run out. Other times, we’re cooking for someone who’s dairy-free or vegan. Is there a good substitute for butter? Yes, there are actually eight that we’d recommend.

But first, what is butter?

It sounds like a silly question, but…do you really know the answer? (No, we didn’t think so.) Butter is a cooking fat made from the solid parts of milk, fat and protein. You’re most likely to see butter made from cow’s milk, but it can be made from any mammal’s milk (like goat, sheep or buffalo). It’s made by churning liquid milk until the solids separate. Those solids are strained out, drained, kneaded and then pressed into a solid block.

The FDA requires that anything sold as butter must contain no less than 80 percent milk fat (the rest is mostly water with a little bit of protein). It has a low smoke point that makes it burn quickly in high-heat cooking methods; it can be stored at room temperature, in the fridge or in the freezer; and it clocks in at about 100 calories per tablespoon.

You’re probably usually buying and cooking with cow’s milk butter, but there are even more varieties within that category alone.

What kinds of butter are there?

Sweet cream butter. If you live in the United States, this is the butter you’re most likely buying at the grocery store. It is made from pasteurized cream (to kill any bacteria), has a mild buttery flavor and can be salted or unsalted.

Raw butter. Raw butter is similar to sweet cream butter, except the milk is raw, or unpasteurized. It has a super-short shelf life (about ten days in the fridge) and because of strict FDA regulation, can’t be sold across state lines.

Cultured butter. Cultured butter is made from milk that’s been fermented (like yogurt) before churning. It’s complex, tangy and a little bit tart, but it cooks just like regular butter. Before pasteurization and refrigeration existed, cultured butter was the only kind of butter; nowadays, store-bought butter is usually pasteurized and then re-inoculated with cultures to give it a tangy flavor.

European-style butter. You may have seen butter labeled “European-style” in the grocery aisle and wondered if it was just a marketing thing. It’s not: European-style butter, such as Plugrá, has more butterfat—at least 82 percent—than American butter. That means it has an even richer taste and texture. (It’s especially great for baking flaky pie crusts.) Most European butters are either naturally cultured or have cultures added for a hint of tang.

Clarified butter. Clarified butter is pure butterfat and nothing else. It’s made by simmering butter at a very low heat and skimming away the milk solids while the water evaporates. What’s left is a golden liquid that’s safe to store at room temperature and can be used in higher-heat cooking methods, just like oil.

Ghee. Ubiquitous in Indian cuisine, ghee is almost the same as clarified butter, with one key difference. It is simmered longer, until the milk solids actually start to brown, and then they’re skimmed off. It has a nuttier and toastier taste.

Spreadable or whipped butter. Ever tried to spread cold, hard butter on a soft piece of bread? Disaster. Many brands now sell “spreadable” or “whipped” butter that’s soft even at refrigeration temperatures, thanks to the addition of liquid fat (like vegetable oil) or air.

If you don’t have a stick of butter on hand or are choosing to cook without it, you can try one of these eight worthy substitutes, many of which you probably already have at home. Just make sure you choose your butter substitute based on what you’re making.

8 Ingredients You Can Substitute for Butter 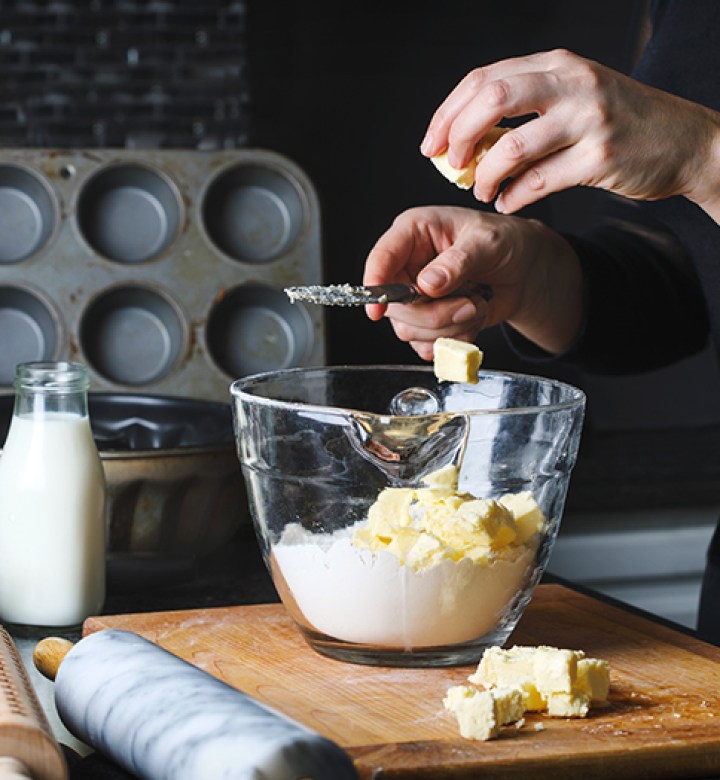 Best for: Anything! Coconut oil is a versatile butter substitute, but it shines in vegan desserts and sweet applications.

How to use it: Coconut oil can be substituted for butter in a 1-to-1 ratio. While it’s totally fine for cooking, it won’t behave the same as butter in baking. Cookies will be crunchier and pies will be more crumbly, but cakes, quick breads and muffins will be relatively unchanged. Use cold solid coconut oil for applications like pie crust, and liquid coconut oil in place of melted butter.

Tastes like: Because it’s made from vegetable oil, it pretty much has no taste.

Best for: Baking recipes that call for cold or room-temperature butter and deep frying. You won’t get the delicious flavor of butter, but it will behave in almost the same way.

How to use it: Substitute shortening for butter in a 1:1 ratio.

Tastes like: Butter…and we almost can’t believe it’s not. (Had to.) We like Miyoko’s, which is made from coconut oil and cashews instead of soy and cultured like European-style butter, but Earth Balance is also widely available.

Best for: Everything, but it’s admittedly not cheap. Use it when you’re baking something that wouldn’t be the same without butter.

How to use it: Plant-based baking sticks can replace butter in any recipe, baking or not, in a 1-to-1 ratio.

Tastes like: Depending on the type of olive oil, it can taste grassy, peppery, floral or slightly bitter.

Best for: Cooking. Because of its distinct flavor, olive oil isn’t ideal for baking unless it’s a recipe specifically developed to be made with olive oil. But it can be swapped for melted butter in a real pinch.

How to use it: Use olive oil for melted butter in a 1-to-1 ratio.

Best for: Baking recipes, specifically ones that call for one cup of butter or less. Otherwise, the yogurt will add too much moisture and result in a dense final product. We also recommend using the full-fat version whenever possible.

How to use it: Greek yogurt can replace butter in a 1-to-1 ratio up to one cup.

Tastes like: As long as it’s unsweetened or “no sugar added,” applesauce tastes neutral and is pretty much undetectable when used as a substitute for butter.

Best for: It can add replace butter in most baked cooks but since it’s not a fat, it won’t behave the same way as butter in cooking. Use it in cakes, cupcakes, muffins and quick breads.

How to use it: Applesauce can replace butter in a 1-to-1 ratio, but it might benefit from an additional fat like olive oil or yogurt for added moisture, and the end result might be denser than it would when using butter.

Tastes like: When not paired with the familiar pie spices, pumpkin actually has a squash-y, vegetal flavor.

Best for: It can replace butter in baked goods, especially strongly flavored ones, like cinnamon or chocolate. It’s a great substitute where the pumpkin flavor will enhance the recipe (like a spice cake).

Tastes like: We trust you know what an avocado tastes like: rich, creamy and a little grassy.

Best for: Avocado will yield a softer, chewier product, but it can substitute butter in most baked goods since it’s fairly neutral (and works best for cakes and quick breads). Remember, also, that it will turn things green.

How to use it: Ripe avocado can replace butter in a 1-to-1 ratio in baking recipes, but puree it first. Consider lowering the temperature of your oven by 25 percent and increasing the baking time to prevent your baked goods from browning too quickly.

Can You Freeze Butter? Baking 101