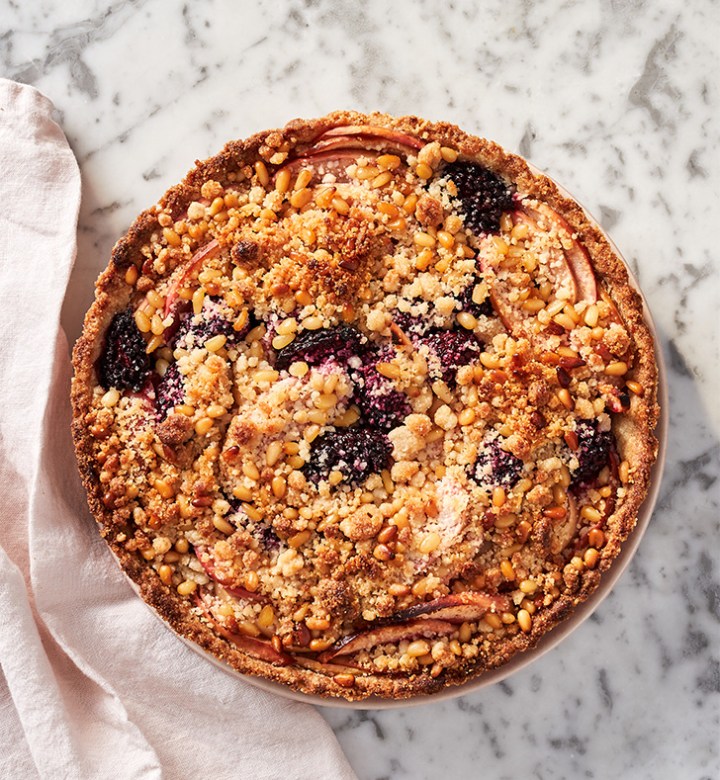 You might say Aran Goyoaga is something of an expert when it comes to gluten-free cooking and baking. So it’s no surprise that her apple blackberry crumble tart is a showstopper—not to mention gluten-free ﻿and ﻿vegan. (!)

“This is one of the easiest gluten-free and vegan tarts you can make,” the author of Cannelle et Vanille told us. “It’s so versatile—you can use any other fruit you have on hand. It’s great with frozen berries, sliced pears or peaches, and you can add other warming spices such as cardamom, nutmeg or orange zest.”

And if pie crust makes you nervous (same), rest assured that this one is practically foolproof. “The dough gets mixed in one bowl,” she continued, “and pressed into the tart pan with your fingers, so there’s no need to knead or roll—so simple.”

PureWow’s Chef in Residence program invites food influencers and tastemakers from all over the world to create new recipes in our New York City test kitchen.

1 or 2 tablespoons tapioca starch or cornstarch

1. Preheat the oven to 375°F. In a large bowl, toss together the brown rice flour, almond flour, brown sugar and salt. Add the coconut oil and work it into the flour using your fingertips until you have a dough that resembles coarse sand. The dough should clump up but feel slightly dry. Add 2 tablespoons ice water and mix it with your hands until it comes together into a loose dough.

2. Take approximately two-thirds of the dough and press it into a 9-inch tart mold, bringing it up around the edge. Mix the pine nuts into the remaining dough to make the crumble topping. Refrigerate both the tart crust and the crumble topping while preparing the filling.

3. In a large bowl, toss together the blackberries, sliced apples, lemon juice and zest, sugar, tapioca starch, vanilla and cinnamon. If the filling is very wet, add 1 more tablespoon of tapioca starch. Add the fruit filling to the tart mold and sprinkle with the crumble topping.

4. Bake until the crust is golden and the filling is bubbly, 45 to 50 minutes. Allow the tart to cool slightly before slicing.