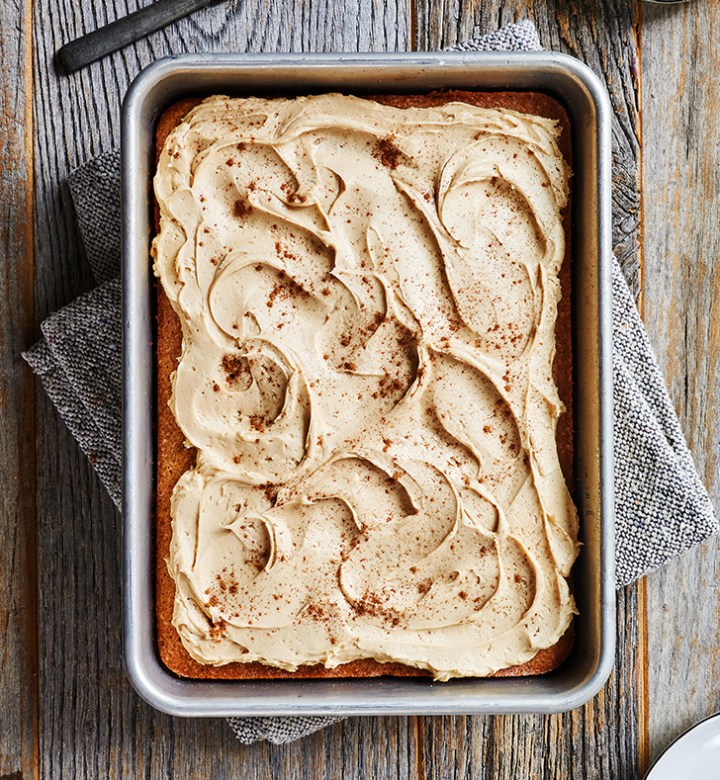 Is that fall we smell in the air? Maybe…but it’s also this no-fuss cinnamon sheet cake with cider frosting. When you need dessert and you need it fast, this recipe has your back. The cake is tender, moist and delicately spiced, while the flavorful apple cider icing is the crowning glory. Did we mention it’s almost impossible to mess up?

Psst: The frosting calls for boiled cider, which is basically just apple cider that’s been cooked down to a highly concentrated syrup. You can easily make your own (see the note after step nine), but it’s also available from specialty baking stores like King Arthur.

¼ cup boiled cider (to make your own, see the footnote)

3. Add the eggs one at a time, whisking thoroughly to combine before adding the next. Whisk in the vanilla.

4. In a medium bowl, whisk together the flour, cinnamon, baking powder, baking soda and salt.

5. Add the dry mixture to the wet mixture, stirring with a rubber spatula to combine. Mix in the buttermilk and scrape the side of the bowl well to ensure the batter has no dry spots.

6. Pour the batter into the pan and spread it into an even layer. Transfer to the oven and bake until a toothpick inserted into the center comes out clean, 30 to 35 minutes. Remove from the oven and cool completely.

7. Make the Cider Frosting: In the bowl of an electric mixer fitted with the paddle attachment, cream the butter and confectioners’ sugar on medium speed until light and fluffy, about 4 minutes. Scrape the bowl well, then add the vanilla, cinnamon and salt; mix to combine.

8. With the mixer running on medium speed, add the boiled cider in a slow, steady stream. Mix until well incorporated.

9. Spread the frosting on top of the cooled cake. Serve immediately, or keep covered for up to one day at room temperature.

Note: You can make your own cider syrup by reducing 1½ cups apple cider to ½ cup, then whisking in 3 tablespoons sugar and continuing to cook, stirring occasionally, until the mixture is reduced to ¼ cup. Cool 10 minutes before using.