‘The Real Housewives of New York’ Season 10 Episode 15: Every Tom, Dick and Brian 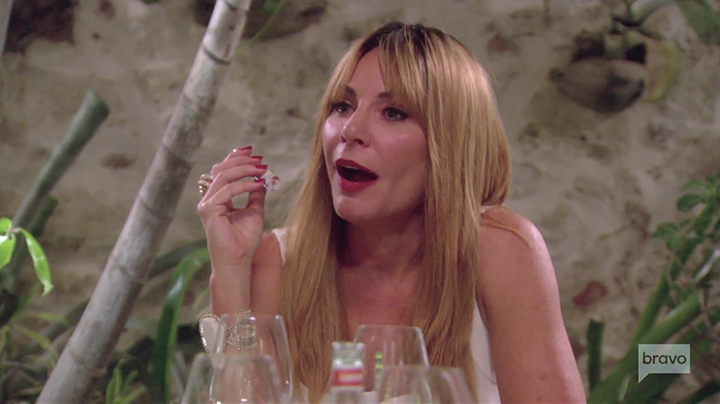 We’re in Carta, baby! Home of coffee, beer and cocaine—well, at least according to these women. It’s almost as if they’ve never watched an episode of Entourage (the coke tourism’s in Medellin, gals). Well, actually a man on a bicycle did offer me and my husband coca in Cartagena right smack when we were trying to get a great pic of a horse (should’ve been a sign that we did not in fact want any cocaine as we were promptly returning to the hotel to watch the Colombian version of Little People Big World).

But in all seriousness (and corruption aside), Cartagena from a tourism perspective is amazing. It’s right on the Caribbean; its people are warm and welcoming, the cuisine is delicious and infused with Cuban elements; and if you’re a beach person, you can probably rent your own private island for that perfect sand and clear water situation—the beaches on Cartagena proper are less tranquil, more rocky and packed to the brim.

If you’re staying the walled city—the colorful, flower-covered homes, cobblestone streets, the “New Orleans-meets-Cuba” vibes—you will not be able to look out onto your own private beach. Sure, you could see the ocean from the roof probably, but the traditional Housewives pool-to-patio-to-soft-sand-beach transition scenario is just not going to happen. So when Bethenny gets all bratty about the fact that their house doesn’t have that is kind of like saying “I’m upset the Plaza Hotel doesn’t overlook the Statue of Liberty.”

Ugh. Right. Bethenny. “Bononos!” That means “Let’s go!” in Spanish according to Ramona. Let’s talk Queen B. Bethenny’s trip gets off on the wrong foot because Ramona tried to poison her. Not only doesn’t she have the courtesy to tell Bethenny she’s about to eat fish soup, but Ramona also asks her, “How does it taste?” like any good Bond villain would. Bethenny has an allergic reaction that none of the women cares about, and this sets the course for Bethenny’s regression. All this Skinny Girl wants is some love and attention. She wants a little mothering; she wants her friends to dote on her like her paid employees and say things like “Yes” and “Haha” and “Where’s my overtime?”That’s why she acts out on Carole, and that’s why she reverts to the tears and the custody and the restraining order. Of course all of those things are stressful and probably really scary, but this time it feels like Bethenny picked those specific darts out of her fanny pack to throw at the wall—history tells her they will actually stick.

And she had me on her side up until she told Carole that she was being smug about winning the consolation prize of the red-scarfed man, Brian. Up until that point, Bethenny was quiet about the fact that red-scarfed Brian had been relentlessly texting her. It would make sense for Bethenny to tell Carole about her legitimate concerns in private. After all, he’s just like Tom (and Harry! And probably some guy named Dick), orbiting this circle of women to get on the show. But, Carole was being smug, and Bethenny just couldn’t hold it in.

To add fuel to the fire, Carole was dressed ridiculously in some Beyoncé hand-me-down. It’s one thing to have the ridiculously dressed person on your team, but it’s a totally different thing to be fighting with the ridiculouslydressed person. Bethenny knows Carole’s shortcomings all too well and is using them against her, and Carole is just like, nah, bro. And so Bethenny reacts more. And they ignore her like Ramona stuck in a glass elevator. And then Bethenny tries to pull the “I need to be alone!” ticket in order to get even more attention, but now the women are responding to Bethenny’s tantrum like they are to Ramona’s wheelchair: She’s being a pain in the ass. And let me remind you: This all happens because of a man named Brian who looks like Adrian Brody if he never got out of that house in The Pianist.

Bethenny gets least valuable player this round. Luann, however, earns MVP by showing up to dinner in a wig, calling the roses from Scott “funeral décor,” smoking a vape pen at dinner like it’s 2009 and reflecting on the bad decision to run off with a gay man to Ibiza as if she’s the village’s wise elder teaching the younger generation. Also, points for Tinsley for just being normal and fun! I’d stay in your Cartagena house, Tinsley.