Royal fans woke up to a fun surprise Sunday when they found Prince William and Princess Charlotte had made a brand-new video together.

The Duke of Cambridge, 40, posted the Instagram video to the joint account he shares with wife, Kate Middleton, also 40.

In the short clip, we get a glimpse of William and his only daughter, Princess Charlotte, 7, cuddled up and delivering a special message to the Lionesses, England’s national women’s football team, who faced off against Germany in the finals.

In the video, William says, "We both want to wish the Lionesses the best of luck for tonight. You've done amazingly well in the competition and we're rooting for you all the way."

A very grown-up-looking Charlotte then chimes in, "Good luck. I hope you win. Bye." Oh, and she then gives her signature Charlotte wave. NBD.

This message—while surprising because we get a glimpse of the young royal—shouldn't be too much of a shock for those who have been following the duke's social media accounts closely. William has posted several times with personal messages for the Lionesses in the lead-up to the final.

How did we know the messages were "personal" ones from the duke and not just written by his social media handlers? Because they featured his unique signature, of course.

William and Charlotte's interest in the sport has been public knowledge for quite some time. After all, he is President of the Football Association (FA) in England. He’s held the position, which was previously filled by his late grandfather, Prince Philip, ﻿since 2006. And when the duke visited with the Lionesses back in June, they gifted him three football shirts with his children’s names on the back. When he saw Charlotte’s, he mentioned that she’s a “budding star for the future,” saying she wanted him to tell the team that she’s a good goalie.

But eagle-eye royal fans probably also noticed a nod to Charlotte's mother, Kate, in the new video. The middle Cambridge is seen wearing a polka dot outfit that very much resembles the one Middleton wore to Wimbledon this year. 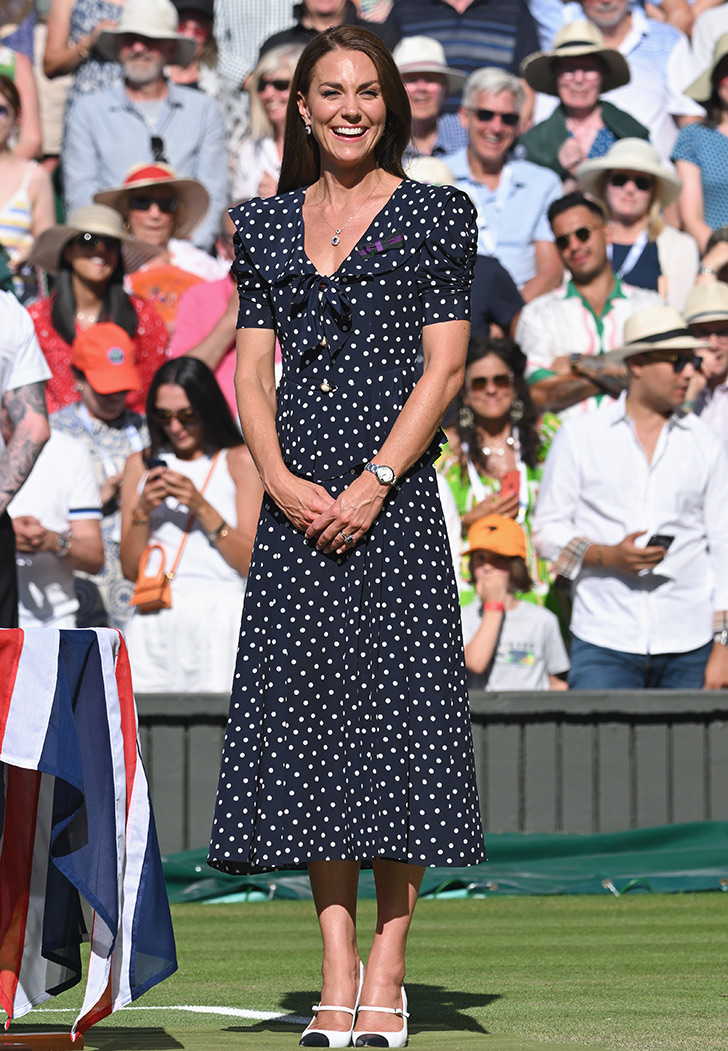 In fact, the Duchess of Cambridge has worn polka dots a whopping eleven times in recent memory, making it clear the pattern is a favorite of hers. Charlotte clearly shares an affinity for polka dot fashion.

What a treat to see Charlotte following in William and Kate's footsteps in the same day.

Prince William Shares Moving Message of Support for U.K. Soccer Player Who Came Out as Gay