2 U.S. Gymnasts Just Made History at the National Championships & May Be Headed for the Olympics Again

Two familiar faces just made history at the 2022 USA Gymnastics National Championships, and we might be seeing them headed to the 2024 Paris Olympics as well.

Jordan Chiles, 21, and Jade Carey, 22, who both competed in the 2020 Tokyo Olympics as a part of the U.S. women's gymnastics team, each made their return at this summer's National Championships. And while this may seem unsurprising, considering both just competed last summer in the Olympics, the two actually made history as the first U.S. Olympic female gymnasts to follow a season of NCAA college gymnastics with a return to elite competition, as noted by NBC Sports.

While many gymnasts retire from Olympic competition once they begin competing at the college level, this move signals that Carey and Chiles aren't ready to give up on an Olympic return just yet. 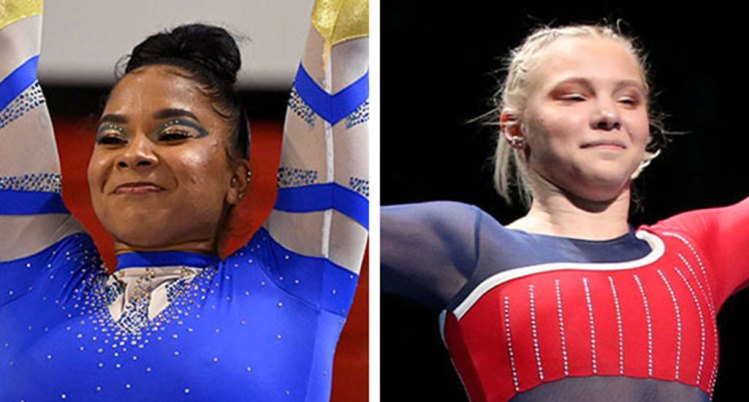 Both Chiles and Carey saw success at the 2020 Games. Carey ended up taking home the gold medal for the individual floor exercise, while Chiles took home a silver as a part of the team event (of which Carey did not take part).

The two young gymnasts recently took part in the Gold Over America tour as well, where they joined their former Olympic teammates Simone Biles, Grace McCallum and MyKayla Skinner, along with other notable gymnasts.

In an interview with Olympics.com, Chiles showed her excitement at returning to the national stage. “Making my return is honestly the most amazing thing,” she said. “I'm here for myself. I just want to be able just to go out there and have fun.”

Carey echoed the excitement to return, and she said she has her eyes on the 2024 Paris Olympics. “I want to make it back [to the Olympics] again and do even better,” she said.

Good luck, ladies! We'll be cheering you both on.

Simone Biles Corrects Stranger Who Asks Why She 'Quit' Gymnastics