First, the 28-year-old pilot went to see Hannah Ann in Knoxville, Tennessee. Not only did Weber (sorta) impress her stern dad, but he also gave Hannah Ann a letter detailing all the things he “loves” about her. Although it was in response to the mushy note Hannah Ann gave him in episode seven, Weber hasn’t used the “L” word with any other contestants (at least not yet).

Next, Weber traveled to Des Moines, Iowa, where he schmoozed Kelsey’s parents. Yes, her family was hesitant about Kelsey’s dedication to Weber, who is dating more than one person. Still, they can tell Kelsey is in love, so that counts for something…right?

Madison wasn’t so lucky in the parental department. Although they liked Weber, they were concerned about Madison’s beliefs, since she’s saving herself for marriage and hasn’t told Weber yet. (#Whoops)

Last but not least, Weber met up with Victoria F., who was screwed over by the producers for the second time. (More on this later.) It all started when the pilot traveled to Virginia Beach, where Victoria F. recreated their first one-on-one date…but with Hunter Hayes instead of Chase Rice.

Suddenly, an ex-girlfriend named Merissa surprised Weber with a bombshell about Victoria F., claiming he needs to “be careful.” This prompted the pilot to confront Victoria F. right before meeting her parents.

The problem? Weber didn’t get to meet Victoria F.’s family because the news was too much for her to handle. In fact, Victoria F. stormed off and refused to communicate with Weber, who drove off in a state of confusion.

At the rose ceremony, Weber surprised everyone by giving Victoria F. a rose, ultimately sending home Kelsey. The pilot’s decision left us with one burning question: Is Weber purposely defying the producers, who are making it really difficult for him to pursue Victoria F.? 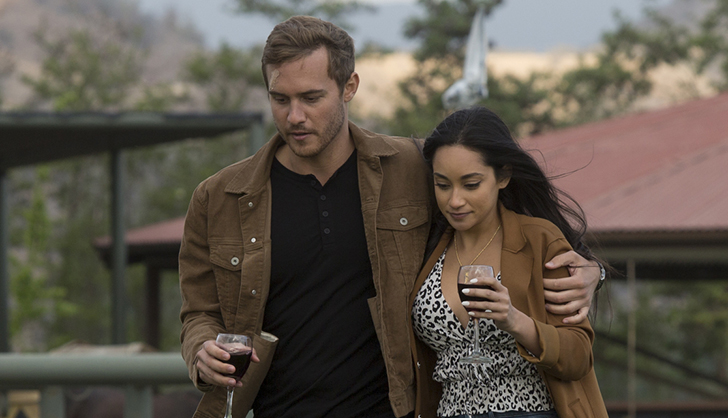 This is the second time The Bachelor team has introduced an ex-fling into the mix this season. Yes, Weber’s run-in with Merissa didn’t seem as staged as the Chase Rice drama, but we highly doubt the producers didn’t orchestrate it. (The cameras were ready, after all.)

To top it off, Victoria is famous for storming off when she doesn’t know what to say. So, we wouldn’t be surprised if the producers purposely invited Merissa on the show knowing that Victoria F. would cause a scene. And that’s exactly what she did.

Not only did Victoria F. walk away from Weber, but she also refused to talk about the accusations. “I am so done with this conversation right now,” she said.

If you’re thinking, Why’d the producers do it? Our best guess is that they know Victoria F. has seriously struggled with the pressure of being on The Bachelor. Similar to when they blindsided her by bringing her ex Rice on the show, they again attempted to expose her weaknesses—but Weber didn’t fall for it. If anything, he defied their attempt to send Victoria F. home, and we’re all for it.

So, will Victoria F. survive another week? While it’s highly unlikely, anything is possible when it comes to season 24. The Bachelor returns to ABC next Monday, February 24, at 8 p.m.

Is ‘Bachelor’ Star Peter Weber Engaged? It Kinda Sounds Like It