No offense, 20s, but we are so over you. In fact, turning 30 feels awesome. It’s a milestone that deserves to be celebrated. Still, celebrations in the age of COVID-19 are, well, a tad complicated (plus, now that you’re approaching the big 3-0, a bar crawl just isn’t going to cut it, anyway). You need a party that honors the sophisticated woman you’ve become and adheres to the current public health and safety guidelines but is, you know, still fun. That’s why we’ve rounded up thirty 30th birthday ideas that fit the bill, whether you’re comfortable with in-person gatherings right now or would prefer to celebrate virtually.

20 Movies Every Woman Should Watch in Her 30s

A Few Things Before We Start

﻿﻿As previously mentioned, things are complicated right now (thanks, Omicron). While the CDC doesn’t provide specific guidelines for celebratory gatherings, they did release the following advice before the 2021 holiday season: “The best way to minimize COVID risk and ensure that people can safely gather is to get vaccinated or get the booster if you’re eligible.” And when it comes to big family gatherings, the CDC also suggests “additional precautions” such as testing in advance and avoiding crowded indoor spaces. They also recommend that people continue to wear masks indoors in public spaces. (Psst: Here’s where to buy N95 and KN95 masks online right now.)

In other words, if you are going to celebrate your 30th birthday in-person with a group of friends or family, you’ll want to make sure that you’re following the above health and safety precautions. 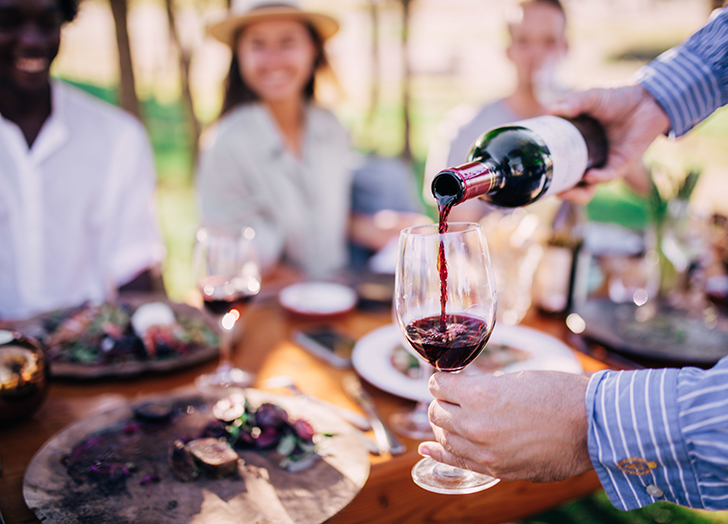 1. Do a Virtual Wine Tasting

A weekend in Napa with your nearest and dearest would be a pretty sweet way to usher in your 30s. But if you want to make it a risk-free affair (and save on airfare), you can have a similar experience without even packing a suitcase. Sign up for a virtual wine tasting—solo or with a group of your closest pals—and celebrate with some swirling and sipping at home instead. There are plenty of great options to choose from, but we’re fans of this one from wine.com (it’s free!) and this highly-customizable pick from Priority Wine Pass.

Craft beer more your vibe? Head to a local brewery for an afternoon of tasting, learning and (hopefully) some good eating. Do your research before pulling together your guest list—many taprooms offer outdoor tastings and are dog- and child-friendly, with some even offering live music.

Dinner parties are great and all, but they can be a lot of work. An easier but just as elegant option? A stress-free brunch consisting of a mimosa bar, a selection of bagels and spreads, and an array of delicious pastries. Since everything can be prepped in advance (including the killer playlist), all you need to do once guests arrive is enjoy the party.

There’s nothing like being locked in a room alongside your best friends with just 60 minutes to escape. Seriously, it’s a great bonding experience. The classic escape room is always a good time, but we’re also fans of a themed experience (like a Downton Abbey escape room or a royal affair). And now, you can even enjoy the thrill of escape rooms virtually.

Just because you’re getting older doesn’t mean you can’t get your thrills at an amusement park. Call ahead to inquire about group rate discounts or party options. And remember to budget for the group photo—you’re going to want to remember this one. 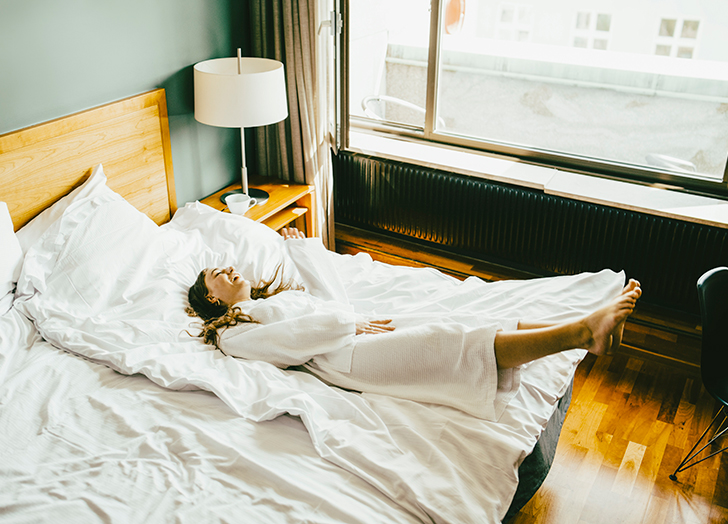 6. Spend the Night in a Hotel with Your Best Friends

These days, it can be hard to nail down a weekend where everybody is free (Jenny can’t get a sitter and Megan has a wedding to go to). But a one-night staycation is way less of a commitment and often even more fun. Book a suite at a fancy hotel, order room service, do face masks and lounge around in the complimentary bathrobes with glasses of bubbly in hand.

7. Sing Your Heart Out at Karaoke

You can reserve a private room at a karaoke bar or host a small shindig at your pad. The important thing is to keep the drinks flowing and let her rip. And here are the best karaoke songs to get the party started.

8. Have a Virtual Paint Night Party

Get in touch with your inner Picasso at a virtual paint-and-sip class that your friends can join remotely. Yes, three glasses of Chardonnay will help those creative juices flow. Feel the stress of the past decade (specifically, the past year) melt away as you blend paints and mix shades to create your masterpiece.

Invite some friends over, blast some tunes, bring out the Chianti and make your own ’za. Once you have the dough ready (homemade or store-bought), go wild with the toppings. It’s your birthday, so no one is allowed to judge if pineapple and prosciutto is your thing.

If you’re opting for a Zoom birthday party this year, a scavenger hunt is an ideal activity to keep everyone engaged—just be sure to make it tough, lest it feel like child’s play. 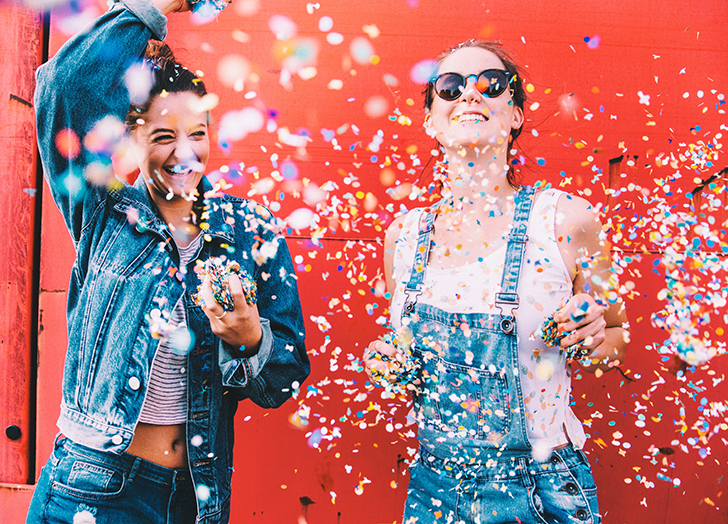 The options are endless, but here are some ideas to get you started: A Great Gatsby party (complete with Prohibition-style cocktails and retro costumes), a movie party (everyone has to come dressed as their favorite character) or a Night in Paris soirée (keep the Champagne flowing and serve éclairs or macarons for dessert).

It’s pasta, passion and pistols at this dinner party with a twist that will keep all guests on their toes. Whether you host your own (you can get a murder mystery kit here) or make reservations for a professional party, this whodunnit evening will be one that your friends will talk about for years to come.

If a murder mystery sounds a tad too hair-raising for you, try something a little tamer. Bring out the board games (we’re partial to retro picks like Chutes and Ladders or The Game of Life) and play the night away. The winner gets the biggest slice of birthday cake.

14. Book a Private Room at a Restaurant

Give yourself the gift of someone else doing the cooking (and the cleaning). A delicious meal in an intimate setting with your closest friends or just your S.O.? Birthday wishes really do come true.

15. Or Take a Cooking Class

You’ve always wanted to know how to roll sushi or bake homemade bread. Grab some pals and learn how to whip up your favorite foods before sitting down to enjoy the fruits of your labor. You can either find an at-home chef to come to you, head to a local culinary institute or pick from one of the many virtual cooking classes available. 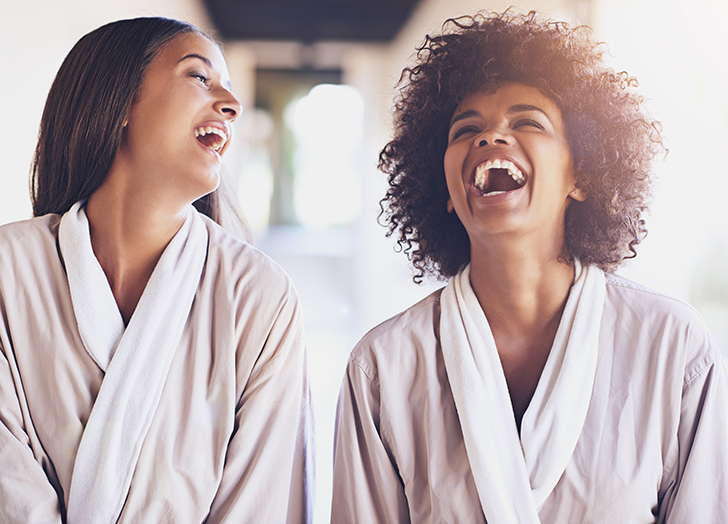 16. Treat Yourself to a Spa Weekend

You made it through your 20s in one piece—you deserve some pampering. Want something luxurious and intimate? Check out the in-house spa at the fancy hotel downtown, or hire a professional who will come to you. Whatever you go for, remember that a deep-tissue massage is an absolute must.

Now that you’re older and wiser, you know that the best way to enjoy Mother Nature is to do it in style. And with proper toilets and showers. Research glamping sites near you that offer posh digs and upscale amenities (but still have plenty of s’mores).

Spend the day lounging at home watching movies, munching on popcorn and catching up on the latest must-see flicks. You could keep things interesting by shaking up the genre, but since it’s your birthday, no one’s allowed to complain if you want a rom-com double bill.

Remember when you used to have these at school? They were fun then, and yep, they’re still fun now (they’re also a great option for those who aren’t comfortable with indoor hangouts just yet). Think tug-of-war, long jump, three-legged race and many more games that will have your crew rolling around with laughter.

Who needs Vegas when you can bring the blackjack to you? For a really special evening, hire a card dealer and bet for cash (we’re talking pennies here—not, you know, Benjamins). 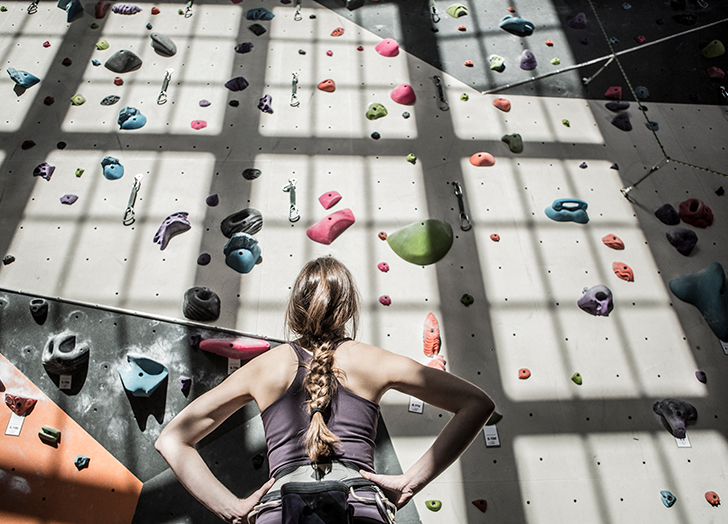 We don’t mean going for a jog around the park with your bestie (although you can, if you want to). To ring in a new decade, challenge yourself to do something a little…out-there. Think aerial yoga, rock climbing or indoor skydiving.

Or opt for a group activity that’s a little less intense (but still fun). Get some pitchers of beer, split into teams and see who can get the most strikes.

Discover your city’s art scene with a group of friends and see if you can find a piece to bring home in order to commemorate the occasion. (Psst: A lot of galleries offer one night each month of special viewings and free drinks, so do your research beforehand.)

24. Check Out a Sports Event

Whatever the season, there’s a game on. Whether you head down to the ice-skating rink, baseball field or college campus, enjoy the thrill of cheering on the home team. (Hint: A good game is even fun to watch with a couple of close friends on the couch, provided there’s plenty of snacks and cold beer on the menu.)

It doesn’t matter how many candles are on there, birthday cakes never get old. Instead of gifts, ask your friends to come over with a cake (homemade or store-bought) and enjoy sampling them all. Up the ante by crowning one baked good as the winner. 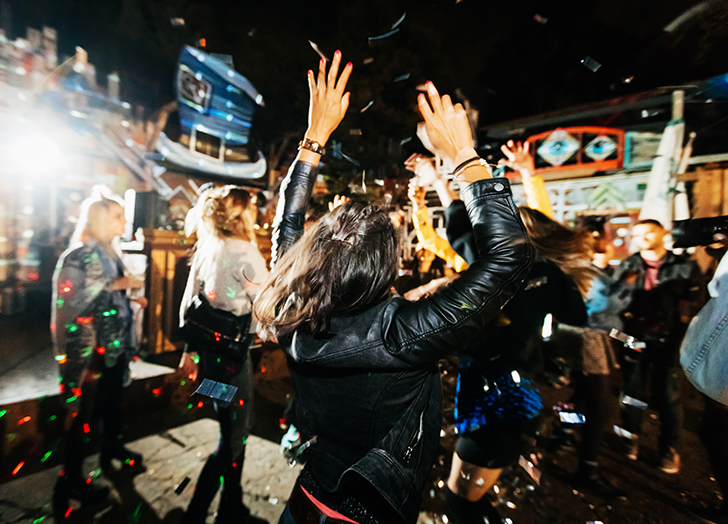 Maybe you don’t want to stay out quite as late as you used to, but that doesn’t mean you can’t boogie down on the dance floor. Prefer to skip the crowds but still want to get wild? Go to a group dance class with your friends, or sign up for a virtual class with your peeps instead.

Bar crawling was so 24-year-old you. Now that you’re entering your fourth decade, the idea of knocking back six drinks in three hours just doesn’t have the same appeal. Trying different cupcakes, on the other hand, well, that sounds delightful. (Pro tip: Buddy up so that you can split a cupcake at each place.)

28. Have an Afternoon Tea Party

Want something a little more sophisticated than just cupcakes? How about tiny sandwiches, crumpets and tea? That’s way more civilized (and still delicious).

It sounds, well, kind of crazy, but it’s oddly therapeutic. It’s also pretty popular these days, which means you shouldn’t have any trouble finding an ax-throwing location near you.

Round up your most competitive friends and head to a trivia night (lots of bars and restaurants have them) or host your own. Go for a general knowledge game or tap into your niche for an event where you can really shine (hello, Seinfeld-themed trivia).Who’s going to have the best 30th birthday ever? Answer: You.

21 Lightweight Comforters That Are Perfect for Hot Sleepers

This Body Pillow Is Taller Than Me, But It's One of the Coolest Things I Own