Once You Taste Graza’s Premium Olive Oil, You’ll Never Go Back to the Supermarket Stuff Again

Just because you buy extra-virgin olive oil at the supermarket doesn’t mean it’s high quality. In fact, it doesn’t even mean that the oil is fresh. On the flip side, many high-end olive oils on the market will cost you an arm and a leg, so much so that you’ll be hesitant to use more than one modest dribble at a time. Luckily, there’s a delicious compromise that aims to give home cooks the best of both worlds. Meet Graza, a budding olive oil company that prides itself in creating pure, single-origin oils at a more affordable price point than its competitors. We were skeptical at first, but after sampling the line, we were so impressed with its quality that we had to tell you all about it.

Brightland Vinegar Had a 1,000-Person Waitlist, So We *Had* to Try Their New Garlic-Infused Olive Oil 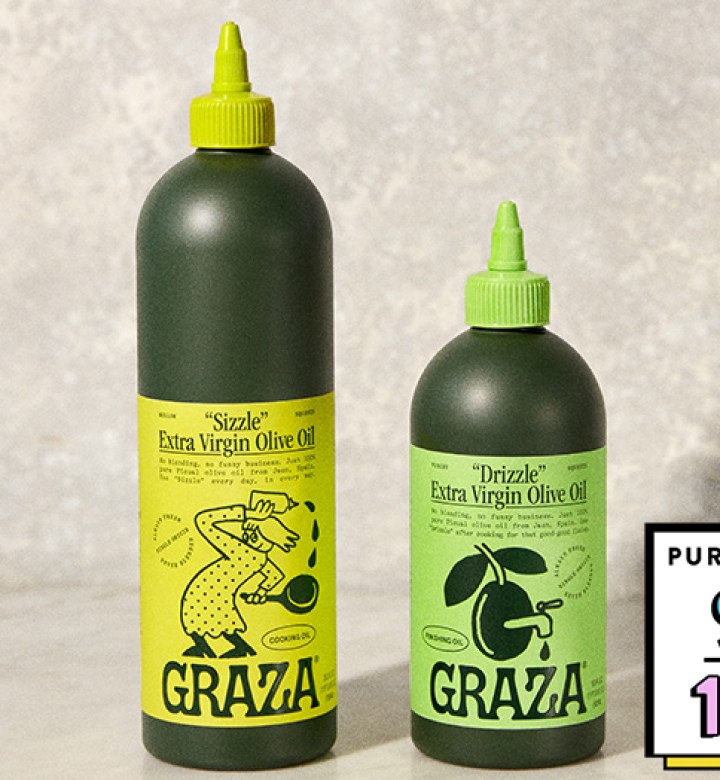 First, a little background: Launched in January, Graza creates nutrient-dense, fresh-never-blended olive oils that come in a handy squeeze bottle (which looks damn good on the kitchen counter, if we do say so ourselves). Currently, there are two varieties to try: Drizzle, a unique finishing oil that’s meant to be consumed straight from the bottle, and Sizzle, an all-purpose cooking oil.

Graza was the result of cofounder Andrew Benin’s three-year stint in Andalusia, Spain, but it didn’t take nearly as long for him to observe the importance of olive oil in the region. “Olive oil is the glue to everything, and that was just from watching my wife’s mom cook.”

After driving through the Sierra de Cádiz and visiting a slew of olive oil co-ops, Benin learned that many of their oils were so fresh that they were impossible to export. Unfiltered and made from unstable olive varietals, they couldn’t withstand a trip overseas. The suppliers he spoke to urged him to go to Jaén, where more than half the world’s olive oil is produced. There and in all of Andalusia, the Picual olive reigns. Robust in taste and essentially exclusive to the region, Graza’s olives are harvested in Sierra de Cazorla. The entire production process, from picking to bottling, happens in one place, and the olives are pressed no more than six hours after being harvested.

If you’re only familiar with supermarket olive oil, Graza’s unique offerings are probably unlike any you’ve ever had. “Picual is powerful in flavor,” Benin explains. “A preconditioning of people to neutral oils, I’m kind of against—like, your food should taste like stuff.”

Not only does pure Picual olive oil taste better than the old, cheap blends we’re used to (Benin warns that oil labeled “Mediterranean blend” or one made from olives from multiple countries usually reflects poor quality, as the brand likely got the cheapest oils available from multiple producers), but they’re also bursting with beneficial polyphenols and antioxidants. They have the longest shelf-life of any varietal out there, as well as the highest smoke point. 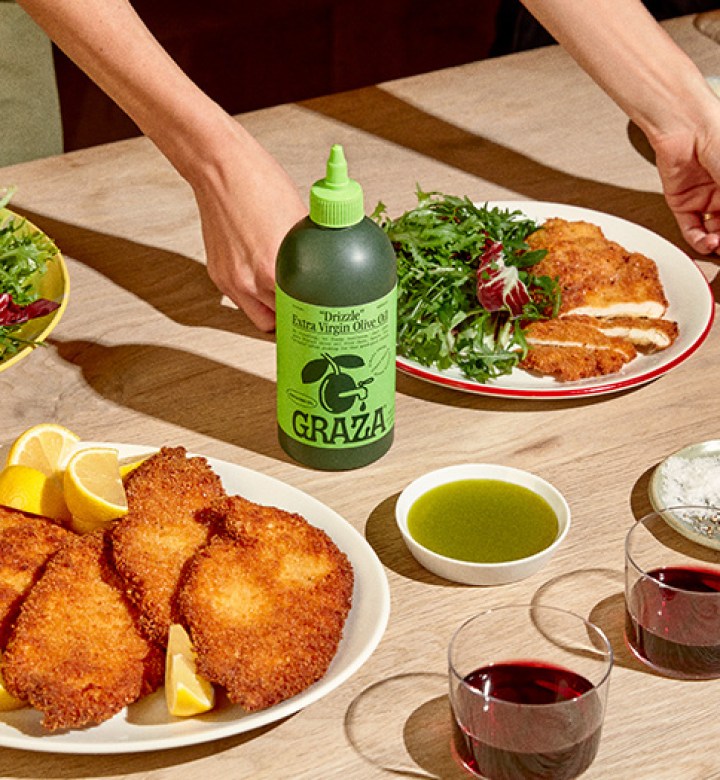 One standout feature of the line is its squeeze-bottle packaging. “I think it enables people to be as liberal and controlled as they want,” he explains. “If you get a fancy chef’s knife, you’re kind of intimidated if you’re not a good cook…but with a squeeze bottle, you kind of know exactly what to do with it. And it’s just more functional…I think it detracts from that feeling of like, ‘someone got me a nice bottle of olive oil, I’m not gonna use it,’ because if I pour out too much that’s like, $5.”

In terms of price, Graza’s oils are a bit more expensive than the average, but if you ask us, they’re worth every penny, since they’re much higher quality without being too much of a splurge.

If you want to save a few extra bucks, make your purchase a subscription and save at least 10 percent on your monthly haul. We’d suggest the duo pack of both Drizzle and Sizzle for all your EVOO needs, but in case you want to start with just one, read on for details on each oil. 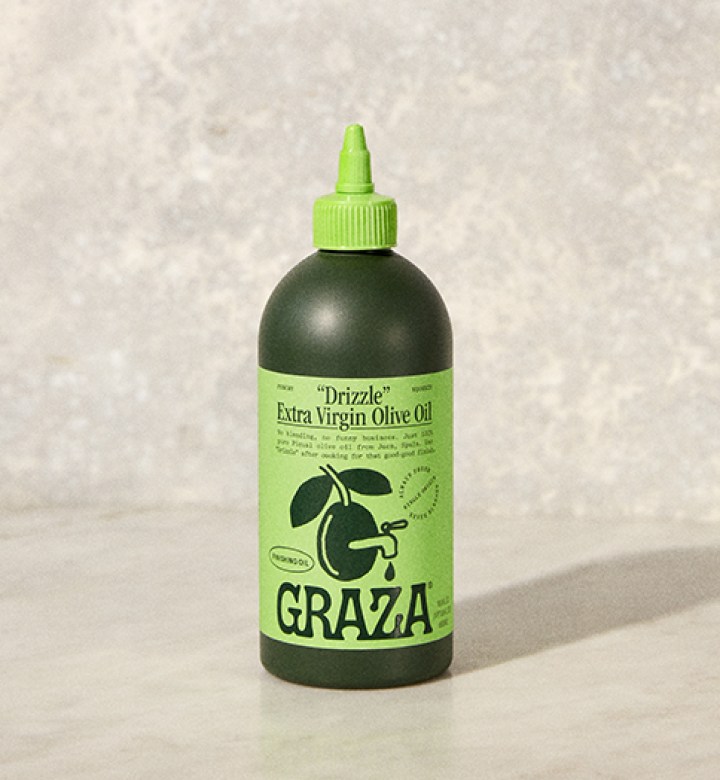 This vibrant (seriously—it’s neon green, thanks to higher levels of chlorophyll retained during pressing) oil is made from young olives that are harvested during the first week of October. These produce an uber flavorful oil that’s teeming with antioxidants and polyphenols. Peppery, vegetal and just spicy enough, Drizzle is best consumed raw (you could heat it, but Benin says “it’d be a waste to cook with it”). Think salad dressings, avocado toast, pastas, charcuterie boards, sandwiches, popcorn—that sort of thing. Because it’s made from underripe olives, it takes a ton of them to fill the bottle (about 5,000 to be exact), hence the higher price for a smaller amount. But because you’ll be using it for dipping and finishing instead of cooking, it’ll likely last you just as long as a bottle of Sizzle. 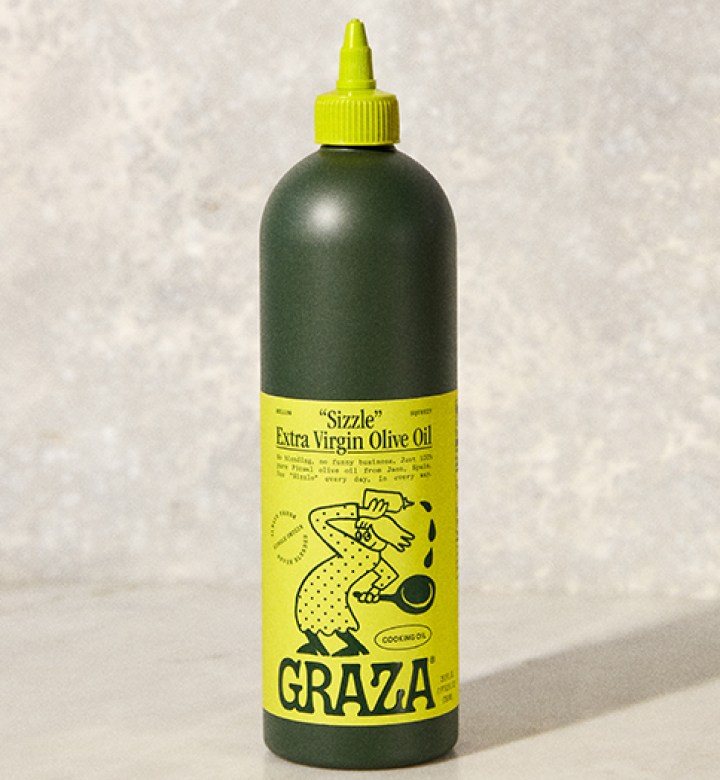 Made from more mature olives picked at peak season in December (when they begin to morph from green to purple and are packed with oil), Sizzle is about to become your go-to cooking oil. Its flavor is more muted, and the oil is mellow, delicate, soft and ever so slightly sweet in flavor. It can hold its own against high levels of heat, so you can use it for searing, roasting, sautéing and frying. We’re talking stovetop salmon, roasted vegetables, skillet steak or even crispy schnitzel.

Avocado Oil vs. Olive Oil Which One Is Healthier (and Which Should I Cooke With)?