When it comes to chocolate cake, there is a gold standard: the Trunchbull’s 18-inch-wide, ganache-topped wonder from Matilda. It’s dense, fudgy—the stuff of wonders—at least as it was depicted in the 1996 film. Given how it’s endured as the pinnacle of chocolatey cake perfection for 26 years now, I wanted to know: Could a box mix ever come close to the storied confection?

In the name of science, I baked nearly two dozen cakes, going through roughly five dozen eggs and a half-gallon of vegetable oil, testing several popular chocolate cake mixes to uncover the best grocery stores had to offer.

Our Picks at a Glance: 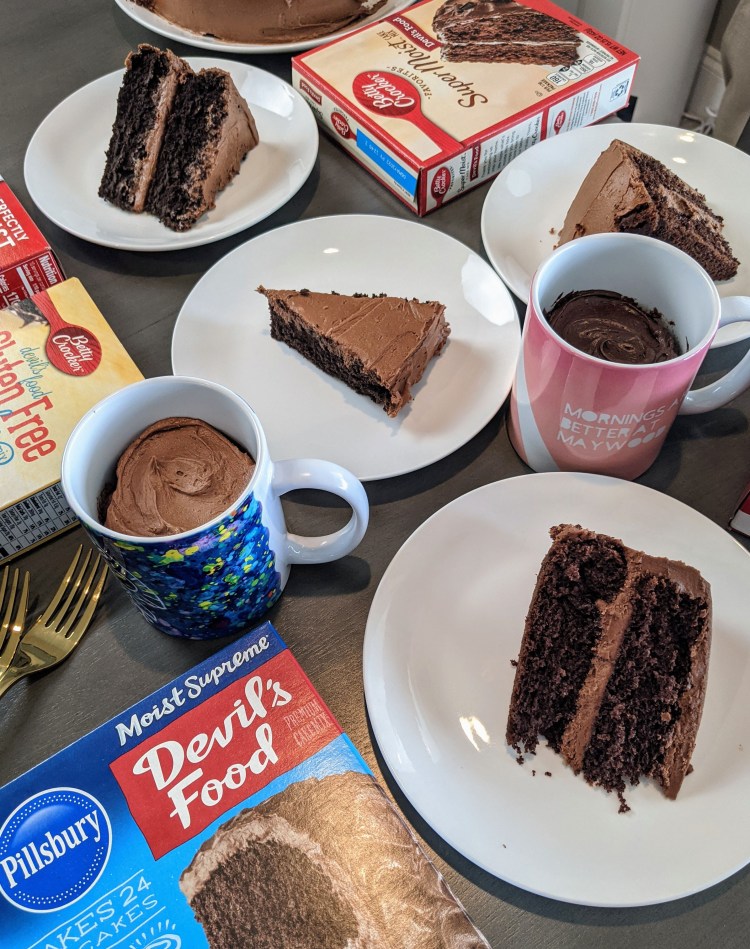 How We Tested Cake Mixes:

Each cake was baked according to its package instructions, checking for doneness at the lower end of the baking time frame. (If it was set in the middle and springy to the touch, it was taken out to cool.) Once cooled, all cakes were frosted in the same chocolate buttercream, unless it was a mug cake that came with its own frosting packet (or had to be frosting-free, for the keto options). From there, slices were given to at least three people, where they were instructed to eat a few bites with frosting and without, savoring just the cake itself, and ranking it overall on its flavor, texture and chocolaty-ness. Those scores were averaged, resulting in the reviews you see below.

The 10 Best Brownie Mixes for Every Type of Sweet Tooth 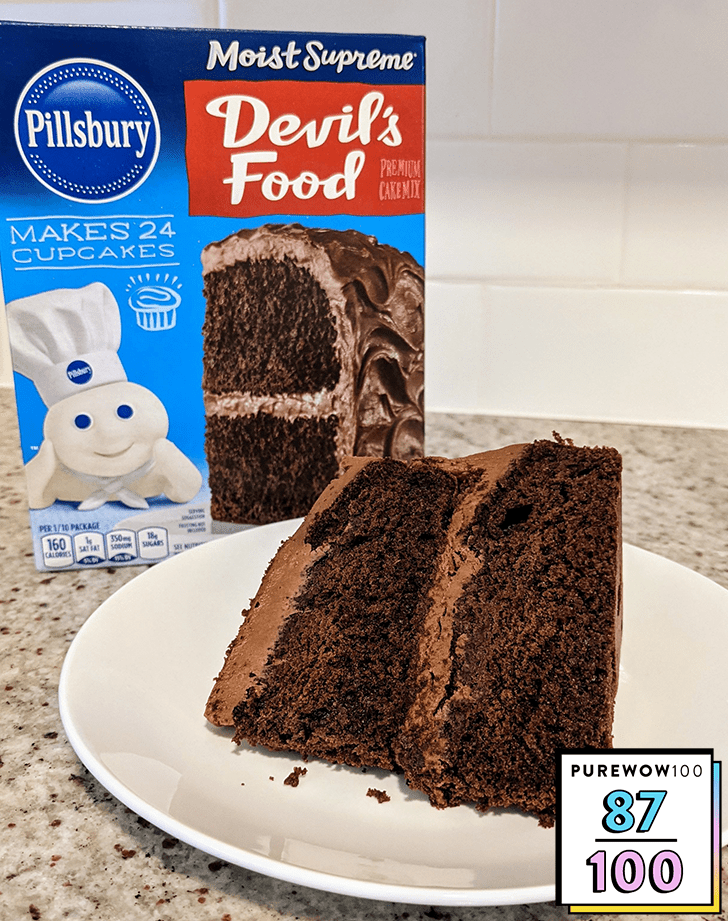 The Dough Boy knows what’s up. A classic devil’s food cake is dark in color and dense in texture—the ideal foil to an angel’s food cake—and this box mix delivers without weighing you down. The texture is more springy than spongy, and the overall flavor is a bit milder, making it a great vehicle for truly decadent frosting. 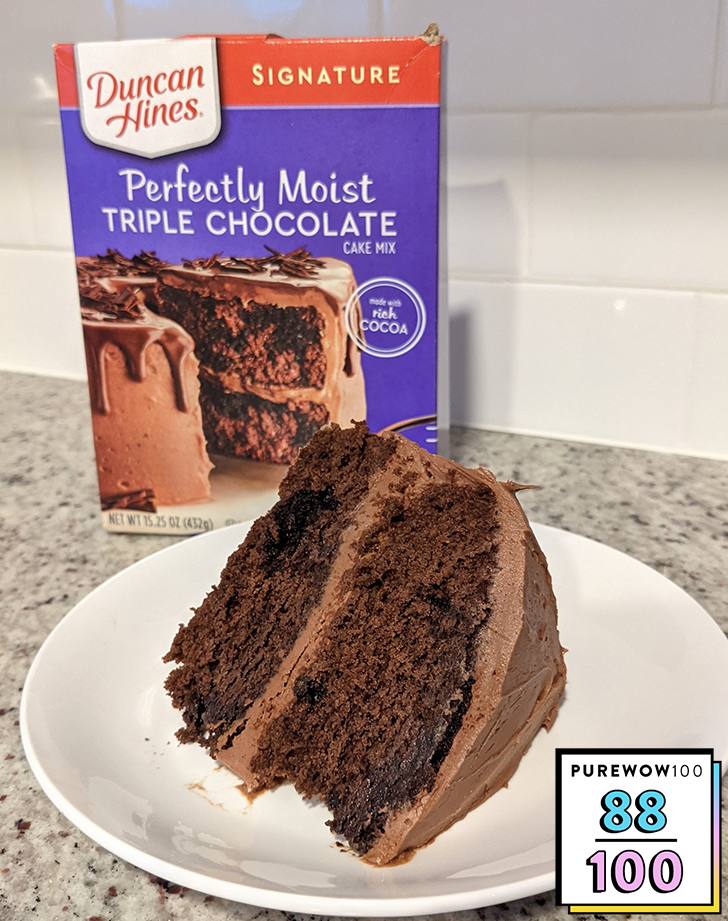 You wouldn’t think of heading to Big Lots for a decadent chocolate cake, but this mix is regularly stocked at the discount chain, and it’s worth a visit just to stock up. It requires just a tiny bit more effort—you have to swirl in a cocoa pouch and add mini chocolate chips to the batter—creating fudgy ribbons within the cake that give it dimension. In fact, you may feel borderline gourmand at the end, especially if you top it off with chocolate curls and a ganache drizzle, as it’s pictured on the box. (We didn’t go that far, but we support it 100 percent.) 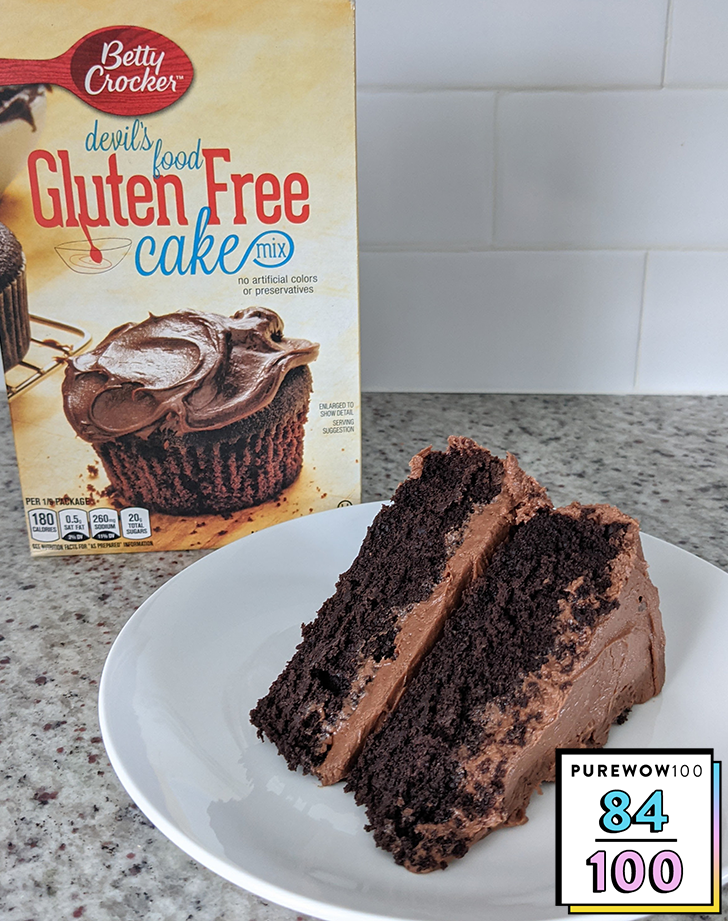 Just because you’re gluten sensitive doesn’t mean you have to be limited to one kind of chocolate cake. There are plenty of options out there, but in the devil’s food cake realm, we acknowledge only one: Betty Crocker. It’s available in many grocery stores (and we spotted it at Target), making this an accessible option that’s also easy to whip up. You’ll need two boxes to bake a layer cake, and it calls for a stick of butter in place of oil, but the extra costs are worth it. It’s moist, decadent and loaded with dark chocolate flavor. 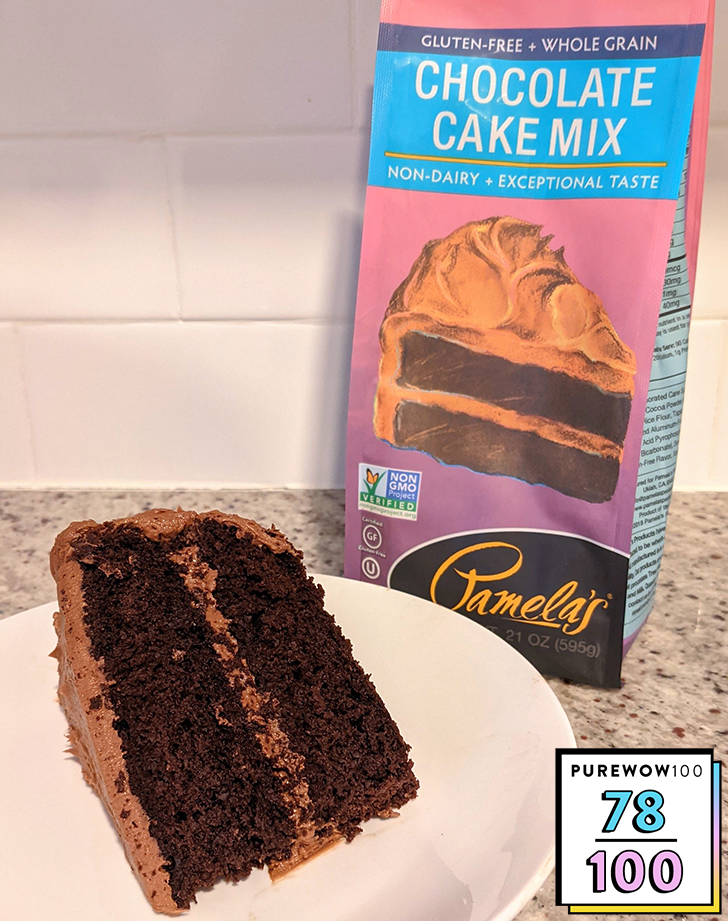 Gluten-free, certified non-GMO and made with whole grains—this cake is borderline virtuous. The flour alternatives in some gluten-free mixes overpowered the chocolaty flavor; not so here. Testers raved about its rich taste and moist, springy texture. However, if you’re going to bake a layer cake, you’ll need two mixes, making this one of the pricier options on our list. 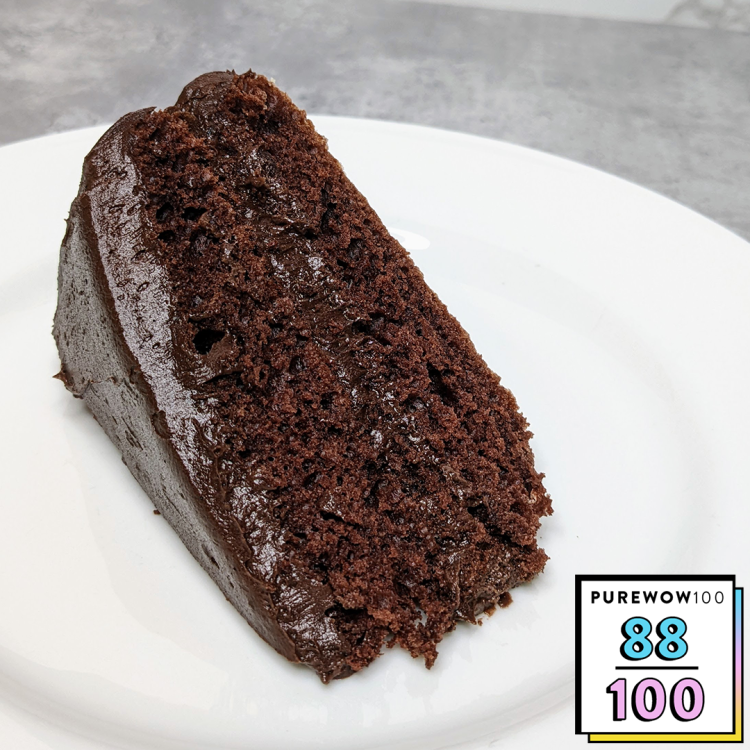 Leave it to the winner of our Devil’s Food Cake category to also nail the sugar-free version. Pillsbury’s Zero Sugar mixes—a rebrand of its previous sugar-free line—are just hitting stores this fall, and if you’re diabetic or avoiding sugar, it’s worth keeping an eye out for these mixes. (They’re so new, we didn’t have the final packaging when we tested the mix!) Sweetened with Splenda, they have a light cocoa flavor and tender crumb, without the hint of chemical-y aftertastes some sugar-free mixes have. 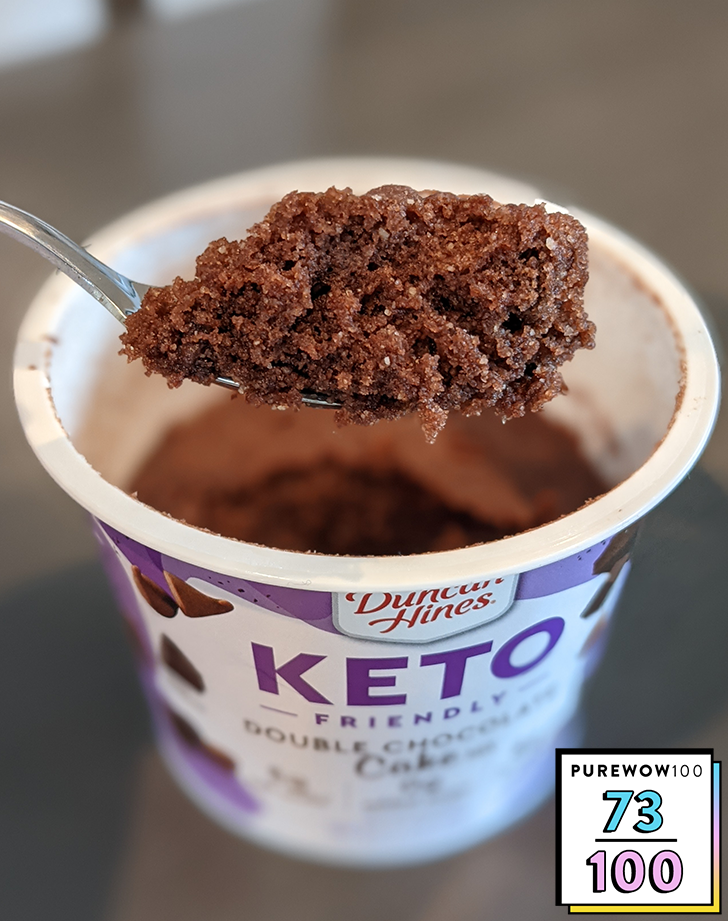 Let’s level with one another: Keto-friendly cakes barely constitute cakes. This is more of a chocolate bran muffin, honestly, but as far as zero-grams-added-sugar desserts go, Duncan’s contribution is pretty solid. There’s an almost nutty quality to this cocoa-forward, almond-flour-based treat, and it’s heartier than most cakes, but we weren’t mad about it. (Oh, and it boasts 5 grams of net carbs and 8 grams of protein per serving.) Just be forewarned that while there’s no substitute sweetener taste on the front end, it did leave a bit of an aftertaste that required more than water to sip away. 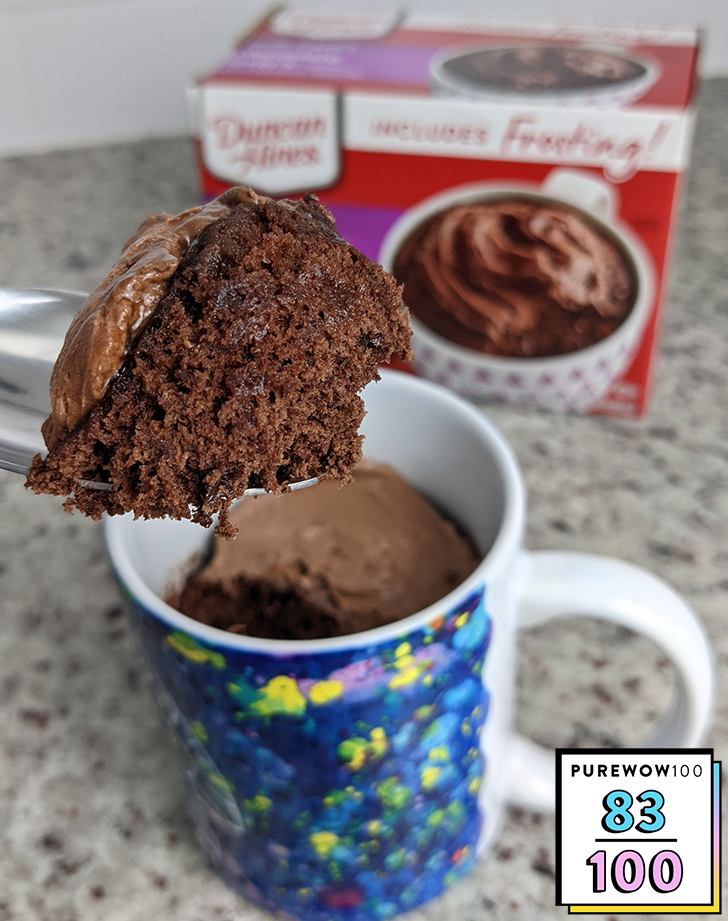 I’ll be honest: As convenient as mug cakes are, most make me wonder why you should even bother. They tend to have a murky, somewhere-between-pudding-and-damp-cake consistency—or they’re totally dry and bland. While this treat is a lot thicker and chewier than your typical slice of cake, it had a rich cocoa flavor and delightfully fudgy frosting. Plus, it’s easy enough that the kids could whip it up (and in two minutes, no less). 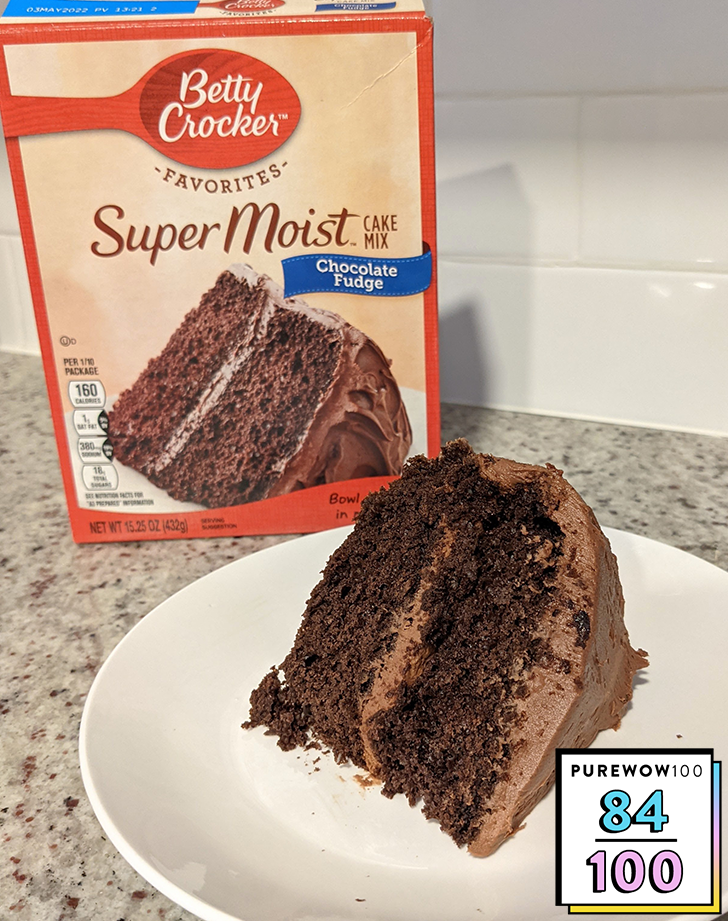 For those of you who prefer your chocolate on the sweet-and-creamy side, look no further. While “fudge” is part of the name, the overwhelming flavor note was closer to milk chocolate, like the cakey version of a Hershey bar. As for the texture, the crumb is so light it practically dissolves, making it more angel food cake-like than the others on this list. 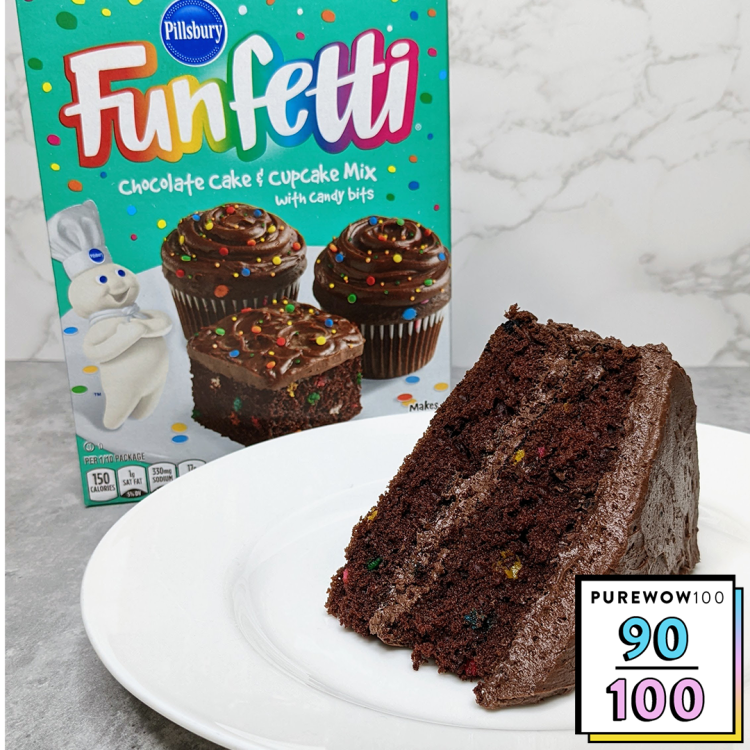 Fact: Sprinkles always get kids excited to bake (and eat). This all-in-one kit makes it easy for little hands to get in on the action, and the recipe is so straightforward—dump, stir and bake—it’s practically foolproof. This kit uses candy bits, so they don’t melt into the chocolate and disappear. The end result isn’t quite as eye-popping as a vanilla Funfetti cake, but it’s still a crowd-pleaser. The cake itself is moist and light, making it a great vehicle for rich frostings…and plenty more sprinkles. (Psst: There’s also a slime-filled kit for Halloween, if you really want to take things to the next level.) 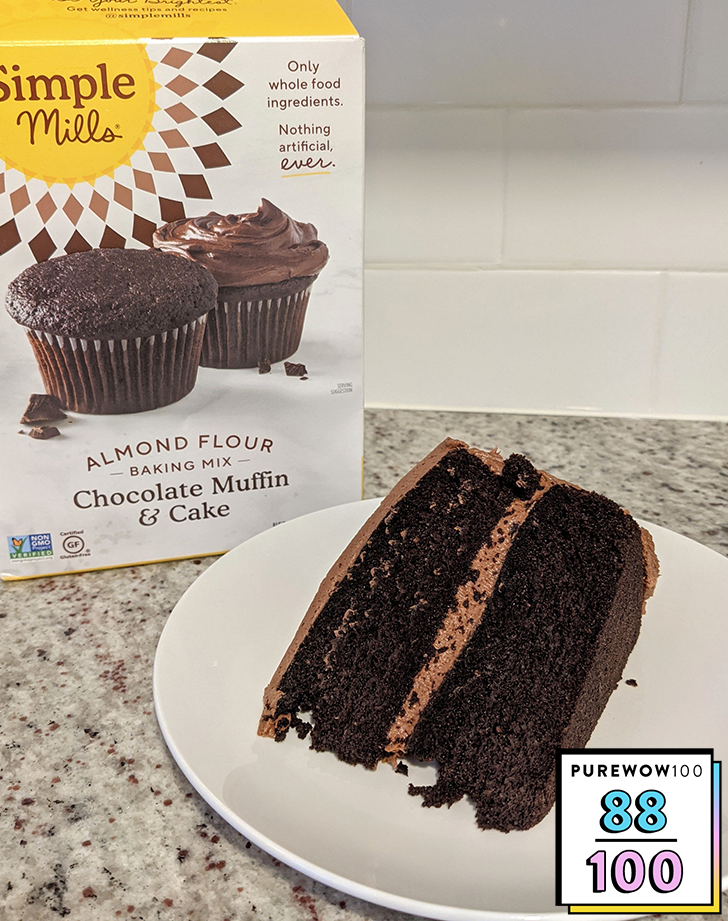 Yes, this mix is certified gluten-free and Paleo-friendly, but that’s not what had people raving about Simple Mills. While some brands elicited an immediate “is this keto or something?” response, every tester commented on how powerful the dark chocolate flavor was. “It practically melts in your mouth,” one tester said, noting that he liked that it wasn’t as sweet as most of the other cakes we tried. Before you stock up, there are two things worth noting: (1) Each mix makes only one 8-inch round, so you’ll need two to bake a layer cake, and (2) It requires a tablespoon of vanilla extract, in addition to the standard box mix eggs, oil and water. 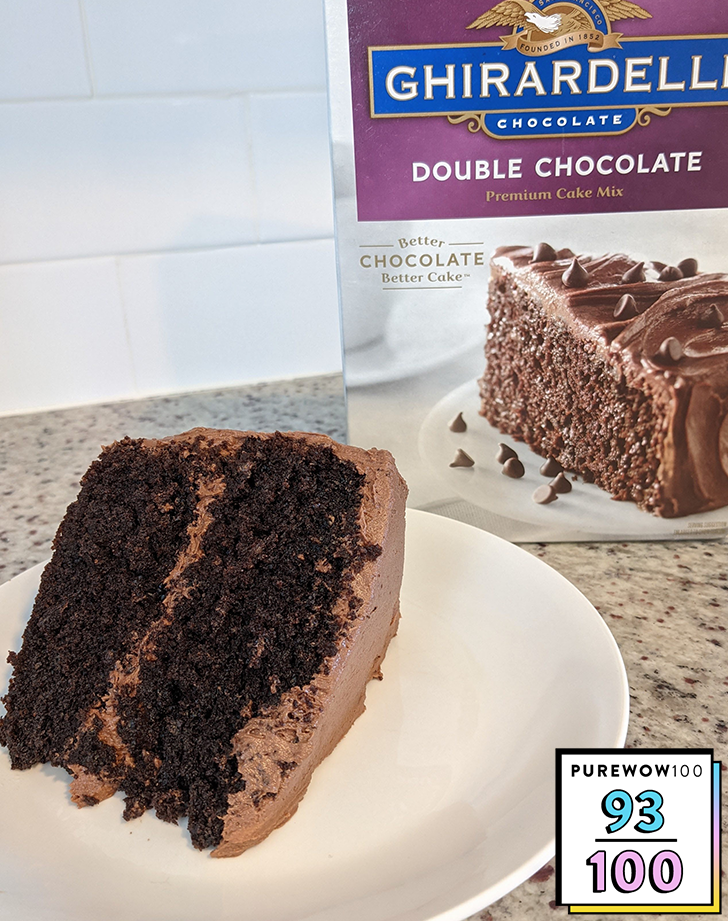 For years, this has been my go-to box cake mix—until I tested King Arthur (more on that next). Ghirardelli is a great option if you’re looking for a cake that tastes high-end without the bakery price tag. As you may have guessed, it features Ghirardelli semisweet chocolate front and center, giving it that Goldilocks quality of being not too sugary and not too bitter. The texture isn’t as airy as Duncan and Betty, giving it more of a toothsome quality, but it tends to dry out quickly, so frost and enjoy it as soon as it cools. 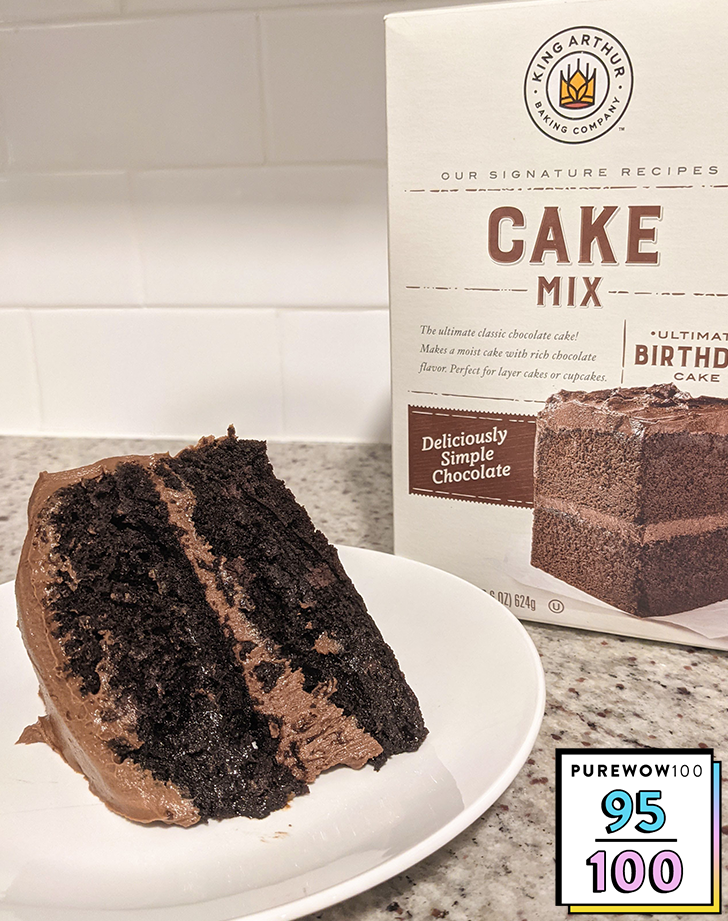 Most Matilda-Esque (aka Best All-Around)

Finding this cake is a literal hunt—most stores stock the gluten-free variety but not the classic—so you’re better off buying it in bulk online. Because honestly, every taste tester was blown away by this cake. It’s as moist and fudgy as the cake seen in Matilda, with a smooth, almost velvety texture and a rich cocoa flavor. The end result is almost brownie-like, and we’re here for it. King Arthur recommends adding a cup of chocolate chips to the batter; we agree wholeheartedly.