After numerous delays and much anticipation, the latest James Bond film (and Daniel Craig’s last), No Time To Die, finally debuted on at London's Royal Albert Hall on September 28. As no major London event would be complete without an appearance by at least one royal, Prince William, Kate Middleton, Prince Charles and Camilla Parker Bowles were all in attendance, showing off their best Bond-approved attire. And while the men of course looked dapper in their 007-inspired tuxedos and KMiddy stunned in a gold Jenny Packham gown, we were most excited by the Duchess of Conrwall’s elegant Disney-inspired choice for the premiere. 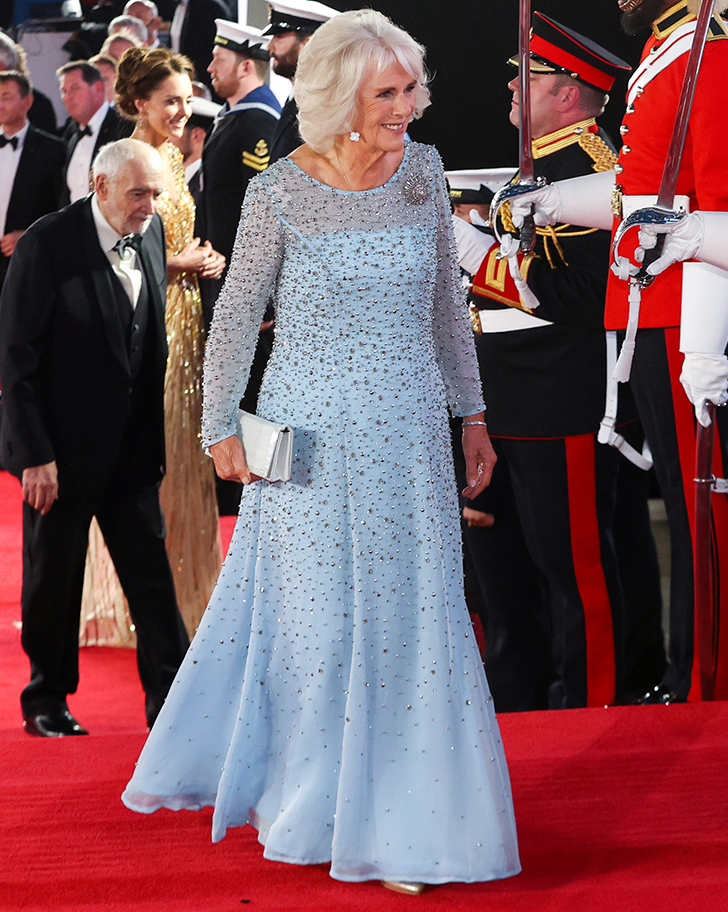 OK, so it’s unlikely Parker Bowles actually went out of her way to embody Frozen’s Queen Elsa for the event, but fans of the royals have been making the comparison nonetheless. Her gorgeous icy-blue gown is by Bruce Oldfield—an OBE recipient who has dressed numerous celebrities ranging from Rihanna to Catherine Zeta-Jones to Faye Dunaway, and even Princess Diana—and is adorned with a glittering cascade of embellishments that peter out at the hem, giving the impression of snow or rainfall. We have to admit, it does resemble Elsa’s shimmery ensemble from the film, including the sheer long sleeves and flared hem.

Rather than accessorize with a frozen crown, Parker Bowles opted for a pair of classic Van Cleef & Arpels earrings, metallic point-toe heels and a simple white clutch. This also marks the first time the duchess has worn Princess Marie Louise’s Diamond Starburst brooch. Princess Marie Louise was Queen Victoria’s granddaughter, and the intricate silver brooch (featuring a central diamond cluster surrounded by diamond rays, hence the name starburst) was given to her after the Queen’s death in 1901. Marie Louise wore it often in the years followed, including at the coronation of Queen Elizabeth II in 1953. It was later inherited by the Queen Mother, then passed on to Elizabeth and now it seems to have made its way to Parker Bowles.

No word yet on what Camilla or the other royals thought of Daniel Craig’s final performance as 007. For that matter, we’ve also never heard their review of ﻿Frozen﻿, though it certainly seems a good place to look for red carpet inspiration.