To say that I consider Clue to be the best movie of all time feels a bit ridiculous to me. It's the same as me saying, "The sky is blue" or "The earth is round" or "People should stand on the right side of the escalator and walk on the left side of the escalator." It's like, duh, come on, of course, it's science, there's no refuting this.

And I know I'm not alone in my love of all things Clue. If you've watched it, you know (and if you know, you know).

For those of you who somehow don't know (no judgment but also, like, a lot of judgment), Clue is a murder mystery comedy inspired by the board game of the same name, starring Tim Curry, Christopher Lloyd, Madeline Kahn and more. When it came out in 1985, the film was campy, the film was star-studded, the film was a flop. But after being a bomb at the box office, the movie went on to gain a massive cult following over the years—I consider myself one of those cult members. There's even a Clue remake in the works with Jason Bateman and Ryan Reynolds.

Having partaken in dozens of viewings over the years, I still have to say that my biggest joy comes from watching it with a friend who is seeing it for the first time. Finally, they will understand what I'm talking about when someone in life refers to a cook and I suddenly blurt out, "But look what happened to the cook!" But most importantly, they will understand why I consider Clue to be the best movie of all time.

This week on PureWow's entertainment podcast Stream On, I dive into exactly what makes the film so good (head to the 22:00 timestamp below). Oh, and my co-host Rachel Gulmi has a different pick for her favorite film ever...

But in the meantime, here are 10 pieces of irrefutable proof to back up my claim.

The 75 Best Halloween Movies of All Time 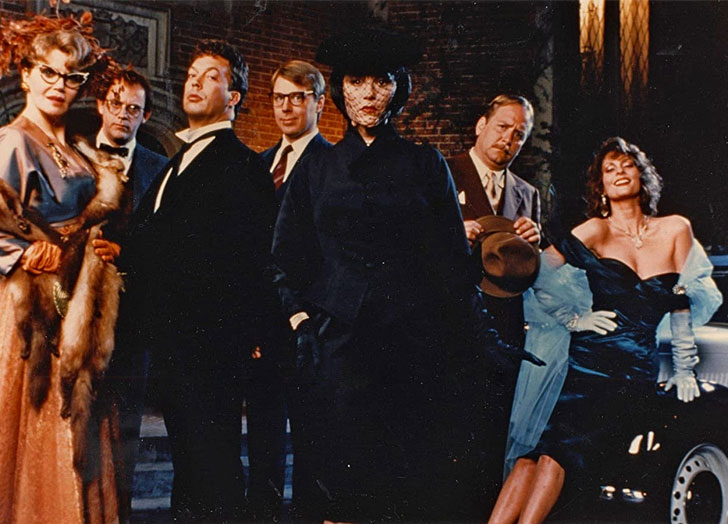 If you're unfamiliar with the work of Ms. Kahn, Clue is a great place to start. She steals every scene she appears in (AKA 90% of the movie) as Mrs. White. Her comedic performance is at once nuanced and over-the-top, each joke at once juvenile and 'a thinker'. She has perfected the art of deadpan delivery, making her the favorite of many (if not most) Clue fans.

Perhaps her most memorable—and quotable—moment arrives late in the film with the seemingly improvised and brilliantly delivered line, "I hated her, so much...it- it- the f- it- flam- flames. Flames, on the side of my face, breathing- breathl- heaving breaths. Heaving breaths... Heathing..." A ridiculous quote that could only come from Madeline Kahn herself.

Obviously, with a star-studded group such as this, the film could easily have gone off the rails. However, this cast masterfully balances the comedic give and take of each and every scene.

Tim Curry is a delightful and energetic butler running the household (and driving the plot forward) as Wadsworth. Michael McKean's bumbling Mr. Green is both enjoyable and uncomfortable to watch. His best moment comes when he slaps a wildly hysterical Mrs. Peacock (expertly portrayed by Eileen Brennan) and sheepishly tries to explain himself, "I had to stop her from screaming." Lesley Ann Warren as Miss Scarlett, Christopher Lloyd as Professor Plum and Martin Mull as Colonel Mustard round out one of the best ensemble casts to ever appear on film. Again, if you've seen it, you get it.

For those who are fans of Mel Brooks comedies such as Young Frankenstein, or Leslie Nielsen in Naked Gun or Airplane!, or literally any of the Christopher Guest films, Clue is going to be right up your alley.

The film vacillates between all-out slapstick—characters running into each other in the hall and falling to the ground; Mr. Green spilling his drink on Mrs. White after a loud gong—and surprisingly sharp humor. Like most well-crafted films, this one starts with more subtle jokes (including a running gag where each of the characters checks their shoes upon their arrival as they think they've stepped in dog poop) and escalates to over-the-top humor and all-out chaos (the characters are sprinting from room to room as we finally found out how the killer was able to pull off each of the murders).

It would be a real struggle not to find something to laugh about in each minute of Clue. 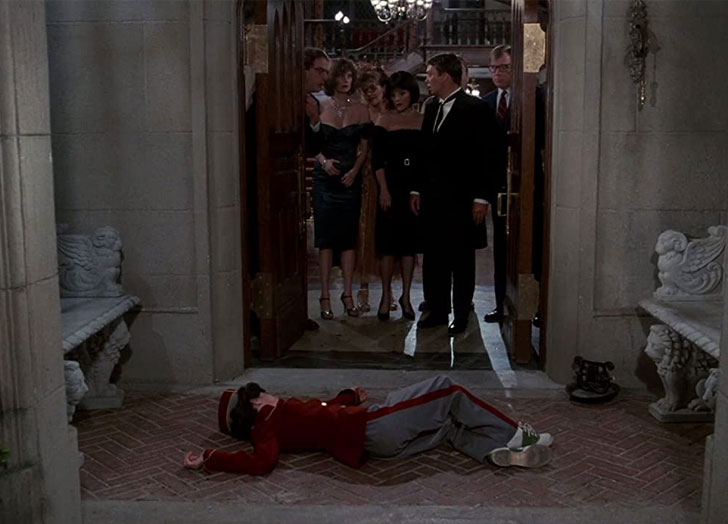 Not to state the obvious, but half the fun of this film's first viewing is trying to figure out who the killer is. And upon subsequent viewings, it's just as fun to look for clues as to how and when they did it all.

As someone who grew up equally obsessed with Murder, She Wrote and Scooby Doo, I am a sucker for a murder mystery. And Clue does not disappoint in this area. In fact, the sheer number of dead bodies—and the complicated explanation as to how they got that way—would make even Jessica Fletcher proud.

The film cleverly sets things up so that there could be three potential explanations for all of the murder and chaos going on in the Clue mansion. Each one is an enjoyable and believable ending. But the third, which is accompanied by the text 'But here's what really happened', is by far the best and most satisfying. And it has the best final line, confidently delivered by McKean's Mr. Green (I won't ruin it for you).

I can only imagine how annoying it must be to listen to your friends and loved ones quote Clue when you've never actually seen it. I suspect this should be motivation enough to turn it on this evening...

That's because the film is unbelievably quotable. Here are just a few of my favorites:

"And monkey's brains, though popular in Cantonese cuisine, are not often to be found in Washington D.C."

"But look what happened to the cook!" 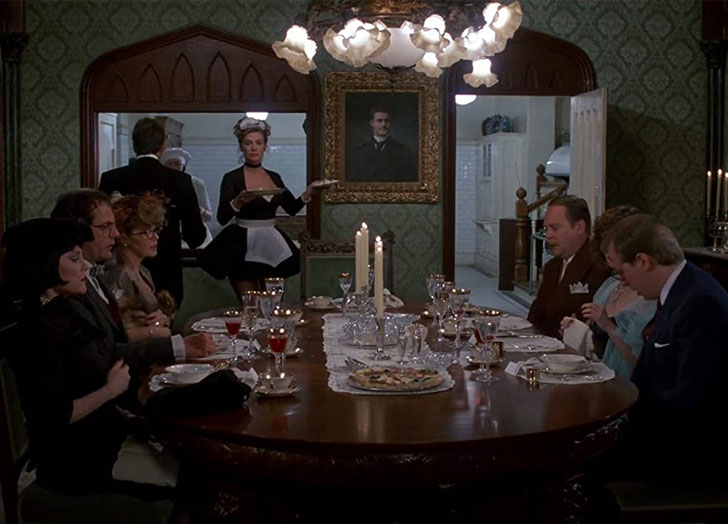 7. It's The Ultimate Source For Halloween Costume Ideas

What film (aside from something in the Marvel universe) could inspire so many great costume ideas?

Obviously, if I were to choose, I would dress as Mrs. Peacock. That feather hat and those glasses are iconic enough that strangers would immediately point and say, "No, I just wanna powder my nose."

But beyond the individual ideas, this cast would make for an incredible group costume. Got a larger group? There's no shortage of minor characters to round things out with the maid, the cook, the cop, the stranded traveler, the singing telegram girl...

8. It Gets Better with Every Viewing

Clue is just one of those films that gets better every single time you watch it. Why? Well, once you aren't trying to figure out whodunnit, you're able to notice all of the incredible details and appreciate all of the extremely nuanced jokes.

Also, to go back to the point about the movie being quotable, each subsequent view helps you to perfect the exact lines of dialogue so you can deliver them in social settings and impress (or confuse) those around you.

9. The Nostalgia Factor Is Real

Beyond reminding me of the murder mysteries that I used to watch as a kid, Clue brings up feelings of nostalgia related to the actual board game. I used to love playing it as a kid (I know I'm not alone here). And the movie plays on that nostalgia factor by including plenty of game references.

Obviously the characters are the same. But also the weapons and the room names are the same as in the board game. They even include the same secret passages that I used to love to take as a child in my quest to defeat my parents—I'd eventually announce dramatically, "It was Mrs. Peacock...in the Conservatory...with the Lead Pipe." I was (almost) never wrong.

In calling this the best film of all time, I'm sure to ruffle quite a few feathers. "What about Schindler's List?" my mother might ask pointedly. (I'd reply with a Seinfeld joke about necking, which would be neither appropriate nor understood by her.)

But while there are clearly dozens of incredible films out there, I would argue that Clue is the lighthearted distraction we could all use in a moment like this. The last couple years have been, in a word, rough. This ridiculous movie may just be the light-hearted comedy that injects a little joy back into our day/week/month/year.

The 40 Best Family Movies of All Time