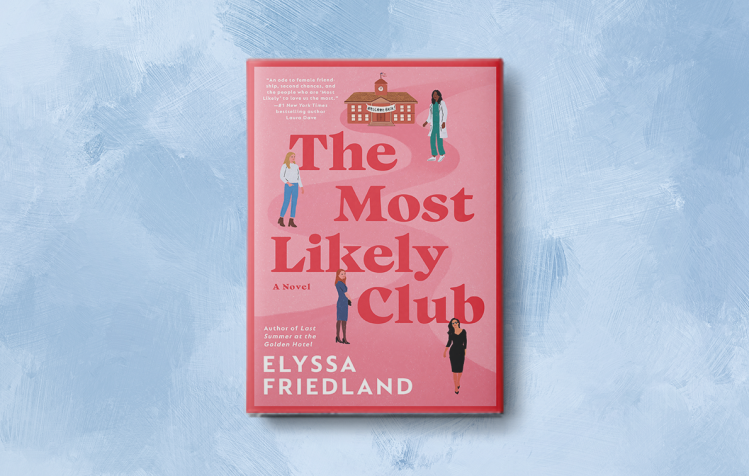 For a lucky few, high school reunions are a fun way to reconnect with old friends while reminiscing about simpler times. For most of us—including the four protagonists of The Most Likely Club, the latest by novelist and Yale writing professor Elyssa Friedland (Last Summer at the Golden Hotel)—they’re simply an unwelcome blast from the past complete with awkward small talk, room temperature finger food and reminders of squandered potential.

The novel starts in 1997 in a small Connecticut town. Melissa, Priya, Tara and Suki have their whole lives ahead of them. On the verge of graduating high school, they’ve been named Most Likely to Win the White House, Most Likely to Cure Cancer, Most Likely to Open a Michelin-Starred Restaurant and Most Likely to Join the Forbes 400.

Cut to 25-ish years later and, though the women are still close, all but one have moved increasingly away from their superlatives: Melissa is divorced from her high school sweetheart and caught up in inane PTA drama; Priya is a doctor, but instead of curing cancer she’s dealing with her colleagues’ racist and sexist comments; and Tara gave up her aspirations to be a chef after being sexually assaulted by a culinary celebrity. Only Suki, who is wildly successful after creating a popular app, seems to have turned out the way everyone expected.

Reuniting on the eve of their reunion and commiserating about how far they have (or haven’t) come stirs something in the friends, and they resolve to become the people their high school classmates thought they’d be, all those years ago. Will Priya finally get her surgeon husband to shoulder some of the responsibilities at home (a lot of weaponized incompetence here, folks)? Will Melissa embrace the growing trend toward body neutrality and stop spending so much time and energy worrying about how she looks? With chapters fluctuating between the protagonists’ perspectives, we see how each friend attempts to make small changes in their life to find more happiness and fulfillment on a grander scale.

Friedland adeptly captures the conflicting feelings of excitement and dread one feels ahead of a reunion, as well as the weird in-betweenness of early middle age. Though frequently light and funny (the ‘90s references come fast and furious), the book doesn’t shy away from heavier themes.

Perfect for fans of Emily Henry (Beach Read) and Gail Honeyman (Eleanor Oliphant Is Completely Fine), The Most Likely Club is a celebration of embracing all the ways your life derails—and the friends who help you along the way.

9 Books We Can’t Wait to Read in September