I Hate How Much I Love Ultracor’s $198 Workout Leggings 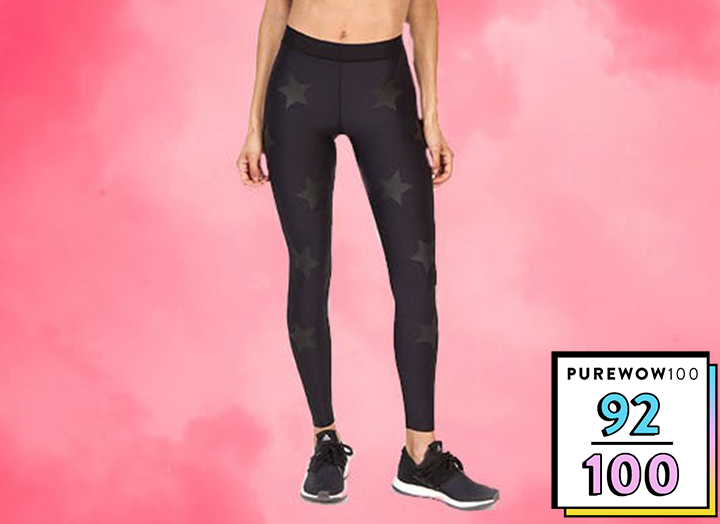 Over the past seven years, I have worn exactly one (1) style of workout pant. It’s a basic Nike legging, 15 pairs of which I’ve acquired and retired—a fact that’s slightly startling, considering they cost $90 a pop. Still, I adore the way they fit when I put them on and how they feel during rowing classes, boxing sessions and everything in between.

I’d have been perfectly content wearing that style for the rest of my fitness-filled days, but a few weeks ago, I was lucky enough to try out a pair of Ultracor Lux Knockout Print Leggings. Although they’re black, they’re a bit bolder than I’m used to, thanks to an all-over star print in a muted dusty blue color (they’re also available in matte and patent black versions). I was hesitant—could I really cheat on my Nikes?—but decided to give them a shot when fate intervened. (By fate, I mean they were the only clean pair in my drawer.)

I wore them to a spin class and within approximately 35 seconds, I could tell that they were about to dethrone my trusted Nikes.

See, Ultracor’s bestselling legging is made of high-stretch, soft compression fabric that’s somehow constructed perfectly without any seams at all. Each pair does feature built-in underwear that smooths lumps and bumps, while making your butt look absolutely amazing. (The underwear manages to do all that without creating a visible panty line situation—or riding up uncomfortably.) Despite having a painted-on appearance, they stay put through burpees, box jumps and sprints on the rowing machine, without ever feeling too tight. They’re also majorly sweat-wicking. I’m the sweatiest person I know, and while they’re certainly damp after a 45 minute workout, they’re way less saturated than any other leggings I’ve worn.

And while it’s not a technical detail, it’s worth mentioning that these leggings are damn cute. I’ve gotten compliments on them from women in workout classes and the lady who lives in the apartment next to mine whose name I don’t know but who told me my “workout pants were very rad.”

Now the negative: At $198, they’re about $100 more than I’m used to spending on leggings (I also admit that spending $90 on a piece of stretchy fabric is kinda kooky to begin with). Still, having tried these Ultracors, I can confidently say that if you can afford the splurge, it’s totally worth it. I’d also suggest keeping an eye out for sales: A few pairs are currently marked down on Nordstrom (like this leopard pair that’s only $78), but sites like Bandier and Carbon38 have also been known to offer discounts on these leggings.

Does this mean I’m ditching my beloved Nikes for good? Hell no, but this new pair will be in heavy rotation moving forward.

Could a Sports Bra Actually Shave Minutes Off Your Pace? We Hit the Treadmill to Find Out