5 Reasons Why Diets Don’t Work and 11 Things to Do Instead, According to Experts

It’s no secret that America has a weight problem. According to the Centers for Disease Control and Prevention, the prevalence of obesity was 39.8 percent and affected about 93.3 million adults in the U.S. between 2015 and 2016. Whether you’re looking to lose a large amount of weight, or just trying to drop a few pounds, one of your first courses of action is probably to diet. Here’s the thing, though: Studies and experts agree that diets don’t work. Here’s why—plus how to shed pounds the healthy (and sustainable) way.

: How to Detox from Sugar (with as Few Withdrawal Symptoms as Possible) 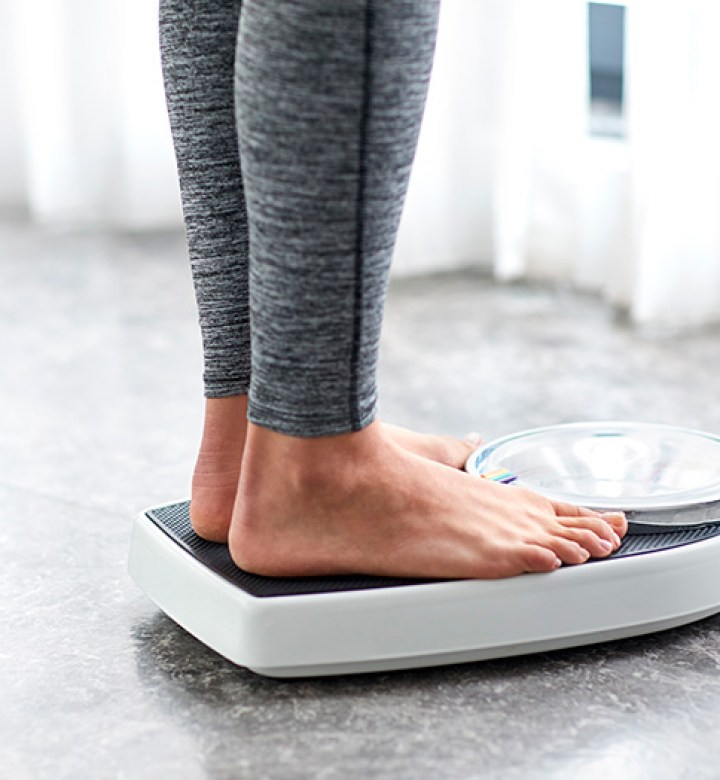 1. Diets Can Cause Your Metabolism To Slow Down

Yes, you need to be in a caloric deficit to lose weight (translation: you need to burn more calories than you consume), but eating too few calories can wreak havoc on your metabolism. A study published in the journal Environmental Health and Preventive Medicine examined the metabolisms of people on severely low-calorie diets versus those on moderately low-calorie diets. Researchers found that subjects on the severely low-calorie diets lost weight at a slower rate. The idea is that, when you severely restrict calories, your body overcompensates by slowing down your metabolism to make the most of the calories you are consuming.

2. Diets Mess With Your Hunger Cues

A good amount of the time you spend dieting is devoted to ignoring or suppressing your hunger. In the long run, this can make you less responsive to natural hunger cues, which in turn makes it harder for you to listen to your body and regulate your weight. Sandra Aamodt, PhD and the author of Why Diets Make Us Fat, told NBC, “You become more at risk of emotional eating, eating out of boredom, and are more vulnerable to environmental cues that tell you to eat more than your body actually wants.

3. The Weight Loss You Experience On A Diet Is Temporary

One of the biggest problems with diets is that they aren’t a sustainable solution. It’s a familiar story: You try so-and-so trendy diet for three months and lose 15 pounds. You’re psyched. After going back to your normal eating patterns, though, the weight creeps back on. Studies have shown time and time again that weight lost via diets is very temporary. A 1996 study at Harvard Medical School, for example, surveyed 192 participants during and after a diet program. On average, members of the group lost 49 pounds during the diet program. After three years, “the mean weight was only modestly less than the group's original weight at the start of the diet. Twelve percent of the subjects maintained 75 percent of their weight loss after leaving the diet program, 57 percent maintained at least 5 percent of the loss and 40 percent gained back more than they had lost during the diet.” A 2007 study at UCLA found much of the same. Traci Mann, a UCLA associate professor of psychology and lead author of the study, said, “You can initially lose 5 to 10 percent of your weight on any number of diets, but then the weight comes back. We found that the majority of people regained all the weight, plus more. Sustained weight loss was found only in a small minority of participants, while complete weight regain was found in the majority. Diets do not lead to sustained weight loss or health benefits for the majority of people.”

Thinking of food as the enemy takes the pleasure out of an activity that should be pleasurable. It can also lead to disordered eating behaviors. Even diets that are marketed as healthy or wellness-focused could cause a fairly new type of eating disorder, orthorexia. According to the National Eating Disorder Association, “The term ‘orthorexia’ was coined in 1998 and means an obsession with proper or ‘healthful’ eating. Although being aware of and concerned with the nutritional quality of the food you eat isn’t a problem in and of itself, people with orthorexia become so fixated on so-called ‘healthy eating’ that they actually damage their own well-being.” Instead of labeling foods as “good” or “off-limits,” let yourself eat what you want to eat, but do so in moderation.

5. Diet Stress Can Cause Overeating

If you’ve ever been on a diet, you know it’s not a super pleasant experience. You’re depriving yourself of calories and the food you actually want to be eating. Stressing about your diet doesn’t feel good, and it goes against your progress. Studies—like this one in the journal Appetite—have found increases in the stress hormone cortisol are linked to overeating. Additionally, increased cortisol levels can also cause your insulin levels to rise and blood sugar to drop, making you crave sugary, fatty foods. 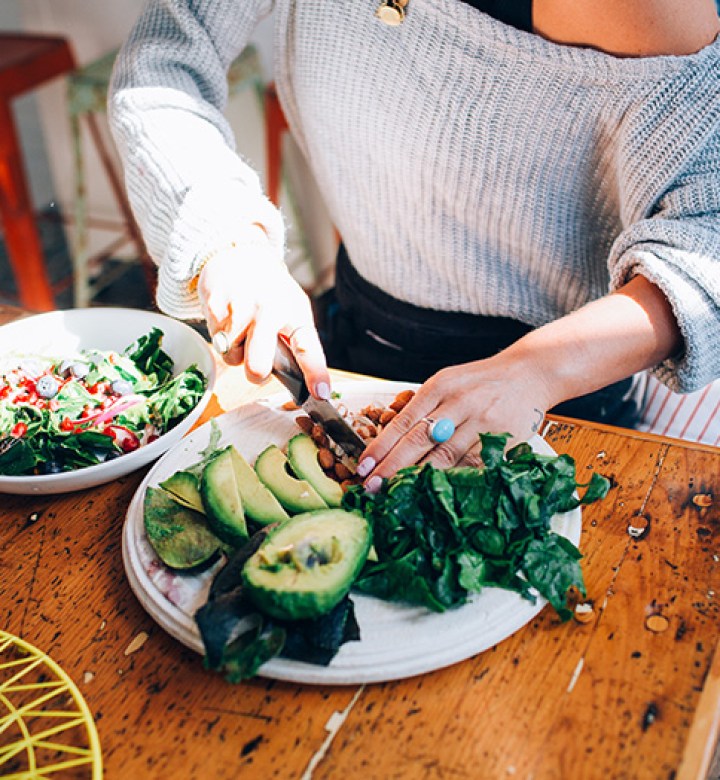 What To Do Instead

Picture it: You’re sitting in front of the TV with a giant takeout dinner you meant to spread over two meals. You’re fully engrossed in whatever you’re watching and before you know it, you’ve mindlessly plowed through your entire order. To avoid unintentionally overeating, try practicing mindful eating, which basically means being in the moment while you calmly eat with intention. It also turns the act of eating into a really pleasant, not-stressful experience.

2. Cook Your Own Meals

Sure, it’s more time consuming, but making your own food instead of going out to eat is a super-easy way to eat healthier (and, as an added bonus, save money). Restaurants load their dishes with sugar, salt and other unhealthy ingredients. Plus, the portion sizes are usually massive. Cooking at home ensures you know exactly what’s going into your meals and gives you a better handle on how much you’re eating.

Consistently drinking water is one of the best things you can do for your health and also one of the easiest. In addition to keeping your skin clear and your energy up, staying hydrated boosts your metabolism, makes you feel full (per a 2015 study from the University of Oxford) and keeps you from drinking the not-so-great-for-you beverages we mentioned above.

4. Read Labels For Ingredients, Not Calories

Just because we’re advising against intense calorie restriction doesn’t mean you should ignore nutritional information altogether. It’s more about knowing what to look for on a label. A product could have just 100 calories per serving and seem virtuous…until you look a little lower and see that it also contains a whopping ten grams of sugar. Here’s a super-helpful primer on label reading we go back to again and again.

Instead of rewarding yourself for hitting the gym three days in a row with a pizza and milkshake (which pretty much negates the work you put in on the spin bike), get a manicure or buy a new book you’ve been eyeing.

Rome wasn’t built in a day, and weight doesn’t fall off your body after you eat a single salad. If weight loss is your goal, it’s crucial to be kind to yourself and your body. You might be someone who loses weight at the drop of a hat, but you might not, and that’s OK. Cut yourself some slack and don’t quit when, after a week, you don’t look like a Hadid sister.

You, like us, are probably more miserable in general when you haven’t gotten enough sleep, but did you know that being tired can also spell disaster for your weight loss goals? Studies—like this one published in the Journal of Nursing Scholarship—have shown that a lack of sleep can increase hunger and cravings, as well as cause weight gain by messing with levels of the hormones ghrelin and leptin.

When we imagine the things that are making us hold onto excess pounds, we typically imagine cake and chips and French fries. We often overlook the sheer amount of calories (and sugar) in the beverages we’re drinking. To drop pounds without counting cals, limit soda (regular and diet), fancy coffee drinks and alcohol. We know that iced caramel macchiato is tempting, but try training yourself to prefer black coffee.

9. Fuel Up With Protein

The reason for this is threefold: Loading up on protein reduces your appetite, increases fat-burning and helps you gain muscle. Basically, the trifecta of health goals. Note that protein doesn’t have to been chicken or red meat—here are seven fabulous meatless sources, from chickpeas and lentils to quinoa and tahini.

10. Allow Yourself To Snack

When you eat small quantities throughout the day, you’re less likely to be ravenous at traditional meal times. But when we say “snack,” we’re talking healthy options, people. Here are nine filling foods to munch all day that won’t wreck your diet but will still keep you firing on all cylinders.

A little visual trickery never hurt anyone, right? By eating on smaller plates, you’re essentially fooling your brain into thinking you’re eating more. It sounds kind of outlandish, but in practice it has definitely worked for us. (Note that this might not work as well if you’re super hungry.)