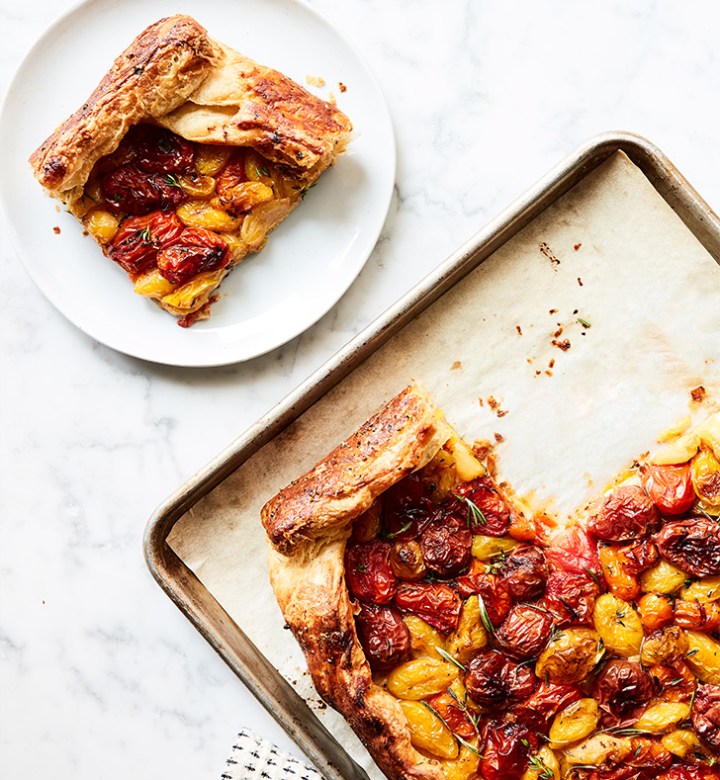 Sweet, roasted cherry tomatoes and a beyond flaky crust? Sorry, takeout pizza, but we’re breaking up with you for pastry chef Erin McDowell’s cherry tomato galette.

“This is like pizza on steroids,” the author of The Fearless Baker tells us. “It would be great alongside eggs at breakfast or a big salad at dinner, and it’s fantastic to cut into bite-size pieces for a party appetizer.”

Her advice? Use store-bought puff pastry so everything comes together in no time. And if you want to take it a step further, you can easily make it ahead. Just roast the tomatoes the night before (they’ll keep in the fridge for a few days) and assemble the galette the day of. “Either way, it doesn’t take that much time—it could be a weeknight thing as well,” she says.

And you thought we were coming over just for brunch.

5 garlic cloves, unpeeled and smashed with the side of a knife

One 14-ounce (397g) sheet frozen puff pastry, thawed in the refrigerator overnight (such as Dufour)

1. Roast the Tomatoes: Preheat the oven to 400°F. Spread the tomatoes and garlic in an even layer on an unlined baking sheet. Drizzle the olive oil over the tomatoes and toss well to combine. Sprinkle the rosemary and thyme evenly over the mixture, then season with salt and pepper.

2. Transfer the baking sheet to the oven and roast until the tomatoes are blistered and appear collapsed, 18 to 20 minutes. Let the tomatoes cool completely.

3. Prepare the Puff Pastry: While the tomatoes cool, roll out the puff pastry on a lightly floured surface to ¼-inch thick. Transfer it to a parchment-lined baking sheet, then dock it all over with a fork (this keeps it from puffing up too much in the oven).

4. In a small bowl, squeeze the roasted garlic out of its skin and use a fork to mash it with the Parmesan. Spread the mixture onto the puff pastry, concentrating it toward the center and leaving at least 2 inches uncovered around the edges.

5. Assemble the Galette: Arrange the tomatoes in an even layer in the center of the dough, leaving the edges uncovered. Fold the uncovered edges up over the tomatoes, encasing the perimeter of the filling.

6. In a small bowl, whisk the egg with 2 tablespoons water to make an egg wash. Brush the egg wash evenly over the exposed puff pastry and grate a little more Parmesan on top.

7. Transfer the baking sheet to the oven and bake the galette until the crust is evenly golden brown and very crisp, 30 to 35 minutes. Garnish with the rosemary and thyme sprigs, if using. Allow the galette to cool for 15 minutes before serving.