The 50-year-old Black-ish alum took to Instagram to show off her present: a sweatshirt highlighting Black female lawyers from TV shows, including Ross's character of Joan Carol Clayton, Esq., in Girlfriends.

The top was designed by Washington, who's been working as an executive producer on the new Hulu series Reasonable Doubt.

Ross happily smiled as she showed off the sweatshirt in her post. “As a former Black Woman TV lawyer (Joan Carol Clayton, Esq) I have no objections!” she wrote. “Shout out to my friend @kerrywashington for creating this cute sweatshirt celebrating #BlackWomenTVLawyers in honor of her legal drama @reasonabledoubthulu!”

In addition to Joan, the sweatshirt was stacked with the first names of other iconic characters, including Annalise Keating (Viola Davis) from How to Get Away with Murder, Molly Carter (Yvonne Orji) from Insecure, Jessica Pearson (Gina Torres) from Suits, Clair Huxtable (Phylicia Rashad) from The Cosby Show and Maxine Felice Shaw (Erika Alexander) from Living Single. 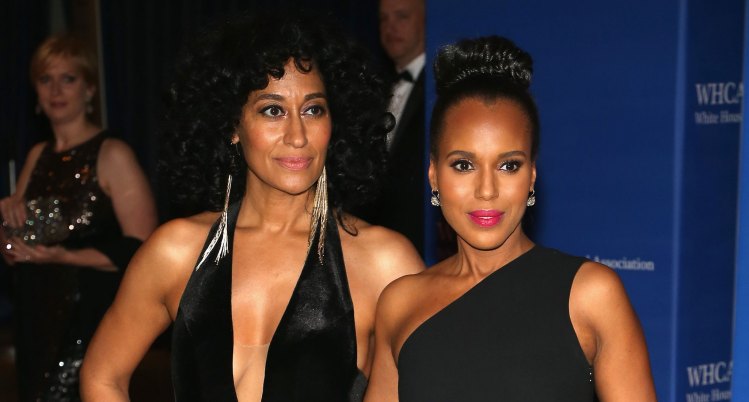 Washington also included one of her own characters— Olivia Pope from Scandal. To round out the list, there was Jax Stewart (played by Emayatzy Corinealdi) from Reasonable Doubt.

Washington showed off one of the sweatshirts on her own Instagram, where she wrote, “Welcome to the club, Jax. #BlackWomenTVLawyers.”

Reasonable Doubt follows the L.A.-based Jax as she tries to balance her high-profile cases with the workload of being a single mother. (The first season got a perfect 100 percent score on Rotten Tomatoes, based on eight critical reviews, BTW).

Corinealdi showed her excitement to be among such a talented cohort of women by modeling her own sweatshirt in a post, which she captioned, “Thank you for the invite, Olivia. #blackwomentvlawyers #reasonabledoubthulu @kerrywashington @theshawnholley.”

What an incredible gift, Kerry.

Kerry Washington Dances in Church on the Set of Her New Series, ‘Reasonable Doubt’