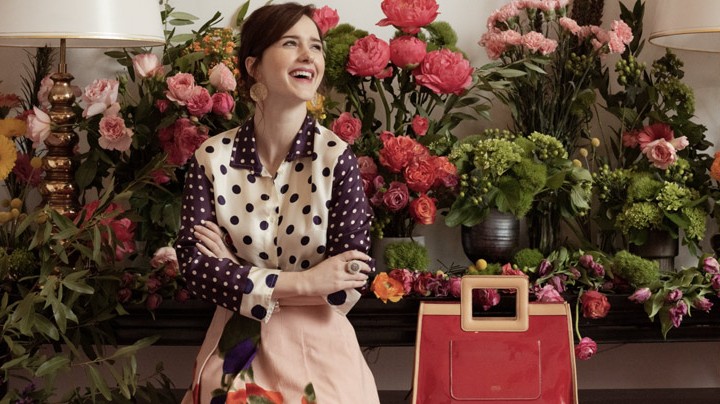 If you’re unfamiliar, the brand is a label Kate Spade founded in 2016. Brosnahan has been a huge supporter of Frances Valentine since its beginning for many reasons. But perhaps the most meaningful? She is the niece of the late Kate Spade.

“In the wake of Katy’s passing, my family and I were so overwhelmed and encouraged by the love and support we received from those who were touched by Katy’s work, many of whom were strangers from around the world,” she said in an exclusive with People.

The label (named after Spade’s daughter, Frances Beatrix) has always been about family, so when it came to finding a face for the new campaign, casting the 28-year-old actress was a no-brainer.

The photos were shot in one of Kate’s favorite places, her Frances Valentine New York showroom overlooking Bryant Park, and are reminiscent of Kate’s signature look (an undone bun, stacks of baubles, colorful bags and in a vintage-inspired ensemble). Brosnahan looks nothing short of identical to her aunt.

Says Brosnahan: “When you lose someone you love, you search for boundless ways to keep their memory alive. This felt like a way to do that through her beautiful creations and an opportunity to share them with all of those who her work meant so much to.” Hear, hear.