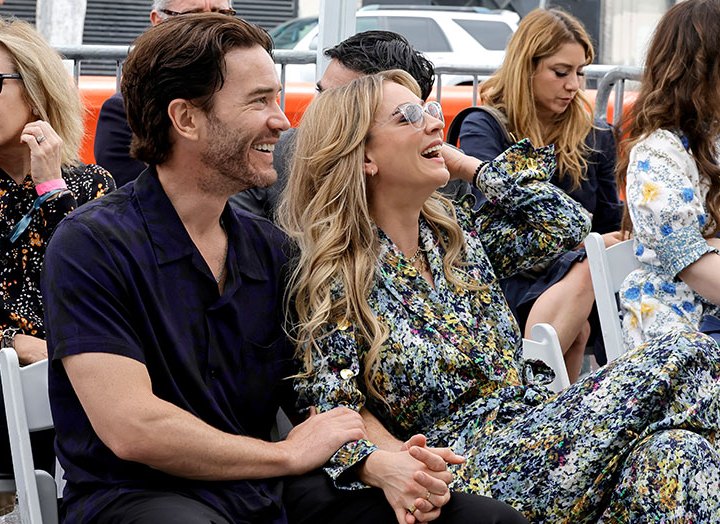 Kaley Cuoco and her new beau, Tom Pelphrey, have decided to take their relationship to the next level by attending an extravagant event in Hollywood together.

Per E! News, the two﻿ made their first appearance as a couple at the Hollywood Walk of Fame ceremony for producer Greg Berlanti. They were shown holding hands and sharing a laugh as they watched the producer (who works with Cuoco on The Flight Attendant) receive the huge honor.

Cuoco and Pelphrey confirmed their relationship by sharing a sweet Instagram post earlier this month. Accompanied by a series of photos taken together, the Big Bang Theory actress wrote in the caption, “Life lately. ‘The sun breaks through the clouds, rays of gold slipping into my eyes and heart, rays of yellow to break the grey.’” The Ozark actor posted a similar post on his page, sharing polaroids of the two making silly faces together.

This comes eight months after Cuoco separated from her ex-husband, Karl Cook. ﻿The couple tied the knot in 2018 after meeting at a horse stable, but ultimately the three-year marriage ended in 2021 when the actress filed for divorce shortly after announcing their split in a joint statement.

“Despite a deep love and respect for one another, we have realized that our current paths have taken us in opposite directions,” they told TMZ. “There is no anger or animosity, quite the contrary. We have made this decision together through an immense amount of respect and consideration for one another.”

Kudos to Kaley for finding love again after ending a three-year marriage.