She may have spent years narrating for stylish teens on Gossip Girl, but Kristen Bell has plenty of her own enviable fashion. The 42-year-old actress stopped by The Kelly Clarkson Show earlier this month, where she wore a sophisticated, wine-colored suit from NYDJ that totally stole the show.

A clip from Bell's visit was posted to the official Instagram page for the talk show, during a moment where the Frozen actress discussed her love for Magic Mike Live. However, it was her outfit that truly caught our attention.

Bell was sporting a velveteen pantsuit from NYDJ, including a classic blazer jacket in eggplant ($139) and their straight leg trousers in the same color ($119). And if you're ready to run and pick up this set that's around $250 in total, why not also snag a maroon mockneck top (like this $35 one from Gap), so you can complete the look.

In addition to her pantsuit, Bell added a pop of color to the 'fit with red, crocodile embossed leather booties, like these Marc Fisher stiletto shoes (which are currently on sale for $89).

During her visit, Bell was talking about her experience seeing Magic Mike Live in London (a show which is also playing in Las Vegas).

“In London, I had a transformative experience emotionally,” the Forgetting Sarah Marshall actress told Clarkson. “Because Ben [Platt] took me to see Magic Mike.”

Conceived by Channing Tatum (who stars in the Magic Mike films), Magic Mike Live is described as “an unforgettably fun night of sizzling, 360-degree entertainment based on the hit movies.” 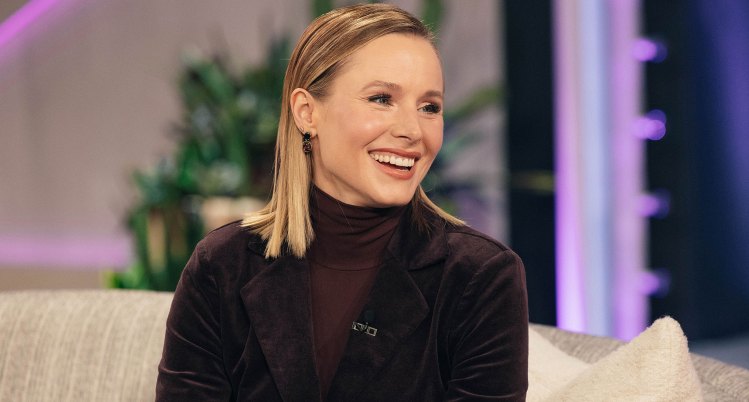 Recently, we've been obsessed with many of Bell's fashion pieces. For instance, the Good Place star posted a photo to Instagram back in August, where she showed off her stylish Leatherology Kress Mini Top Handle Bag (which just came out in a new scarlet red color for the holidays).

We can always count on you for fashion inspo, Kristen.