Wait, Why Is Carrie Bradshaw in a Wedding Dress for ‘AJLT’ Season 2?

Sarah Jessica Parker has been absolutely spoiling us lately with all of these behind-the-scenes pictures from the set of And Just Like That… season two. On social media, she has been showing a peek or two at some staple and nostalgic pieces that are coming out of Carrie Bradshaw’s closet. (And yes, there is an a pigeon purse). And now, another unforgettable ensemble will be making an appearance in a brand-new way.

Earlier this week, the 57-year-old actress was photographed filming the new season on the streets of New York City. While walking out of her apartment, Carrie could be seen wearing a wedding dress with a teal cap and matching heels. But, this was not just any wedding dress, it was the wedding dress she wore on her big day in the first Sex and the City movie. 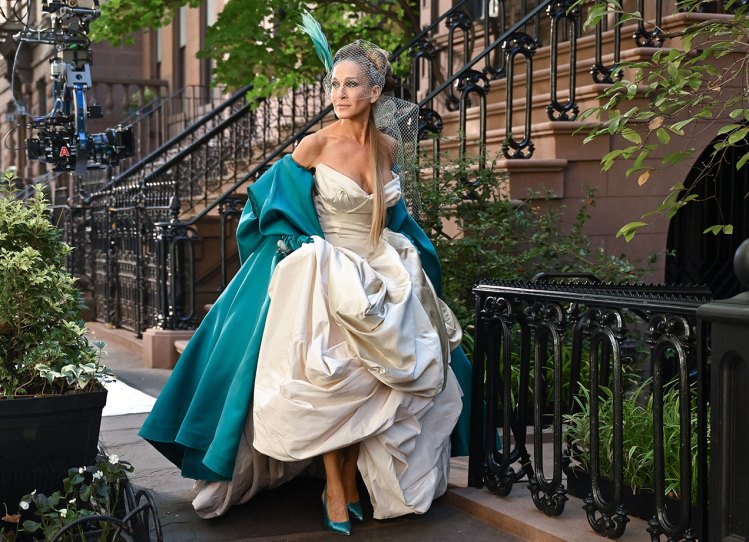 Seeing Carrie in her old wedding dress is making us feel a whirlwind of emotions. Now we’re left wondering what event she could possibly be going to where she had to take out such an important article of clothing? But, it’s Carrie we’re talking about here, so you never know. Of course, we know we have to wait for more context in the new season of And Just Like That… but we feel so compelled to play “Here Comes the Bride” now that we’ve seen these new set pics.

On Instagram, the show’s page even shared a picture of Parker wearing the iconic wedding dress. In the snapshot, the Hocus Pocus actress can be seen stepping out of a trailer (with the help of staff) and headed to set. The caption read, “Déjà vu?”