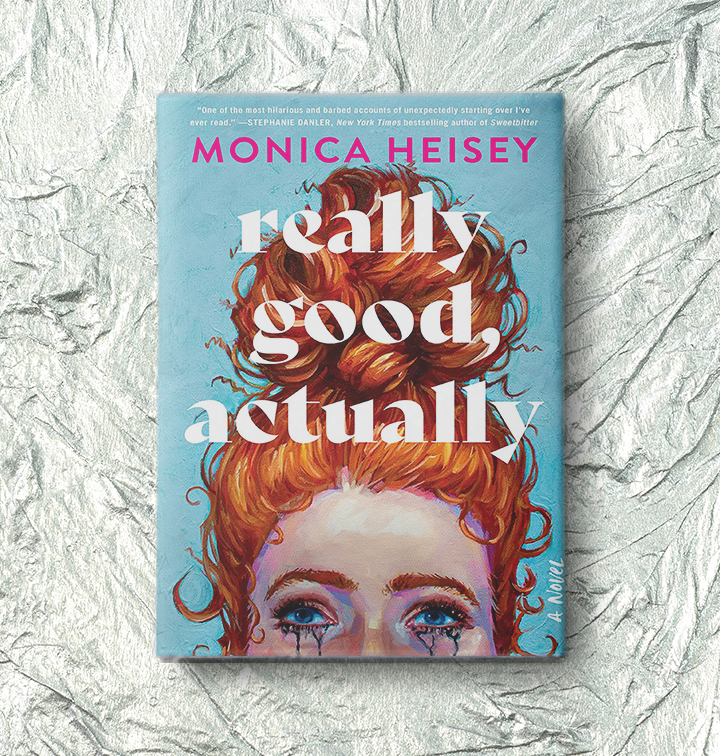 You’re 29 years old and you’ve spent nine years of your life with the same man. The logical step is to marry him, so you do. Less than two years later, your relationship is over and you’re left wondering how to be on your own—happily so, hopefully. So begins Really Good, Actually, a funny and relatable debut novel by TV writer Monica Heisey (Schitt’s Creek, Workin’ Moms).

Maggie is a PhD student living in Toronto who describes herself as wholly ordinary. “I am an average-height, redheaded academic with anemia…Technically speaking, I am an ‘average-sized’ woman—still, it is very difficult for me to buy pants, like it seems impossibly hard, and I don’t totally understand who pants are for, if not average-sized people in general.”

When her relationship ends, Maggie claims to be doing, as the book’s title suggests, surprisingly well. After all, her marriage didn’t end because of cheating or a blow-up fight or some other catastrophe. Maggie and Jon broke up because they, like millions of other couples, couldn’t make it work. “It doesn’t have to be some big conspiracy. It doesn’t have to be special. It can just be bad.”

But as much as she tries to convince well-meaning friends and colleagues—and perhaps even herself—that she’s really good, actually, she’s struggling to find her footing. Her camera roll is filled with “sadness selfies” and she’s snapping at those same well-meaning friends and colleagues. (In a Debbie Downer move, she tells a friend considering adopting a dog with her partner that “a puppy is basically a down payment on a future dog funeral.”) In an attempt to put the pieces back together, she dips her toe into the online dating pool (big yikes) and tries various distracting hobbies, from spin class to a creative writing workshop.

Throughout, Heisey’s experience as a sitcom writer is obvious. A particularly funny chapter is entirely made up of Maggie’s search history, which includes newly single girl classics like ‘parmesan cheese past expiry good to eat,’ ‘Korean skincare routine fewer steps,’ ‘watch Instagram stories anonymous’ and ‘Kate Bush not on iTunes.’

Still, amid the dark and dry humor, Really Good, Actually is often deeply relatable and sneakily poignant. Heisey dives into the complexities of healing after the end of a relationship you thought would last forever, the messy chaos of your late 20s and what happens when it feels like all of your friends are moving forward and you’re stuck in the same place.

For fans of millennial-driven novels like Dolly Alderton’s Ghosts and Candice Carty-Williams’s Queenie, this debut novel is better than really good…actually.

7 Books We Can’t Wait to Read in January