Latinx Heritage Month (also known as Hispanic Heritage Month) runs from September 15 to October 15 every year and is a celebration of Latinx cultures from the United States, Mexico, the Caribbean, Central and South America. You could mark the occasion by shopping one of these Latinx-owned fashion and beauty brands or by streaming one of these Latinx TV shows. You could also pay homage by reading one of these 12 new books by Latinx authors, ranging from sweet rom-coms to candid memoirs about identity and community. 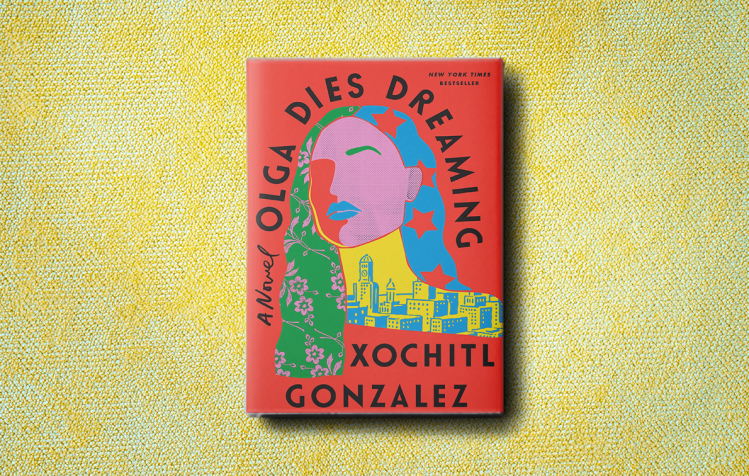 It’s 2017 and sibling duo Olga and Pedro Acevedo are boldfaced names in their hometown of New York City. She’s an in-demand wedding planner for Manhattan's power brokers, while he’s a popular congressman representing their gentrifying Latinx neighborhood in Brooklyn. Behind the scenes, things are far less rosy—especially when their mother, who abandoned them when they were children to advance a militant political cause, comes barreling back as hurricane season heads toward her home in Puerto Rico. This best-selling, International Latino Book Award finalist (2022) by Brooklyn-born debut author Gonzalez touches on political corruption, familial strife and the very notion of the American dream. 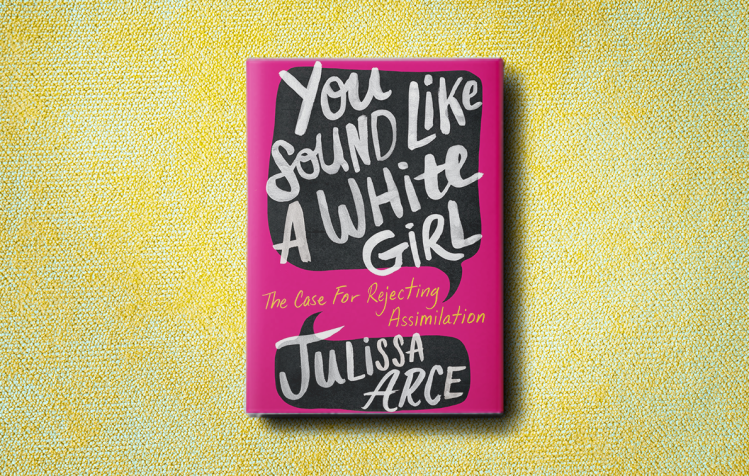 2. You Sound Like a White Girl by Julissa Arce

From the moment she set foot in San Antonio in 1994, Mexican-born Arce was all but forced to assimilate. By high school, a crush told her, “You sound like a white girl.” She'd spent so much time getting rid of her accent so no one could tell English was her second language that in that moment it felt like a compliment. But in hindsight, she realized that the pressure to blend into “American” culture was a way of taming and changing her. In her third book (after Someone Like Me and My (Underground) American Dream), Arce tears apart the lie that assimilation leads to belonging, diving into history and her own story to argue that it’s actually a moving finish line designed to keep Black and brown Americans and immigrants chasing racist American ideals. 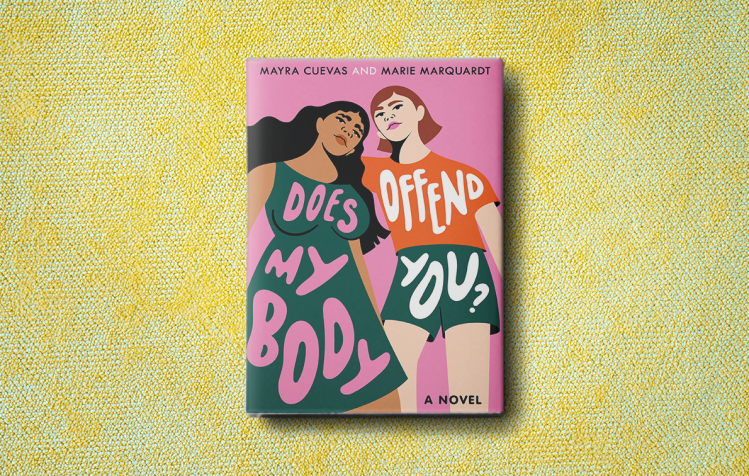 3. Does My Body Offend You? by Mayra Cuevas and Marie Marquardt

When Hurricane María destroyed her home in Puerto Rico, high schooler Malena and her mother were forced to flee to Florida. To make matters worse, she’s completely humiliated when, after going to school bra-less after a bad sunburn, the school administration forces her to cover up. When Ruby, the school's outspoken feminist rebel, notices the new girl is being forced to dress a certain way, she’s unwilling to keep quiet. Unexpectedly finding themselves the leaders of the school's dress code rebellion, the girls have to face their own insecurities, biases and privileges if they want to stand up for their ideals and themselves. 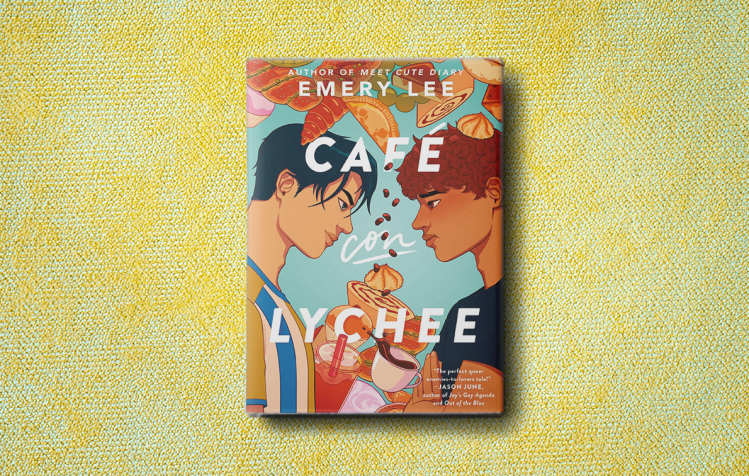 This sweet second book by Black/Asian/Latinx writer Emery Lee (Meet Cute Diary) follows two boys, Theo Mori and Gabriel Moreno, who have always been at odds. Their parents own rival businesses: an Asian American café and a Puerto Rican bakery, respectively. But when a new fusion café threatens both shops, Theo and Gabriel realize that they can only achieve their goals—Theo’s, to leave Vermont to make his own life and Gabriel’s, to come out of the closet and escape the weight of his parents’ expectations—if they work together to win back their customers. A tall order even before romantic feelings between the two begin to bubble to the surface… 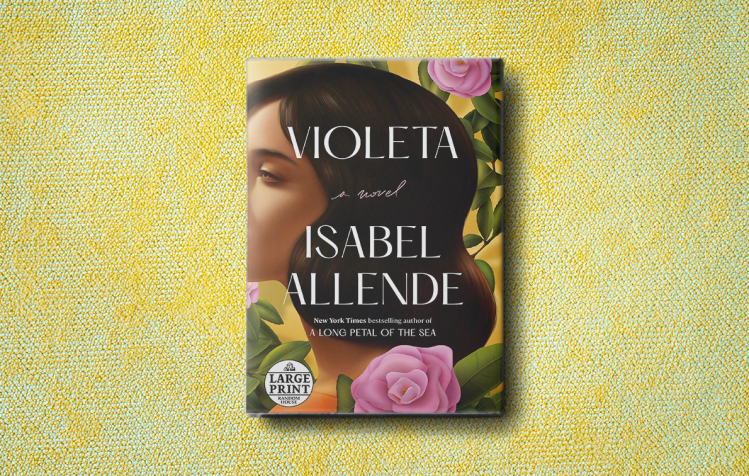 Eighty-year-old Chilean writer Isabel Allende, who was awarded the Presidential Medal of Freedom by Barack Obama in 2014, has been called “the world's most widely read Spanish-language author.” Her latest novel, published earlier this year, is about a girl born in Chile in 1920 who, despite surviving the Spanish flu, sees her life upended by the Great Depression. After retreating to a beautiful but remote part of the country, she meets her first suitor and the novel then tells her life story in a series of letters to him many years later, recounting times of devastating heartbreak and passionate affairs, poverty and wealth, terrible loss and immense joy. Set amid a background of the fight for women's rights, Violeta chronicles the rise and fall of tyrants and ultimately not one, but two, pandemics. 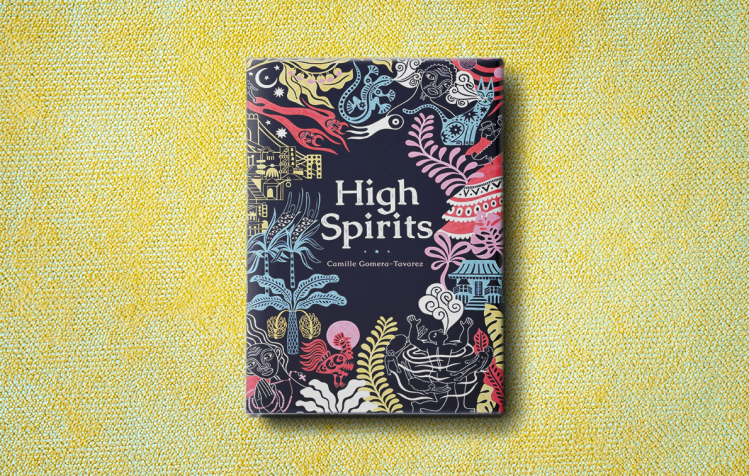 Like One Hundred Years of Solitude, undoubtedly one of the most famous novels by a Latinx author, this debut by Afro-Dominican writer Gomera-Tavarez is set in a fictional town—Hidalpa—and centers on multiple generations of a single family, the Beléns. In 11 interconnected short stories from the Dominican diaspora, these stories explore machismo, mental health, family and identity. 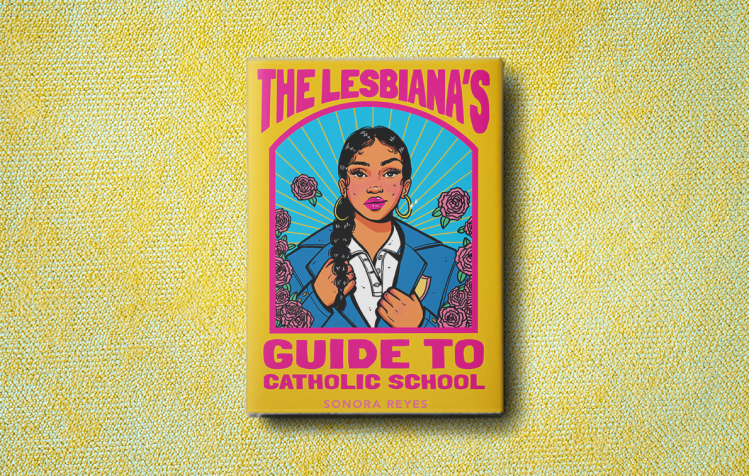 7. The Lesbiana’s Guide to Catholic School by Sonora Reyes

Sixteen-year-old Yamilet is one of the only Mexican kids at her new, mostly white, very rich Catholic school. Not a great position to be in, in her opinion, but at least no one knows she's gay—and Yami intends to keep it that way after being outed by her crush and ex-bestie at her last school. But it’s hard to fake being straight when Bo, the only openly queer girl at school, is seemingly perfect. Equal parts funny, vulnerable and honest, The Lesbiana's Guide to Catholic School, written by queer second-generation immigrant Reyes (they/them)—who, also like their protagonist, attended a Catholic high school—explores the joys and heartaches of living your full truth. 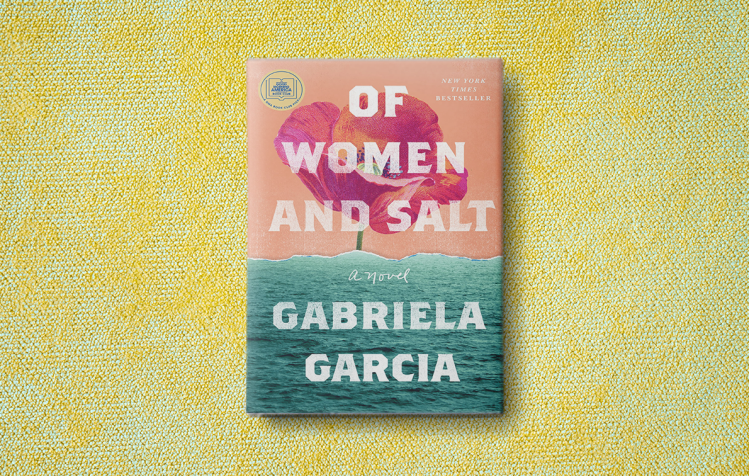 8. Of Women and Salt by Gabriela Garcia

This first novel by Gabriela Garcia, the daughter of immigrants from Cuba and Mexico, is set in present-day Miami (Garcia’s hometown) and follows the daughter of a Cuban immigrant determined to learn more about her family history. When she travels to Cuba to see her grandmother, secrets from the past are destined to erupt. Consider this one a haunting meditation on the choices mothers make, the legacy of memories and the tenacity of women who choose to tell their stories. 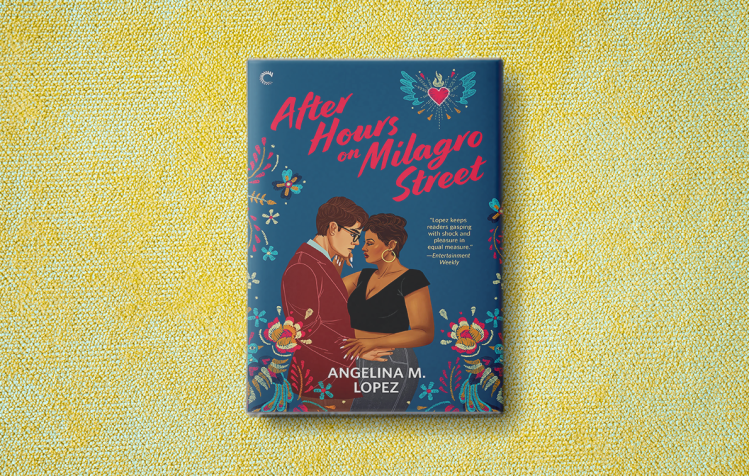 9. After Hours on Milagro Street: A Novel by Angelina M. Lopez

Opposites attract in this rivals-to-lovers romance from Lush Money author Lopez. The story starts when Alex Torres’s grandmother calls Jeremiah Post guapo pobrecito, or poor handsome man. The mild-mannered professor is standing in the way of Alex turning said grandmother’s bar into a viable business—he lives in one of the rooms above it. For his part, Jeremiah doesn't believe Alex has the best interest of her family, their community or the bar's legacy in mind. But when an old enemy threatens the bar and the surrounding neighborhood, Alex and Jeremiah are forced to come together save the home they both desperately need. 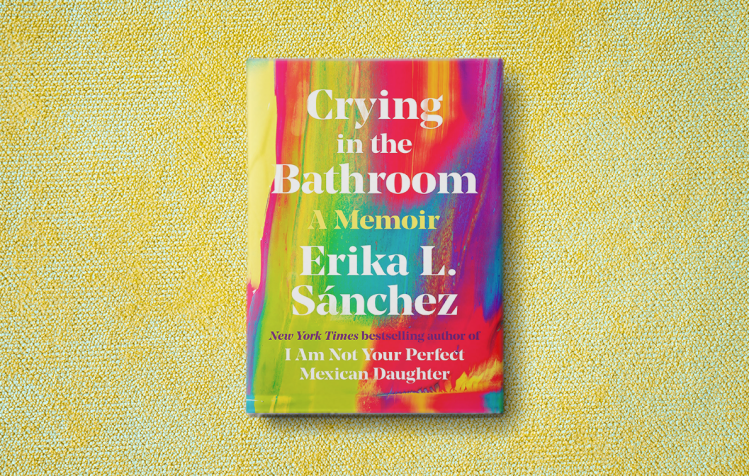 10. Crying in the Bathroom: A Memoir by Erika L. Sánchez

Growing up as the daughter of Mexican immigrants in Chicago in the 90s, Erika Sánchez was a self-described pariah, misfit and disappointment. Twenty-five years later, she's an award-winning novelist, poet and essayist. In this memoir-in-essays, she writes about everything from sex to white feminism to debilitating depression. At turns raunchy, insightful and brutally honest, Crying in the Bathroom feels like talking to your best—and funniest—friend. 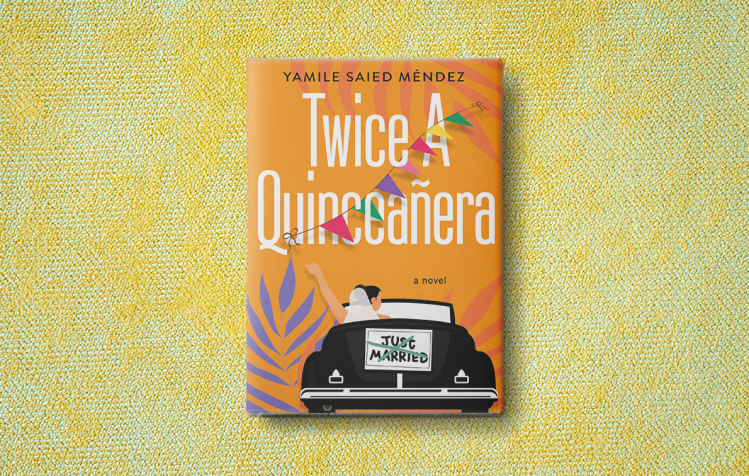 Happily ever after is proving elusive for Nadia, who, a month short of her wedding day and 30th birthday, finds herself standing up to her cheating fiancé for the first time. Frustratingly, that same courage doesn't translate to breaking the news to her Argentinian family. That is, until she finds an article about a Latina woman celebrating herself with a second quinceañera, or Sweet 15. With a wedding venue already paid for and family from all over the world with plane tickets, Nadia decides she'll celebrate her treintañera, her double quinces, in an attempt to become her own biggest fan and hopefully realize her dreams of a second chance at love. 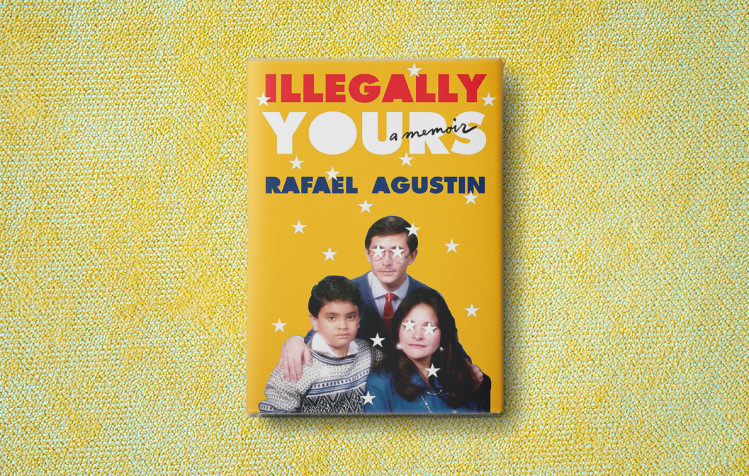 12. Illegally Yours: A Memoir by Rafael Agustin

When he was 16 years old, TV writer Agustin (Jane the Virgin) did what so many 16-year-olds do: decided he wanted to get his driver’s license. Unlike other teens though, this decision forced his parents to tell him that he was undocumented, a secret they’d been trying to hide. All of a sudden, a kid who modeled his entire high school career after American TV shows had no idea what to do or who he was. Illegally Yours is a heartwarming look at how Agustin’s Ecuadorian immigrant family bonded together to navigate school, work and a shared secret life as undocumented Americans, determined to make the best of their always turbulent and sometimes dangerous existence.

The 49 Best Memoirs We’ve Ever Read